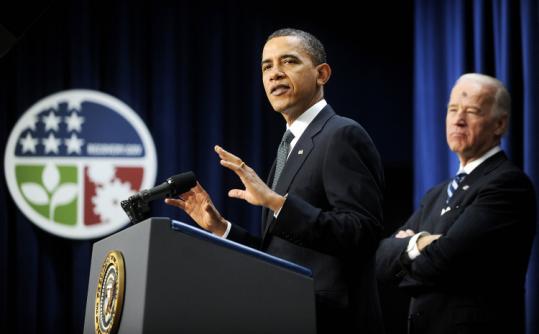 Obama’s remarks capped an extensive push by the administration and its Democratic allies to rehabilitate the public perception of the American Recovery and Reinvestment Act, which critics say has been costly and ineffective.

“No large expenditure is ever that popular, particularly at a time when we are also facing a massive deficit,’’ the president said. “Our work is far from over, but we have rescued this economy from the worst of this crisis. The American people are rebuilding a better future. We will continue to support their efforts.’’

The president ridiculed Republican members of Congress who voted against the legislation last year but have been eager to accept stimulus spending on behalf of their own constituents. He accused them of playing politics by calling the bill a failure “even as many of them show up at ribbon cuttings at projects in their district.’’

And he made fun of GOP lawmakers who he said were unsure whether to clap last month when, during his State of the Union speech, Obama recounted the tax cuts in the act. “They were all kind of squirming in their seats,’’ he said.

The president’s remarks followed an op-ed article in USA Today by Vice President Joe Biden and an aggressive effort by the Democratic National Committee to paint GOP members of Congress as hypocrites.

Republicans refused to give ground. House minority whip Eric Cantor of Virginia said in a statement that, “In the year since the Democrats’ ‘stimulus’ program was enacted, over 3 million jobs have been lost, billions of dollars have been wasted, and an unprecedented debt has been passed on to our children - these are not the results that America hoped for.’’

But Obama insisted that the program had been run “cleanly, smoothly, transparently,’’ and he said the administration will do “everything in our power to turn this economy around.’’

Although most economists agreed on the need for the stimulus, the package was politically fraught from the outset. Republicans charged the White House with letting Democrats lard the bill with pet priorities.

Liberals contended that the package was not big enough, especially given that $70 billion went toward a temporary patch for the alternative minimum tax, which was not seen as a stimulus to the economy.

The White House maintains that the bill passed was the most politically feasible one. The measure got no Republican votes in the House and squeezed through the Senate with three GOP votes.

Independent analysts such as the Congressional Budget Office generally agree that it helped end the recession, added several percentage points to gross domestic product growth, and created or saved at least 2 million jobs.

But with job losses far deeper in 2009 than the administration expected, the stimulus has not kept unemployment from climbing to 10 percent. Republicans have seized on job-creation tallies reported by the recipients of stimulus money, questioning their reliability.