Out of office, Palin reaching new heights as media superstar 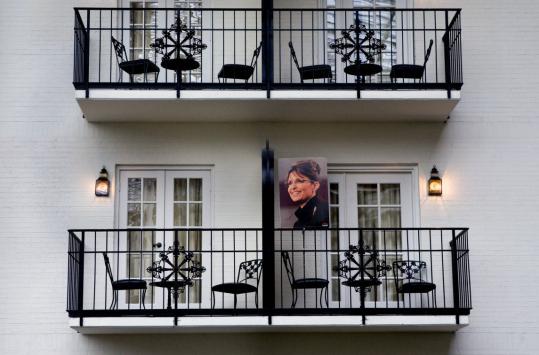 Sarah Palin will address the National Tea Party Convention in Nashville today. A poster adorned a balcony yesterday in the city. Her growing support system could be after any number of goals. (Stephen Crowley/The New York Times)
By Mark Leibovich New York Times / February 6, 2010

WASHINGTON - Without leaving home, Sarah Palin will be able to reach much of her political base, courtesy of a soon-to-be be built television studio in her living room paid for by her newest media patron, Fox News. From her house in Wasilla, Alaska, Palin also sends missives to 1.3 million Facebook “fans,’’ writes newspaper columns, Tweets, and signs copies of her book for donors.

She reads daily e-mail briefings on domestic and foreign policy from a small group of advisers who remained loyal after her tumultuous vice presidential campaign in 2008. And though she has fashioned an image as an anti- establishment conservative, Palin also speaks regularly to a bipartisan nobility of Washington insiders who have helped enrich her financially and position her on the national political stage.

Palin is increasingly vocal and visible, with a series of events scheduled this weekend: delivering a paid speech to the Salina, Kan., Chamber of Commerce last night, headlining a national Tea Party convention in Nashville today, and appearing on behalf of the reelection campaign of Governor Rick Perry of Texas in Houston tomorrow.

This latest foray “Outside’’ (Alaskan slang for the “Lower 48’’) culminates a week in which she achieved a typical run of multimedia ubiquity: She e-mailed a high-profile endorsement of Dr. Rand Paul in a Republican Senate primary in Kentucky. She called - via Facebook - for the resignation of White House chief of staff Rahm Emanuel for using the term “retarded,’’ and announced - via a column in USA Today - that she would attend a Tea Party gathering next month in Searchlight, Nev., the hometown of the Senate Democratic leader, Harry Reid.

Her growing cast of advisers and support system could be working in the service of any number of goals: a possible presidential run, a de facto role as the leader of the Tea Party movement, or a lucrative career as a roving media entity - or all of the above.

Palin represents a new breed of unelected public official operating in an environment in which politics, news media, and celebrity sometimes seem to fuse. Whether she ever runs for anything else, Palin has already achieved the status that has become an end in itself: access to an electronic bully pulpit, a staff to guide her, an enormous income, and none of the bother or accountability of having to govern or campaign for office.

“Few public figures not in office have leveraged the nexus between media and political positioning as Sarah Palin has,’’ said one of her Washington-based advisers, the lawyer Robert Barnett (who negotiated, among other things, Palin’s lucrative deal with Fox News, an arrangement with the Washington Speakers’ Bureau that pays her a reported $100,000 a pop, and a deal with Harper Collins to write her memoir, “Going Rogue,’’ which has already earned her upward of eight figures).

Beyond what her Fox-watchers and Facebookers can see, Palin is quietly assembling the infrastructure of an expanding political operation.

In addition to her longtime spokeswoman, Meghan Stapleton, Palin’s closest aides include members of her former running mate’s staff. Her current operations chief, Jason Recher, was a loyal lieutenant on Palin’s campaign plane - loyal to a point that some top McCain aides believed he was encouraging Palin’s “rogue’’ behavior. (According to internal campaign e-mail messages provided by a former top McCain aide, campaign officials considered firing Recher in October 2008 over “unacceptable’’ and “unprofessional’’ conduct during a rough swing through New Hampshire and Maine.)

“I was incredibly proud to serve John McCain, and I couldn’t be happier to be part of Sarah Palin’s world now,’’ Recher said.