Brown is highly sought after by national GOP 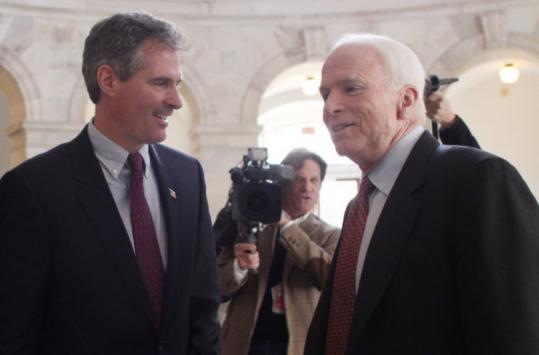 WASHINGTON - Republican groups and candidates across the country are quickly lining up to invite their latest political star, Massachusetts Senator Scott Brown, to campaign for them and help raise money. But so far, Brown has publicly agreed to help just one: John McCain.

Brown has recorded “robocalls’’ for the Arizona senator and this week agreed to travel in early March to Phoenix and Tucson to help McCain fend off a conservative primary challenger, J.D. Hayworth.

Brown has also become the most sought-after speaker for Republican committee fund-raising events across the country, according to a GOP operative who has been briefed on committee requests.

But it is not yet clear whether Brown will accept any more invitations. A top aide said in an e-mail to the Globe yesterday that Brown had “nothing else on the calendar’’ beyond the McCain trip on March 5 and 6.

“Senator McCain was very helpful to Scott Brown when not many people would give him a second look and now he’s going to return the favor by helping Senator McCain in his reelection,’’ Brown spokesman Eric Fehrnstrom said via email.

Brown, in a call for McCain recorded shortly after his Jan. 19 special election victory over Democrat Martha Coakley, told Arizona voters, “When few thought I had a chance of winning, John stood by me and supported my campaign. He was the first one.’’

Clearly other Republican candidates are eager for a similar plug.

“There are a number of campaigns that are interested in harnessing the energy from this win and would welcome Senator Brown’s presence on the campaign trail,’’ said Paul Lindsay, a spokesman for the National Republican Congressional Committee.

Brown’s staff and GOP officials would not discuss details of the other requests.

Because he calls himself a supporter of abortion rights, Brown might not be an obvious choice as a surrogate or guest of honor for GOP candidates across the country.

But his vaunted status as the Republican who won the late Edward M. Kennedy’s Senate seat, establishing himself as a crucial vote against Obama’s health care plan, trumps such policy differences, said Rob Gray, a Boston-based national GOP strategist.

“They’re looking for somebody who’s going to draw crowds at an event or a fund-raiser, and Scott Brown is a huge draw at this point,’’ he said. “You also have a lot of candidates, especially incumbents, who might not be considered as populist as they used to be. Scott can kind of give them and their campaign an injection of populism, because he’s come to represent it.’’

McCain is being challenged by Hayworth on grounds that he is not conservative enough - the same charge made against him by supporters of former Massachusetts governor Mitt Romney during the 2008 presidential campaign. Brown’s participation could enhance the McCain primary as a proxy battle for conservatives who are waging a national insurgency within the Republican Party.

Stu Rothenberg, editor of the nonpartisan Rothenberg Political Report, said that while Brown may be criticized for focusing on party interests instead of staying in Washington to work creating jobs, he could also argue that he is supporting a “big tent’’ Republican Party that includes a self-described maverick such as McCain and independent-minded politician like himself.

Brown, however, must weigh the political risks of the rubber-chicken circuit. Former governor Mitt Romney endured relentless criticism for spending so much time out of state after his second year as governor, traveling the country helping to raise money for GOP gubernatorial candidates as chairman of the Republican Governors’ Association, and raising his own profile to prepare for his 2008 presidential campaign.

Gray said he expects Brown’s inclination will be to stick close to home.

“I talked to him about his Senate district when he was a state senator, and he knew every street, he knew every restaurant, he had knocked on the doors of most of the houses,’’ Gray said.

“He prides himself on knowing his district. His district now is the state of Massachusetts, and even though he won a great victory, he still in a short campaign didn’t have time to get to every single part of the state.’’

But Dave Carney, a national GOP strategist based in New Hampshire, said Granite Staters, who helped make phone calls and canvass for Brown in the final weeks of the election, will be hoping he’ll make an exception for them.

“He represents new, fresh ideas, the ability to take on the status quo Democratic establishment,’’ Carney said, saying Brown’s inbox will be flooded with invites. “I’m sure he’ll get 10 times the number of invitations he can even possibly consider. Around the country, the party and candidates will be asking to do their conventions, to do their Lincoln Day dinners.’’