Sanders a growing force on the far, far left 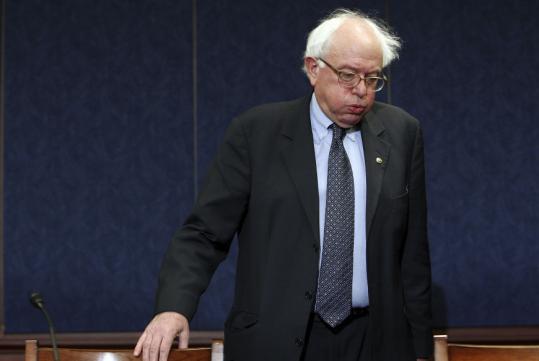 WASHINGTON - The Senate may pride itself on a reputation as the world’s most exclusive deliberative body, but it is turning into just about the only place in America where a self-described socialist can wield raw power.

Now Sanders is aiming at the top of the regulatory pyramid, putting a hold on the renomination of Federal Reserve chairman Ben Bernanke, whom he blames for the country’s financial collapse as a “key architect of the Bush economy.’’

Sanders, however, seems to be hoping that this particular adventure ends not with a peaceful detente but a spectacular confrontation.

“I’m going to do my best to defeat him,’’ said Sanders.

Congress’s only self-described socialist, the 68-year old Sanders gives the appearance of having stepped in from a tornado and speaks as though still trying to be heard over the noise.

His voice may finally be breaking through. Over 16 years in the House, his lonely crusades - which amount to a lifelong campaign to remake American capitalism and social policy - were usually received as little more than glitches in an otherwise well-functioning two-party system. Since his 2006 election to the Senate, however, Sanders has found that a junior senator’s single vote is enough to keep him in the middle of things.

He has emerged as a one-man tea party within the Democratic ranks, an ideological purebred feeding on outsider anger while staying close enough to party leaders to win rewards for his loyalty.

“He operates as most senators do, as someone who steps up and puts up his position forcefully and starts to build a coalition around it,’’ said Robert L. Borosage, president of the Institute of America’s Future, which has worked closely with Sanders to defeat Bernanke. “But when you have a substantial position, rather than just an idiosyncratic one or personal pique, you can use the Senate rules to give it a significant airing.’’

Sanders disappointed liberal allies who had counted on him to mount a one-man stand against the Democrats’ health care bill for omitting a public insurance plan. Sanders, who had introduced an amendment to create a single-payer plan, had initially threatened to oppose any such bill without a public option.

But as the bill moved toward a vote in late December, Sanders uncharacteristically muted his criticism and began privately lobbying Democratic leader Harry Reid on behalf of a pet cause. “I didn’t have to twist his arm,’’ Sanders said

Sanders eventually secured $10 billion to expand a national network of rural medical clinics that he calls “perhaps the most significant and least-known public health program in America.’’ (The Senate bill had one perk just for Vermont: $600 million to cover the state’s previous expansion of its Medicaid program.)

Now Sanders is working the backroom negotiations between House and Senate leaders, to defend his rural health funding and possibly win a further boost.

“He deep down believes he can change American politics,’’ said Larry Sanders, the senator’s older brother and a county councilor in Oxford, England, representing the Green Party. “He’s not afraid of being boring and making the same points for 20 years.’’

This year, Sanders may settle on a fresh target: a proposed -NBC merger. He is working with staff over the winter recess to determine the best way he can wield his senatorial clout to potentially disrupt a deal he fears could establish a new monopolistic media force.

“I think in a democratic society, you don’t want one or two institutions controlling the flow of information,’’ said Sanders.

A longtime critic of mainstream media, Sanders controls the flow of his own information. He wrote radio ads for his congressional campaign with friends around his kitchen table. Before being elected mayor of Burlington in 1981, Sanders developed educational film strips about New England history - and one 30-minute documentary about Socialist presidential candidate Eugene V. Debs - for sale to local schools.

Last year, Sanders began working with muckraking director Robert Greenwald on weekly Web videos designed to build a national constituency around his issues. The resulting series, “Senator Sanders Unfiltered,’’ set him at an ersatz anchor desk with an invitation to rant: a duly elected Andy Rooney with a grasp of monetary policy. (The series is on hiatus.)

“Bernie is one of the only voices that has the perspective to say ‘this is outrageous,’ and to say it with passion and intelligence,’’ said Greenwald, who previously cast Sanders as a talking head in the documentary “Outfoxed: Rupert Murdoch’s War on Journalism’’ (and in an uncredited cameo in the 1988 romantic comedy “ Sweet Hearts Dance,’’ alongside Don Johnson and Susan Sarandon). “He conveys complex stuff in ways people can understand without neglecting the emotional content.’’

Sanders has been waging a colorful war against economic policy makers well before YouTube was available as a repository for his screeds. At one 2003 House committee hearing, he sarcastically invited Federal Reserve chairman Alan Greenspan on a trip to Vermont so he could meet “real people.’’

When Greenspan said that American workers benefited from the world’s highest quality of life, Sanders corrected him in the language befitting a man raised in 1950s Brooklyn. “Wrong, mister,’’ Sanders said.

“You go to Scandinavia, and you will find that people have a much higher standard of living, in terms of education, health care, and decent paying jobs.’’

Sanders said he had not given much thought to Bernanke’s future until he faced him down at a similar hearing last fall. When the central banker dismissed his request for a full accounting of banks receiving Fed loans, Sanders - who had voted against the TARP bailout a year earlier - says he lost confidence.

“The lesson is, if you give unlimited power to people whose whole function in life is to make as much money as they can based on outrageous greed, that’s what they’ll do,’’ Sanders said in an interview this week.

In early December, Sanders placed a hold on Bernanke’s renomination, one of several, from both parties. In practical terms, they are unlikely to deny Bernanke, who was first appointed by George W. Bush, a renewal when his term ends on Jan. 31. It will, however, force Obama to secure 60 votes, rather than 50, to keep Bernanke in place.

“What I’m going to try to do with the opposition to Bernanke,’’ said Sanders, “is force a debate about a new philosophy on Wall Street which is not driven by greed and self-interest.’’

When Senate Republicans tried to slow Democrats from securing a health care vote before Christmas, they used parliamentary rules to demand a reading of all 767 pages of Sanders’s single-payer amendment. He went to the floor to begrudgingly withdraw the amendment, condemning the opposition for a “stalling tactic’’ that he said would “waste time.’’

This week, Sanders insisted that he could not be accused of the same tactic.

“My goal here is not to slow down anything,’’ said Sanders. “My goal is to defeat Bernanke.’’