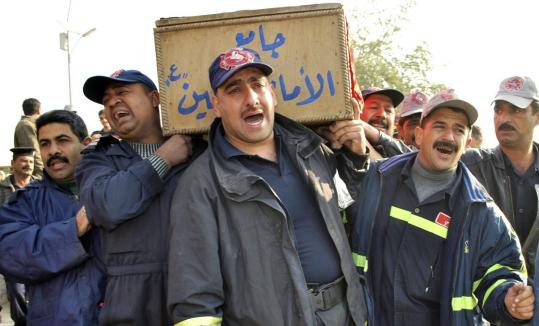 BAGHDAD, Iraq - Defense Secretary Robert M. Gates arrived yesterday for talks with Prime Minister Nouri al-Maliki, but the prime minister said he was too busy to see Gates because he had to defend himself before a Parliament outraged by a recent series of bombings.

US defense officials insisted that Maliki had not rebuffed the defense secretary, but it was not until late yesterday, hours after Gates landed in Baghdad, that they said Maliki had agreed to see him this morning. Gates’s aides scrambled to rearrange his schedule.

“He certainly doesn’t consider it a snub,’’ said Geoff Morrell, the Pentagon press secretary. “He completely understands and respects that the prime minister of this country has to be accountable to the Legislature.’’

Maliki, who is facing elections in March, is under political pressure from rivals who accuse him of security failures following the bombings. He met feverishly for more than six hours yesterday with lawmakers incensed by the five coordinated bombings on Tuesday that, US commanders said, killed 127 people.

Maliki spent part of that time pleading with lawmakers to set aside political differences that he said were undermining security, according to some who took part in a special session of Parliament called after the bombings.

The prime minister, they said, spent a good while blaming Americans for policies that he said were undermining security.

Gates did meet with the Iraqi president, Jalal Talabani, for more than an hour and told him, according to Morrell, that “the bombings are a tragic reminder that it’s not over yet.’’

Gates was not in Baghdad “to point out any flaws’’ in Iraqi security in response to the bombings, Pentagon officials said, although Lieutenant General Charles H. Jacoby Jr., the second-ranking US commanding general in Iraq, told reporters that “there were vulnerabilities that were exposed by the terrorists, obviously.’’

The Islamic State of Iraq, an umbrella group for insurgents linked to Al Qaeda in Iraq, yesterday claimed responsibility for the bombings, saying in a posting on its website that it would “uproot pillars of this government and to demolish its corners.’’ The group also claimed responsibility for large-scale bombings in Baghdad in August and October.

Pentagon officials traveling with Gates and US military officials in Baghdad said the bombings would not alter plans for the withdrawal of more than 50,000 US troops from Iraq next year.

One concern Maliki raised in the meetings with Parliament, lawmakers said, was that the Americans have released thousands of prisoners as they prepare to withdraw and turn responsibility for detainees over to the Iraqis. Maliki, according to the lawmakers, said he believed that many of those former prisoners had returned to violence.

Despite his attempts to ease the political furor that erupted after the attacks, Maliki’s rivals were relentless in their criticism.

Mohammed Salman, a Sunni lawmaker, said Maliki placed all the blame on rules put in place by the Americans and the Parliament’s failure to make changes. “Iraqis should not expect anything from today’s session,’’ he said bitterly.