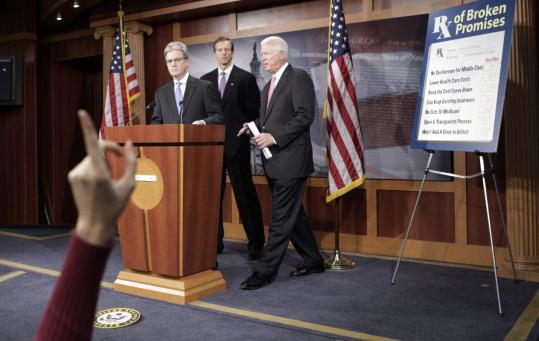 WASHINGTON - The battle over abortion is threatening to derail the health care overhaul package in the Senate, as liberals refuse to accept new abortion restrictions demanded by key moderates, who say that without the limits, they are inclined to vote against the overall bill.

The Senate is expected to defeat, as early as today, a provision banning coverage for abortion under any insurance plans - public or private - that accept federal subsidies. Without moderate Democrats such as Senator Ben Nelson of Nebraska, who introduced the abortion amendment yesterday, it will be very difficult for Democratic leaders to collect the 60-vote supermajority needed for passage.

The current Senate bill would allow insurance plans in government-subsidized exchanges to offer abortion coverage, but only if no federal money were used to pay for it. Current law already bans federal funding of abortions except in cases of rape, incest, or risk to the mother’s life.

“As written, the Senate health care bill allows taxpayer dollars, directly and indirectly, to pay for insurance plans that cover abortion,’’ Nelson said on the Senate floor. “Most Nebraskans, and Americans, do not favor using public funds to cover abortion and as a result this bill shouldn’t open the door to do so.’’

Responded Senator Al Franken, a Minnesota Democrat: “The compromise within the bill is as far as we can go. We cannot negotiate further without literally undermining the compromise we have made on behalf of women’s health in this country.’’

Nelson and Casey did not flatly rule out voting for the final bill, even if it does not include the abortion restrictions they seek. But “it would be very difficult for me to support something without this kind of [antiabortion] language in it,’’ Nelson said.

The fight underscores the delicate nature of the final negotiations on the health care package, which Democratic leaders hope to finish before their holiday recess. With liberals fighting for a strong government-sponsored “public option’’ to compete with private insurers, moderates pushing for diminished government involvement, and all but a few Republicans expected to vote against the final package anyway, Democratic negotiators are anxiously seeking compromises that will make most people happy - or at least, satisfied enough to vote for the final bill.

Senate Majority Leader Harry Reid, increasingly frustrated by what he sees as Republican delaying tactics, delivered a harsh summation of the health care debate to his colleagues yesterday, comparing the battle to the struggles against slavery and for women’s suffrage.

“Instead of joining us on the right side of history, all Republicans have come up with is this: ‘Slow down, stop everything, let’s start over.’ You think you’ve heard these same excuses before, you’re right,’’ Reid said on the Senate floor. “In this country, there were those who dug in their heels and said, ‘Slow down, it’s too early, let’s wait - things aren’t bad enough about slavery.’

“When women wanted to vote, ‘Slow down, there will be a better day to do that,’ ’’ the Nevada Democrat added.

His comments echoed the tamer remarks made by Massachusetts Democratic Senator Paul Kirk and others who have put the health care bill in the same historic category as civil rights. But Republicans took offense at Reid’s suggestion that they were comparable to defenders of slavery and women’s oppression.

While Reid appealed to Democrats’ sense of history, other senior Democrats worked the details to bring factions of the Democratic caucus together.

Scrambling for a compromise on the creation of a public health insurance option, a group of 10 senators - five moderates and five liberals - is considering a proposal that would require the government to negotiate with insurers to establish national nonprofit plans, according to senators and an aide with knowledge of the talks.

To appease liberals, senators are considering other ideas designed to make insurance more affordable. Possibilities include covering more people through Medicaid, the government program for the poor, and allowing people age 55 to 65 to pay their own premiums to “buy in’’ to Medicare, which now covers Americans 65 and older.

On the abortion issue, Nelson’s amendment is very similar to the provision put in the House bill and is strongly supported by antiabortion groups, including the US Conference of Catholic Bishops. “This amendment does not restrict abortion, or prevent people from buying insurance covering abortion with their own funds. It simply ensures that where federal funds are involved, people are not required to pay for other people’s abortions,’’ the bishops wrote senators yesterday.

Abortion rights groups vehemently disagree, decrying what they see as a back-door way of further restricting abortion. Women who buy insurance through government-sponsored exchanges will not be able to get abortion coverage even though they are paying their own health-care premiums, noted Nancy Keenan, president of NARAL Pro-Choice America. “It goes far beyond current law,’’ she said.

The issue emerged as one of the most contentious in the run-up to today’s Democratic US Senate primary in Massachusetts. While Attorney General Martha Coakley and her leading rival, Representative Michael Capuano, told voters they would vote against the health care bill if it included the abortion restrictions, Boston Celtics co-owner Stephen G. Pagliuca and City Year cofounder Alan Khazei said they would support any version of the health bill with the support of the Democratic majority in Congress.

Senator Christopher Dodd, a Connecticut Democrat and a leading negotiator on the health care package, said he was hopeful that compromise language could be worked out before the entire health care bill comes up for an up-or-down vote. And he said it was encouraging that Nelson was coming to negotiating sessions.

“For someone people assume is going to be against all of this,’’ Dodd said, “he’s playing a very active role.’’

Lisa Wangsness of the Globe staff contributed to this report.