Another McGovern takes on a war 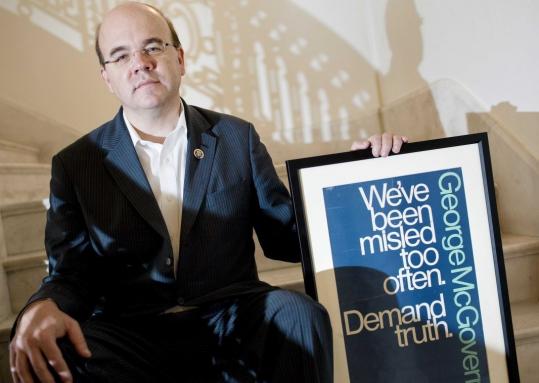 WASHINGTON - Representative James P. McGovern, a political activist since he was a schoolboy in Worcester, walked into his congressional office yesterday and proudly pointed to a 1972 presidential campaign poster on his wall: “We’ve been misled too often. Demand Truth. George McGovern.’’

It was a moment that brought Jim McGovern full circle. As a seventh-grader during the Vietnam War, he passed out antiwar campaign literature for the former South Dakota senator, and as a college student he interned in the senator’s Washington office.

Now the Massachusetts Democrat, a 50-year-old whose parents still own a liquor store in Worcester, is assuming his mentor’s mantle in more than name (they are not related). He has become one of the most outspoken opponents to President Obama’s Afghanistan strategy, putting forward proposals to cut off funding for the 30,000 additional troops Obama plans to send there and to demand a clear-cut exit strategy.

McGovern said he has no qualms about tak ing on Obama. Even those with the potential to be “great presidents’’ make mistakes, he said. “There is going to be a fight on this. The question is whether we get it sooner or later.’’

While his quest may seem as quixotic as his mentor’s presidential run and has made him a lightning rod for those who deem his antiwar stance misguided, the congressman says he is pushing forward in the belief that every antiwar campaign begins with modest steps.

“McGovern was right’’ about Vietnam, the congressman said of the former presidential candidate. And he believes that he will be proven right about Afghanistan.

“The mission in Afghanistan does not reflect what Congress voted for in 2001,’’ McGovern said of the resolution authorizing the military action following the terrorist attacks of Sept. 11, 2001. “In 2001 we voted to dislodge Al Qaeda. Al Qaeda moved. They are in a different neighborhood now, a different country: Pakistan. What the hell are we doing in Afghanistan? Why do we need 100,000 American troops to go after less than 100 members of Al Qaeda that might be left in Afghanistan. It makes no sense to me.’’

McGovern’s emergence on the issue also makes him the most visible antiwar leader in Congress from Massachusetts, partly due to a confluence of factors. Senator John F. Kerry, who rose to fame by opposing the Vietnam War, generally supports Obama’s troop surge. The late Senator Edward M. Kennedy, who led the opposition to the Iraq war, has been replaced by Paul G. Kirk Jr., who opposes the surge but will be in office only a few more weeks. That has provided an opening for McGovern.

When most of the Massachusetts delegation met Wednesday night at a Chinese restaurant on Capitol Hill to discuss the Afghanistan strategy Obama had announced the night before, Kerry was openly in favor (although with some qualifications), while McGovern said he was strongly against it.

McGovern said it is “a little bit ironic’’ that Kerry is a leader in the prosurge effort. Kerry played down the disagreement, praising McGovern as “enormously thoughtful’’ and saying in a statement that the war “presents as thorny an issue as you’ll find in American foreign policy. There are no good options, and even thoughtful people who care and think alike are inevitably going to find themselves in different places.’’

George McGovern, who came to Worcester last month to celebrate his protégé’s birthday, is counting on the congressman to warn Obama that the mistakes of Vietnam are being repeated.

“It is very similar,’’ the former senator, 87, said in a telephone interview. Former president Lyndon Johnson “thought that by putting in more and more troops into Vietnam that we could make a mistaken war become correct. It just made it worse,’’ he said.

But others, including Obama, dispute the Vietnam analogy, pointing out that the Sept. 11 attacks were plotted from Afghanistan and warning that it could become a terrorist sanctuary again.

Having learned his skills as a top aide to the late J. Joseph Moakley, the South Boston Democrat, Jim McGovern is following a familiar antiwar strategy focused on funding. As vice chairman of the Rules Committee, he has one of the most powerful positions in Congress, enabling him to be the traffic cop on countless pieces of legislation. He also has a key post on the Budget Committee.

In May, McGovern vocally opposed a funding bill that included money for Obama’s request for 17,000 more troops in Afghanistan. McGovern’s action infuriated the White House. Obama’s chief of staff, Rahm Emanuel, who had worked closely with McGovern during his time as a congressman from Illinois, screamed obscenities at him in a phone conversation, warning that the president’s agenda was at stake, according to McGovern. Emanuel did not respond to a request for comment.

That funding bill eventually passed, but McGovern then made another proposal that angered the White House. He authored a measure that would require the administration to provide Congress with a detailed “exit strategy’’ for the military to leave Afghanistan. In June, the measure failed, but gained 138 backers, including a majority of Democrats and seven Republicans. While this week, Obama proposed pulling out troops beginning in July 2011, McGovern said that “no one believes’’ that it is a commitment for withdrawal on that schedule.

Tom Andrews, a former US House member from Maine who is chairman of the Win Without War Coalition, said McGovern’s call for an exit plan has been effective, calling it “a platform from which to build’’ an effort in Congress to end the war.

But Tarah Donoghue, a spokeswoman for the Massachusetts Republican Party, criticized McGovern’s position, saying, “Winning the war in Afghanistan is critical to our security.’’ So far, however, the GOP has not come up with a candidate to run against McGovern next year.

McGovern wants the US military mission to be replaced with a massive humanitarian effort. With troops mostly withdrawn, he said, the United States could build schools and do other works that he said would be more helpful to winning support from Afghans.

He acknowledged that seeking a vote on the funding for Obama’s troop surge could take months, perhaps after many of them are already in Afghanistan, which would make a funding cutoff even more politically difficult.

“There are some people who are very anxious about the policy, but say, ‘Let’s low-key it a little bit,’ ’’ McGovern said. But he said he hopes to win over skeptics by arguing that there should at least be a vote before more Americans are put in harm’s way.

“There’s no way,’’ he said, “members of Congress can avoid taking responsibility for this.’’