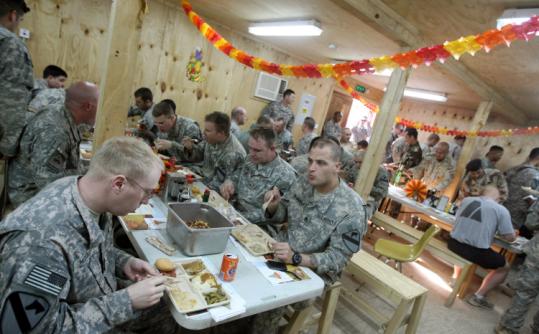 Obama and Representative Mike Pence, Republican of Indiana, singled out US service members at home and abroad for special thanks before saying what they think should be done to fix the economy.

“As much as we all have to be thankful for, we also know that this year millions of Americans are facing very difficult economic times,’’ Obama said in his weekly radio and Internet address. “Many have lost jobs in this recession - the worst in generations. Many more are struggling to afford health care premiums and house payments, let alone to save for an education or retirement. Too many are wondering if the dream of a middle-class life - that American dream - is slipping away.’’

Obama said his administration has acted by cutting taxes for nearly all working men and women and for small businesses and by extending unemployment benefits and health coverage for millions out of work.

Obama said he will meet next week with business owners, labor leaders, and nonprofit officials to talk about additional efforts to spur job creation.

“It is my fervent hope - and my heartfelt expectation - that next Thanksgiving we will be able to celebrate the fact that many of those who have lost their jobs are back at work and that as a nation we will have come through these difficult storms stronger and wiser and grateful to have reached a brighter day,’’ he said.

Pence, the chairman of the House Republican Conference, said in the GOP’s weekly address that Obama had promised the $787 billion economic stimulus package would keep unemployment, now at 10.2 percent, below 8 percent.

Yet, Pence said, the administration insists the stimulus plan is working.

“In the city and on the farm, as millions of American families struggle to balance their checkbooks this holiday season, they watch in astonishment as Washington spends billions of dollars it doesn’t have,’’ he said.

“And what is the White House’s answer to our struggles? Another meeting next week. A ‘jobs summit,’ and most likely another proposal to grow government, raise taxes, and place more debt on the shoulders of our children and grandchildren.’’

Pence said Obama and the Democrat-controlled Congress have taken the economy “from bad to worse with their failed economic agenda and big government plans,’’ and now want the government to take over the health care system.

“The way to stimulate this economy and help working families is to let Americans keep more of their hard-earned money, not taking more from their wallets,’’ he said. “Republicans have proposals to get our economy moving again, to achieve energy independence and lower the cost of health care.’’

President makes calls on the holiday
WASHINGTON - President Obama enjoyed a quiet first Thanksgiving at the White House, telephoning US servicemen and women stationed around the world and spending time in the company of his family and friends.

Obama placed calls from the Oval Office to 10 US servicemen and women - two each in the Army, Navy, Air Force, Marines, and Coast Guard - stationed in combat zones in Iraq, Afghanistan, and the Arabian Gulf.

The commander in chief, who spent the past several weeks conducting an intensive review of the US strategy in Afghanistan, called to wish them Happy Thanksgiving and to let them know that he and first lady Michelle Obama are “truly thankful for their service and sacrifice on behalf of the nation,’’ according to a White House statement.

Obama plans Tuesday to announce the results of that review - a new battle plan for Afghanistan.