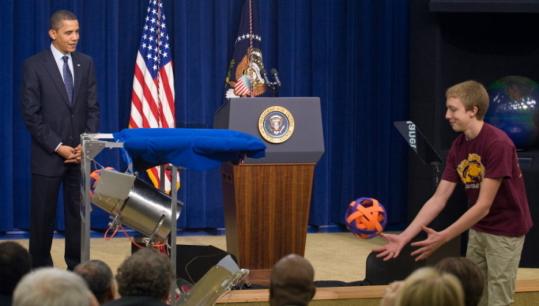 WASHINGTON - A leading Senate Democrat said yesterday his party is determined to push through a health care overhaul bill with or without Republican support because the “system is broken.’’

“We prefer to go at it with Republicans if we can reach compromises in some areas,’’ said Senator Charles Schumer of New York. “But we’re not going to not pass a bill.’’

Republicans, for their part, wasted no time going after Democratic moderates who delivered a Senate victory Saturday for President Obama and who hold the legislation’s fate in their hands. The 60-39 vote overcame a procedural hurdle and allowed floor debate to start after Thanksgiving on Majority Leader Harry Reid’s 10-year, $979 billion bill. Senate Democrats hope to finish their bill by Christmas, but it remains unclear whether legislation will reach Obama’s desk this year.

A state Republican Party leader accused Senator Ben Nelson of Nebraska, one of those wavering moderate Democrats, of trying to have it both ways by talking conservative back home and voting with liberals in Washington.

Nelson has said he won’t vote for a final bill unless it takes into account his concerns about limits on abortion funding, as well as his opposition to a new government-run insurance plan.

Another moderate Democrat, Senator Blanche Lincoln of Arkansas, said yesterday she also could not support “a government-run, government-funded’’ public plan. With hundreds of thousands of uninsured people in her state eligible for existing government programs such as Medicaid, she said getting them signed up should be the first priority.

Congressional Democrats are trying to resolve differences within their rank and file over the public option, as well as abortion and taxes. Appearing on NBC’s “Today’’ show, Schumer said, “We all know we have to give a little.’’

Obama says economy buoyed by ‘core strengths’
WASHINGTON - President Obama said yesterday the nation’s economy is in good shape for the long term thanks to “core strengths’’ such as its universities, its innovation, and a dynamic workforce.

But he also noted again how 2009 has been a sobering year for millions of newly unemployed people.

“We cannot sit back and be satisfied given the extraordinarily high unemployment levels that we’ve seen,’’ Obama said in wrapping up a pre-Thanksgiving session with his Cabinet as other senior aides packed the meeting room. “We have only taken the first step in curing our economy.’’

The unemployment rate stands at a 26-year high of 10.2 percent, overshadowing more upbeat indicators such as a return in growth of the overall economy.

Obama told reporters that the emphasis of the first meeting of the full Cabinet in weeks was on job creation and that he won’t let up “until businesses are investing again and businesses are hiring again.’’

In advance of a Dec. 3 jobs summit at the White House - bringing together corporate CEOs, labor leaders, academics, and others - some fellow Democrats and friendly advocacy groups have been chiding the administration for not doing more to stem unemployment.

India, US prepare to sign memo on cooperation
WASHINGTON - Prime Minister Manmohan Singh of India said yesterday that Indian and US officials will sign a memorandum intended to improve cooperation on energy security, clean energy, and climate change.

“This will provide a framework for pursuing bilateral cooperation in specific areas,’’ Singh said.

Speaking on the eve of an elaborate welcome at the White House planned by President Obama, the prime minister did not provide details of the memorandum he said will be signed today. He will use the White House visit to ease differences on global warming with the United States, ahead of an international conference next month.

India has watched with wariness as Obama’s administration has lavished attention on rivals Pakistan and China. Now, Obama is trying to ease Indian worries by honoring Singh with the first state visit of his presidency.

The United States sees India as crucial to the US-led fight against extremists in Pakistan and Afghanistan, as a counterweight to China, and as key to efforts to settle world trade and climate-change deals.

President Obama said yesterday he would convene a national science fair next year to honor young inventors with the same gusto that college and professional athletes celebrate their victories at the White House.

He also announced a public-private partnership, including $260 million in companies’ donations to take science into more classrooms.