Acceptance leads users to go public in support of drug 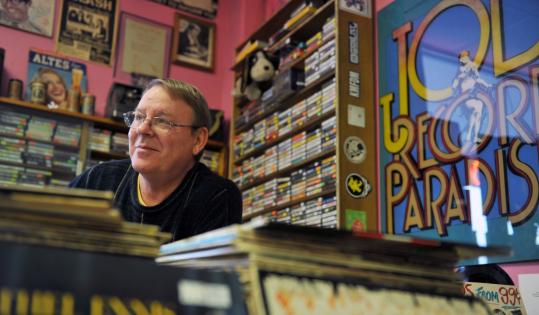 “I know literally hundreds of people my age who smoke. They are upright citizens, good parents who are holding down jobs. . . . Pot is fun,’’ said Joe Lee, a vintage-record dealer in Rockville, Md. (Washington Post/ Bill O’Leary)
By Steve Hendrix Washington Post / November 22, 2009

WASHINGTON - Smoking pot isn’t what it used to be for Joe Lee, 62, a vintage-record dealer in suburban Rockville, Md.

In the late 1960s, as an art student in Baltimore, he kept his landlord in a constant state of suspicion, with clouds of marijuana smoke poorly masked by clouds of incense.

These days, after four decades of regular use, cannabis is a smaller deal. Lee takes a few hits every other day or so, when he wants to listen to music or laugh with a few friends on the porch. And he’s happy to talk about it.

“There’s gotten to be greater tolerance, that’s for sure,’’ said Lee, the son of the former acting governor of Maryland, Blair Lee III. “I know literally hundreds of people my age who smoke. They are upright citizens, good parents who are holding down jobs. You take two or three puffs, and you’re good to go. I’m not a Rastafarian; I don’t treat this as some holy sacrament. But pot is fun.’’

A federal survey of Americans’ drug use shows that Lee and his friends are not the only baby boomers approaching the age of retirement much as they departed the Age of Aquarius - with an occasional case of the munchies. The government’s most recent survey showed that the share of marijuana users ages 50 to 59 increased from 5.1 percent in 2002 to almost 10 percent in 2007.

Some of those users are empty-nesters, returning to the drug decades after their pot habits gave way to raising children and building careers. Others, like Lee, have used pot all along, researchers said.

“We’re concerned by the public health impact of this,’’ said Peter Delany, who heads the office in the Substance Abuse and Mental Health Services Administration that conducts the survey. Marijuana could present special problems for older users, he said, including unknown interactions with prescription drugs. “Doctors need to be more sensitive to it,’’ he said. “They may ask older patients about alcohol now but not think to ask about illicit drug use.’’

But some older marijuana users say they are living evidence that smoking cannabis does not preclude a normal life, and more older smokers seem more comfortable than at any point since their teen years with going public - a tribute, they say, to a big boost in public tolerance.

In parts of California, licensed medical marijuana dispensaries have become as common as In-N-Out Burger stands. At least 13 other states allow some form of pot use for medicinal purposes, and the Obama administration announced last month that federal prosecutors would no longer go after medical users in those states, a policy shift that activists hailed as a watershed.

Recently, in a reversal, the American Medical Association called for a review of marijuana’s status as a Schedule 1 hard drug alongside LSD and PCP and for more study of its medicinal potential.

Nationally, support for legalization has jumped to its highest level in 40 years, up in a Gallup poll from 31 percent in 2000 to 44 percent last month.

In much of American pop culture, the taboo against smoking pot lies largely in ashes.

All of which adds up to what some commentators see as marijuana’s steady march into the mainstream. Conservative pundit George Will recently declared the drug “essentially legalized’’ in California and predicted that the rest of the nation would follow suit.

That shift in atmosphere has encouraged more older users to take their pot habits public.

“I don’t think more people in their 50s are smoking marijuana. I think we are just more comfortable talking about it,’’ said Rick Steves, who writes travel guidebooks and hosts a public TV series on travel. At 54, the clean-cut guru of mass-market European tourism has begun to present himself as the hard-working, successful face of the longtime smoker.

“Even my pastor knows I smoke pot,’’ said Steves, recently named Lutheran activist of the year for his work on international poverty relief. “It’s just not that big a deal anymore.’’

Although young users generally go to some lengths to keep their pot use under wraps, those of a certain age - especially those not in danger of being kicked out of school or subjected to drug tests - seem more likely to talk about their usage.

“It seems the stereotype of the marijuana user as a goofy teenage boy has begun to change,’’ said Shelby Sadler, 48, a freelance editor from Rockville. She described a wide circle of professional friends in the Washington area who use the drug socially. “They are less inclined to hide it now. The kids are gone, and they no longer have to worry about losing their jobs because they’re the ones doing the hiring.’’