Mohammed, four others to be tried in civilian court; Death penalty possible for admitted terrorists 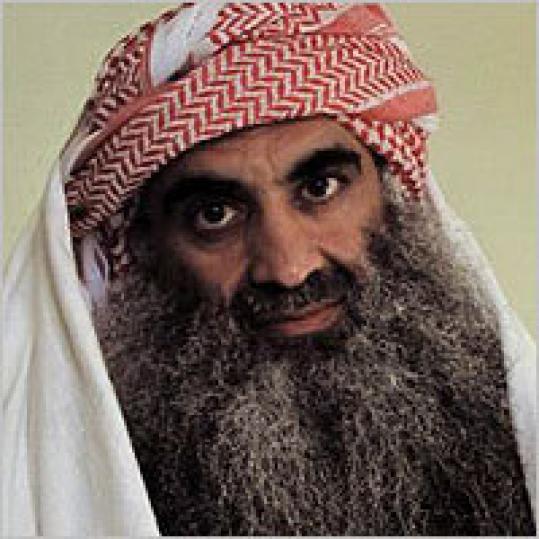 WASHINGTON - Khalid Sheikh Mohammed, the self-proclaimed mastermind of the Sept. 11, 2001, attacks, and four coconspirators will be tried in Manhattan federal courthouse less than a mile from ground zero, the Justice Department announced yesterday, the most concrete demonstration yet of the Obama administration’s desire to reassert the primacy of the criminal justice system in responding to terrorist acts.

In planning to transfer Mohammed and his codefendants from the US military detention center at Guantanamo Bay to civilian court, the administration takes a significant step toward reversing the Bush administration’s practice of declaring suspected members of Al Qaeda and related groups to be unlawful enemy combatants subject to extrajudicial or military detention. The decision also adds some momentum to the administration’s lagging effort to close the military prison camp on the southeastern tip of Cuba.

“For over 200 years, our nation has relied on a faithful adherence to the rule of law to bring criminals to justice and provide accountability to victims,’’ said Attorney General Eric Holder. “Once again we will ask our legal system to rise to that challenge, and I am confident it will answer the call with fairness and justice.’’

But the effort to criminalize the events of Sept. 11 and accord Mohammed the full panoply of rights in a federal trial has infuriated and dismayed Republicans, as well as some organizations of victims’ families. They argued that military commissions at Guantanamo Bay offered a secure environment, a proper forum for war crimes, and adequate legal protections for a ruthless enemy.

“The Obama Administration’s irresponsible decision to prosecute the mastermind of the 9/11 attacks in New York City puts the interests of liberal special interest groups before the safety and security of the American people,’’ House minority leader John Boehner, Republican of Ohio, said in a statement. “The possibility that Khalid Sheik Mohammed and his coconspirators could be found ‘not guilty’ due to some legal technicality just blocks from Ground Zero should give every American pause.’’

The trial of the man the 9/11 Commission Report called a “self-cast star - the superterrorist’’ will probably draw extraordinary attention and could burrow into the raw details of the Sept. 11 plot and its fallout, from its conception in Afghanistan to the treatment of Al Qaeda prisoners at CIA “black sites’’ around the world. Officials said they hope that in placing Mohammed before a jury of ordinary Americans, he will be denied the warrior status he craves.

Mayor Michael Bloomberg of New York and other officials applauded the decision, but on the streets of lower Manhattan, the financial district wreathed in ash when the World Trade Center came down in 2001, reaction was more nuanced.

“The jurisdiction of the crime is New York, so I guess it makes sense,’’ said Gwen Taylor, an office worker grabbing lunch at the All American Diner. “However, I would rather try them in Guantanamo. Bringing them here and trying them here may cause other radicals to show up and protest. Or it might provoke them into doing something in support of their brethren. But I really understand why they have to do it here.’’

Shaka Trahan, 34, displayed no such ambivalence. “Wow,’’ he said. “I look at it like this: Wherever the crime took place, that’s where they should try them.’’

Speaking to reporters in Japan, President Obama defended Holder’s decision. “I am absolutely convinced that Khalid Sheikh Mohammed will be subject to the most exacting demands of justice,’’ Obama said. “The American people insist on it, and my administration will insist on it.’’

Although Guantanamo Bay will soon lose some of its most infamous inhabitants, the administration has all but acknowledged that the facility itself cannot be closed by Jan. 22, the one-year deadline Obama set in an executive order shortly after taking office. Bruising and often unexpected political, diplomatic, and legal problems have slowed the administration’s effort to empty the military detention center.

The four other alleged key players in the Sept. 11 conspiracy to face trial in Manhattan are Ramzi Binalshibh, a Yemeni; Waleed bin Attash, a Yemeni better known as Khallad; Ali Abd al-Aziz Ali, Mohammed’s nephew and a Pakistani also known as Ammar Al-Baluchi; and Mustafa Ahmad al-Hawsawi, a Saudi.

The administration is required to give Congress 45 days’ notice of its intent to transfer detainees so that the Sept. 11 defendants will not be immediately moved to the United States.

The administration also announced that Abd al-Rahim al-Nashiri, a Saudi accused of orchestrating the 2000 bombing of the USS Cole when it was docked off the coast of Yemen, will be tried at a military commission. Holder said one factor in deciding to keep Nashiri’s case within the military justice system was that the attack targeted a US warship docked in foreign territory, rather than a civilian target on American soil.

Seventeen sailors were killed in the bombing.

The cases of four other detainees who had been charged in military tribunals will remain in the military system, officials said. They include Omar Ahmed Khadr, a Canadian citizen who is accused of killing a US Army sergeant in a 2002 grenade attack in Afghanistan.

His case is controversial because he was a minor at the time of the alleged attack.

While in CIA custody, Mohammed was subjected to coercive interrogation techniques, culminating in waterboarding. Asked about the prospect that defense lawyers could use the acknowledged waterboarding to derail the case, Holder said he would not have authorized the prosecutions were he not convinced of success.

Prosecutors must still present evidence before a New York grand jury, and while the specific charges they will seek remain unclear, Holder said yesterday he was all but certain to order the death penalty against the five Sept. 11 conspirators.