Snowe trying to include plan as a fallback 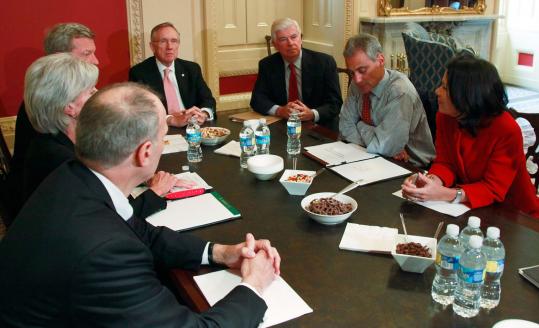 WASHINGTON - As the White House and congressional leaders turned in earnest yesterday to working out big differences in the five health bills, perhaps no issue loomed as a greater obstacle than whether to establish a government-run competitor to the insurance industry.

One day after the Senate Finance Committee approved a measure without a “public option,’’ the question on Capitol Hill was how President Obama could reconcile the deep divisions within his party on the issue. All eyes were on Senator Olympia Snowe, Republican of Maine, whose call for a “trigger’’ that would establish a government plan as a fallback is one of the leading compromise ideas.

Two administration officials, speaking on condition of anonymity, said the White House looked favorably on the Snowe plan. But liberal Democrats maneuvered against it yesterday, saying Snowe, the lone Republican to vote in favor of the Finance Committee bill, was gaining undue influence in the talks.

Of the many difficult decisions remaining - including how to pay for a health overhaul and how many people will be left uninsured - few carry as much political weight for the president as the public option. The plan, which would be available only to people who do not get health care through their employers, has become a proxy for a larger debate over where Obama is taking the country.

With Democrats split, an array of compromises are being floated - including the nonprofit cooperatives contained in the Finance Committee bill and the latest idea to capture some Democrats’ fancy, leaving the public option to the states. But economists say few would fulfill Obama’s stated goal of injecting “choice and competition’’ into the marketplace.

Obama’s health care adviser, Nancy-Ann DeParle, said she was convinced Democrats can “find convergence’’ without the president. She and several other officials, including Rahm Emanuel, the chief of staff, and Peter R. Orszag, the budget director, met yesterday with Senator Harry Reid, Democrat of Nevada, the majority leader, to work on how to merge the Senate’s two versions of the legislation.

Aides say Obama has reviewed the alternatives to the public option but has not settled on which, if any, he prefers. But in private conversations with Snowe, Obama has brought up her idea for a “trigger’’ that would create a government-run plan in states where at least 5 percent of residents lacked access to affordable care. One senior White House official called the idea “very reasonable.’’

As Obama originally envisioned it, the public option would be a national government plan, offered on a health exchange as part of a menu of plans available to the uninsured. The idea, he has said, was to “keep the private sector honest,’’ and hold down costs by injecting more competition into the system through an entity that would not put profits first.

Insurers balked, saying it would put them out of business. Conservatives called Obama a socialist. Ultimately, the president dialed back, calling the public option “just a sliver’’ of his plan.

The five bills making their way through Congress - three in the House and two in the Senate - show how far lawmakers are from consensus.

The most robust public plan, favored by liberals and included in two of the House bills, would tie reimbursement rates for health care providers to those paid by Medicare, reducing the nation’s overall health care bill by $110 billion over 10 years, according to estimates the nonpartisan Congressional Budget Office has provided to lawmakers.

Meanwhile, insurance companies and unions pushed back hard yesterday against the health care legislation that could cost their members billions of dollars.

America’s Health Insurance Plans, the industry’s trade group, is running a TV ad in six states criticizing the bill’s call for more than $100 billion in cuts in Medicare Advantage, under which private insurance companies provide Medicare benefits. The ad says 10 million senior citizens would be asked “for more than their fair share’’ if the bill passes.