Activists rally in D.C. to press Obama on gay rights 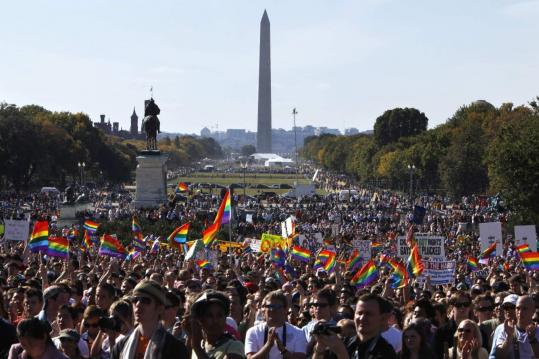 WASHINGTON - Tens of thousands of gay rights supporters marched yesterday from the White House to the Capitol, demanding that President Obama keep his promises to allow gays to serve openly in the military and work to end discrimination against gays.

Rainbow flags and homemade signs dotted the crowds filling Pennsylvania Avenue in front of the White House as people chanted, “Hey, Obama, let mama marry mama,’’ and, “We’re out, we’re proud, we won’t back down.’’

A few counterprotesters also joined the crowd, which extended several blocks by the afternoon.

Jason Yanowitz, 37, a computer programmer from Chicago, held his daughter, 5-year-old Amira, on his shoulders. His partner, Annie, had their 2-year-old son, Isiah, in a stroller. Yanowitz said more straight people were turning out to show their support for gay rights.

“If somebody doesn’t have equal rights, then none of us are free,’’ he said.

Keynote speaker Julian Bond, chairman of the NAACP, linked the gay rights struggle to the civil rights movement, saying gays and lesbians should be free from discrimination.

“Black people of all people should not oppose equality, and that is what marriage is all about,’’ he said. “We have a lot of real and serious problems in this country, and same-sex marriage is not one of them. Good things don’t come to those who wait, but they come to those who agitate.’’

Some participants in the National Equality March woke up energized by Obama’s pledge to end the ban on gays serving openly in the military during a speech to the nation’s largest gay rights group Saturday night.

The chairman of the Senate Armed Services Committee said yesterday that Congress would need to muster the resolve to change the “don’t ask, don’t tell policy,’’ a change that the military may be ready for.

“I think it has to be done in the right way, which is to get a buy-in from the military, which I think is now possible,’’ said Senator Carl Levin, a Michigan Democrat.

Obama’s political energies have been focused on two wars, the economic crisis, and health care legislation, though he pledged unwavering commitment even as he wrestled with those issues.

March organizer Cleve Jones, creator of the AIDS Memorial Quilt and a protégé of gay rights pioneer Harvey Milk, said he had initially discouraged a rally earlier in the year. But he and others began to worry Obama was backing away from his campaign promises.

“Since we’ve seen that so many times before, I didn’t want it to happen again,’’ Jones said. “We’re not settling. There’s no such thing as a fraction of equality.’’

But there were some notable names among the crowd: Cynthia Nixon, a cast member from HBO’s “Sex and the City’’ who hopes to marry partner Christine Marinoni next year, and Judy Shepard, who became an advocate for gay rights after her son Matthew was killed because he was gay.

Many marchers were outraged after the passage of California’s Proposition 8, which canceled the right of gays to get married in the state.

Kipp Williams, 27, a San Francisco resident, said he moved to California from the South seeking equality but realized after Proposition 8 passed that gay people are second-class citizens everywhere.

“There is no exception to the equal protection clause of the 14th Amendment of the Constitution,’’ Williams said.