US bill could pave way for hybrid taxi fleets

Kerry pushes law that would give cities authority 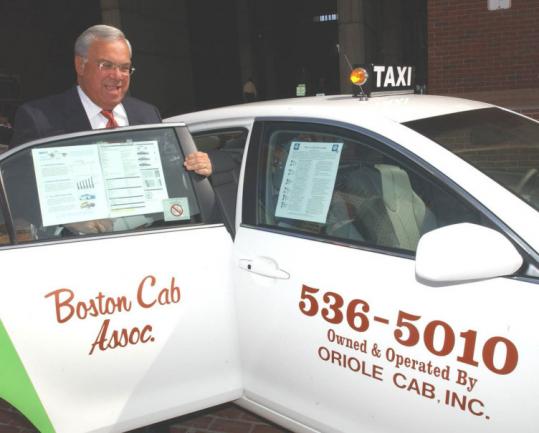 A bill before Congress would give local governments the authority to set fuel efficiency standards for taxicabs, allowing cities like Boston to overcome federal court rulings that struck down their ambitious efforts to require all taxis to be hybrids.

The Green Taxis Act of 2009, part of an overall climate change bill introduced Wednesday in part by Senator John F. Kerry, would amend existing federal laws so that cities such as Boston, New York, and Seattle, which have failed in previous attempts, could require taxis to be hybrid.

Federal courts have struck down those attempts, saying cities infringed on the Energy Policy and Conservation Act of 1975, which authorizes the federal government to establish fuel economy standards for vehicles and forbids local officials from setting their own standards.

States can petition federal regulators for exemptions from the law.

But the Green Taxis Act, an amendment to the federal Energy Policy and Conservation Act and the federal Clean Air Act, would allow cities and towns to decide on their own, based on their own needs and policies.

“This legislation will help empower cities and towns across the nation, including Boston, to improve air quality, lower carbon emissions, and save cab drivers and passengers money,’’ Kerry said in a prepared statement. “We know we must reinvent the way America uses energy and once again Boston is leading the way.’’

Mayor Thomas M. Menino was quick to endorse the bill, saying, “Hybrid taxis make sense for taxi drivers, for consumers, and for the health of all Bostonians.’’

The city had tried, in regulations passed in 2008, to require that all taxis be hybrids by 2015. The regulations would be phased in, with older taxis needing to be replaced immediately.

To justify the regulations, city officials cited an analysis of Boston’s taxi fleet showing that the typical 2-year-old Ford Crown Victoria taxi operates at an average of 10 miles per gallon while traveling 110,000 miles per year. In contrast, a new Camry Hybrid would be 70 percent more efficient, at 34 miles per gallon.

Boston officials said that only about 15 percent of the city’s 1,825 cabs are hybrids.

The proposal met stiff opposition, however.

Taxi drivers with the Boston Taxi Owners Association said the regulations were too costly to enact under the city’s timeline because they would be forced to buy new hybrid cars.

The drivers had called for looser regulations so that they could buy used hybrids or other cars more fuel efficient than the Crown Victorias.

But, he said, the taxi drivers’ proposal to use cars other than new hybrids would ease their financial hardship.

Merry said yesterday that the proposed bill would do nothing to address the taxi owners’ concerns.

He said cab drivers have unsuccessfully proposed compromises with city officials that would loosen the regulations.

“A second-hand hybrid would be just as effective in improving things,’’ he said.

“What we’re still looking for is a way to work with the city to develop a scheme so that people will not lose their livelihood.’’