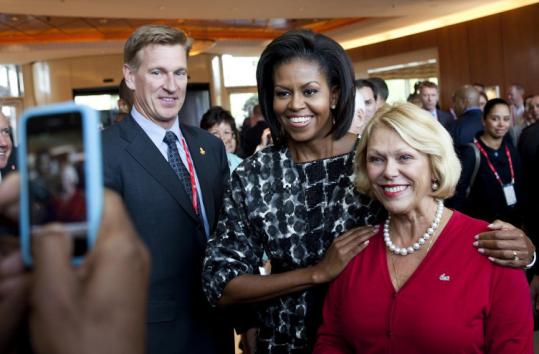 WASHINGTON - Seeking payback for a reprimand of one of their own for shouting “You lie!’’ at President Obama, House Republicans want a Democratic lawmaker to apologize or face a reprimand for saying the GOP wants Americans to “die quickly’’ if they get sick.

But Representative Alan Grayson of Florida stood firmly behind his comments and returned to the House floor yesterday afternoon to mock Republicans’ call for an apology.

“I would like to apologize . . . I apologize to the dead and their families that we haven’t voted sooner to end this Holocaust in America,’’ he said, citing a study being published in the American Journal of Public Health that found nearly 45,000 people die each year for lack of health insurance.

His remarks weren’t spontaneous. Grayson, a first-term Democrat known for being provocative, reinforced his point with signs saying the same thing.

Representative Tom Price of Georgia, who heads the conservative Republican Study Committee, drafted a “resolution of disapproval’’ that mirrors the one Democrats approved against Wilson, saying Grayson’s conduct was “a breach of decorum and degraded the integrity and proceedings of the House.’’

Ken Spain, spokesman for the House Republican campaign arm, said Democrats should be “lining up to call on him to apologize.’’

“House Speaker Nancy Pelosi now has an opportunity to condemn the very behavior and tone of this health care debate that she claims will ‘incite violence,’ ’’ he said, referring to Democratic concerns that the bitter tone of the debate could lead to attacks. -- ASSOCIATED PRESS

More overhaul of secrecy needed, advocates say
WASHINGTON - President Obama’s new standards for government openness have not trickled down to some agencies, where officials have used special statutes slipped into bills to skirt the Freedom of Information Act, advocates said yesterday.

Efforts to strengthen the 42-year-old law “have been hampered by the increasing use of legislative exemptions that are often sneaked into legislation without debate or public scrutiny,’’ Senate Judiciary Committee Chairman Patrick Leahy of Vermont said.

News organizations and media groups said new legislation was needed to limit the information agencies may keep secret and for how long. “We appreciate the change in policy direction, but the change hasn’t yet reached the street,’’ said Tom Curley, president and chief executive of the Associated Press.

The hearing was the first status report on the Office of Government Information Services, created by Congress this year at the National Archives and Records Administration to review compliance with open government laws, including new requirements to better track information requests and reduce processing delays. -- ASSOCIATED PRESS

Michelle Obama goes to bat for Chicago as Olympic city
COPENHAGEN - Having one-on-one VIP meetings, dining with dignitaries and stars, flattering Olympic officials by taking notice of the little things that count, Michele Obama wasted no time yesterday going to work for her hometown.

Her job: pitching Chicago for the 2016 Summer Olympics and making every minute count.

Leading the Chicago’s delegation and representing the president until he arrives tomorrow, Obama plans to meet with as many International Olympic Committee members as possible to try to persuade them to pick the city over Rio de Janeiro, Madrid, and Tokyo.

“She is one impressive lady,’’ said Kevan Gosper, a senior IOC member from Australia.

In a rousing speech to 300 Chicago supporters, she said the Olympics have the power to transform the lives of children in the city and around the country.

“We understand that sports save lives, that it makes dreams come true, that it creates visions in kids’ heads that they can be the next David Robinson, the next Barack Obama,’’ she said at a welcome dinner.

“If we can show people that we understand that power and that possibility, then they will have the confidence that not only will we have the Olympics in a city that works, but we’ll execute this thing with a kind of passion and openness and sincerity that the world so greatly wants to see in us. So let’s get it done.’’ -- ASSOCIATED PRESS