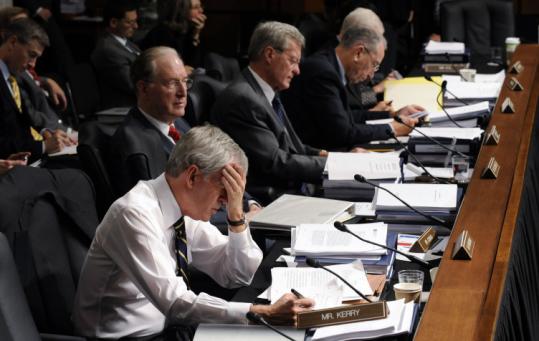 WASHINGTON - Bidding for support from Democrats as well as a single Republican, the chairman of the Senate Finance Committee opened a long-awaited debate over health care yesterday with fresh plans to reduce costs for working families and impose new obligations on the insurance industry.

“This is our opportunity to make history,’’ said Senator Max Baucus, who announced he was adding $50 billion to draft legislation to help those who would be required to purchase insurance.

After months of delay caused by ultimately unsuccessful bipartisan talks, most committee Republicans praised Baucus, a Montana Democrat, before launching into attacks on the legislation he advanced late last week.

Senator Jon Kyl, an Arizona Republican, called the measure a “stunning assault on our liberty’’ and cited a requirement for individuals and families to buy insurance. Senator Charles Grassley of Iowa, the senior Republican involved in the private negotiations, said the Senate Democratic leadership had imposed a mid-September deadline, “causing the end to our bipartisan work before it was done.’’ He called it an absurd move, “utterly and completely appalling.’’

The Republican Baucus has courted most assiduously, Senator Olympia Snowe of Maine, said noncommittally that the legislation was “a solid starting point - but we are far from the finish line.’’

The panel is the fifth and last of the congressional committees to review President Obama’s call for sweeping legislation to reduce the ranks of the uninsured, expand protections for those already covered, and curb growing medical costs.

Baucus has said he hopes the panel can complete work by the weekend, although more than 500 amendments were pending to the 10-year, nearly $900 billion bill.

The most significant change Baucus formally unveiled yesterday would sweeten the subsidies for individuals and families with incomes up to four times the government’s poverty level - $43,320 for individuals and $88,200 for a family of four. In addition, Baucus called for lower out-of-pocket medical costs for some families and recommended making it easier for those who cannot afford the coverage offered by employers to qualify for federal subsidies so they can purchase individual policies.

The revisions would significantly alter a proposed tax on high-cost insurance policies, a measure that has drawn particular opposition from organized labor and liberal Democrats. Baucus said he would exempt from the tax policies sold to “high risk’’ workers, such as firefighters. At the same time, he raised the level of the tax to recoup some of the revenue that would otherwise be lost.

Amid Republican ridicule that he wanted to tax Q-tips, Baucus backed down yesterday and exempted consumer items of $100 or less from a proposed tax on medical device manufacturers that would help pay for coverage for the uninsured.

But more expensive consumer medical goods, including power wheelchairs, insulin pumps, and hearing aids, would still get hit. The difference is those are paid mostly through insurance, so the full cost doesn’t come out of the household budget.

“He’s trying to avoid the perception that the middle class is going to be taxed,’’ said Dan Mendelson, president of Avalere Health, an information company that serves the health industry and government. “The trick is to get funding for the bill but not to have anything that smacks of a middle-class tax.’’

The medical device industry, which makes 80,000 different products including heart valves and imaging machines, says that eventually the taxes will get passed on to consumers. Republicans say that amounts to a violation of President Obama’s campaign pledge not to raise taxes on the middle class. Five GOP governors, including potential 2012 presidential candidate Tim Pawlenty of Minnesota, wrote Baucus yesterday urging him to drop the tax.