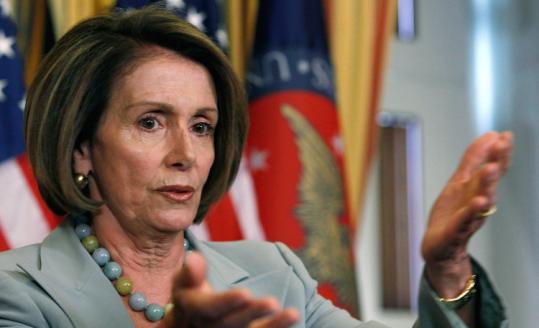 House Speaker Nancy Pelosi indicated that a request for more troops in Afghanistan will get a skeptical look. Pelosi said she expects to be briefed on the military situation next week. (Mark Wilson/Getty Images)
By Lara Jakes Associated Press / September 11, 2009

WASHINGTON - Democratic leaders in Congress urged the Obama administration yesterday to quickly produce a plan for winning the war in Afghanistan or risk widespread opposition within the president’s own party to a new troop build-up.

“I don’t think there’s a great deal of support for sending more troops to Afghanistan in the country or in the Congress,’’ said House Speaker Nancy Pelosi, the highest-ranking Democrat to signal that a push for more troops will get a skeptical look.

Democratic Representative John P. Murtha, chairman of the House Appropriations panel, which oversees military spending, described himself as “very nervous’’ about sending more troops to Afghanistan and cited limited funds to do so. Murtha, a Marine Corps veteran, said yesterday he might support a request if the Obama administration withdraws a significant number of the 130,000 US troops from Iraq in the very near future.

Senate majority leader Harry Reid of Nevada, however, cautioned fellow Democrats to withhold judgment until Obama decides what to do.

“Let’s just take it easy,’’ Reid said. “I don’t think we need 100 secretaries of state. I think we should wait and give the president an opportunity to see what he recommends, and then we can dissect that any way we want.’’

The tepid support reflects growing impatience among lawmakers to see an on-the-ground assessment of the military situation in Afghanistan that was delivered to the White House last week. That report, by Army General Stanley McChrystal, commander of US and NATO forces in Afghanistan, does not specifically ask for more troops, but a formal request is expected by the end of the month.

Perhaps more important, lawmakers said they wanted to hear how the Obama administration will measure the mission’s success or failure.

Pelosi said she did not expect to be briefed on the plans until next week at the earliest. Aides said they expected Admiral Mike Mullen, chairman of the Joint Chiefs of Staff, to brief senators Tuesday and House members Wednesday.

White House spokesman Robert Gibbs said yesterday that Obama was still waiting for McChrystal to formally ask for additional troops. This spring Obama ordered 21,000 more troops to Afghanistan, which would bring the total there to 68,000 by the end of the year.

“The president has always discussed, and particularly since coming to office, that there isn’t a military solution alone for Afghanistan,’’ Gibbs told reporters at the White House. “We do not have the troops or the money to be there in perpetuity. . . . We have very clear goals.’’

The Pentagon has yet to give Obama at least two military evaluations of the on-the-ground assessment. Those reports, by Mullen and US Central Command General David Petraeus, will be delivered this week, Pentagon spokesman Geoff Morrell said.

At the same time, the White House is in the process of compiling a list of about 50 benchmarks to judge whether the military mission is working. The list is due Sept. 24, and White House officials have said they are working with lawmakers in drawing it up, in part to corral congressional support as the troops’ death toll in Afghanistan grows.

Last month, 51 US troops died in Afghanistan, making August the bloodiest month for the United States since it invaded in 2001, weeks after the Sept. 11 terror attacks.

Pelosi said she was more interested in the benchmarks than McChrystal’s report.

In interviews this week, lawmakers said they wanted to see strong evidence that ordering more troops to the war-torn nation would dislodge insurgents from safe havens in Afghanistan and neighboring Pakistan.

Opposition so far appears stronger among House Democratic leaders than their Senate counterparts.

“We don’t have the financial resources to sustain one long deployment, let alone two,’’ Murtha said. “There’s so much consternation in Congress about additional troops, especially without a plan. It’s going to come to a head here.’’

But Ike Skelton, a Missouri Democrat who chairs the House Armed Services Committee, urged his colleagues to “give our forces the time and resources they need to show progress in the fight against the enemies responsible for the attacks of 9/11.’’