THIS STORY HAS BEEN FORMATTED FOR EASY PRINTING
news analysis

A floundering campaign on health care 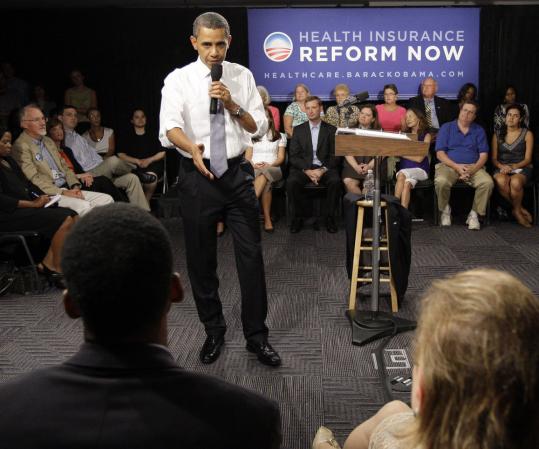 WASHINGTON - President Obama’s campaign for the White House was widely hailed for its ability to stick to a script. But as prospects for the passage of health care reform become murkier, and a backlash among liberal Democrats becomes louder, even some of Obama’s strongest supporters are suggesting that his discipline has slipped.

In recent weeks, Obama has delivered mixed messages that have bogged down the debate and sapped momentum from his top domestic priority.

He distracted attention during his own prime-time press conference last month on health care when he stated that Cambridge police acted “stupidly’’ when they arrested Henry Louis Gates Jr., which dominated the news for a week. He took several days to directly rebut charges that the health plan included “death panels’’ that would determine end-of-life care. This week, he and his top aides appeared to waver on the importance of creating a government-run plan to compete with private insurers.

Republicans, meanwhile, have stepped into the void of the August congressional recess and, in a page taken directly from Obama’s 2008 playbook, are using a combination of online organization and message-of-the-day discipline to frame the legislation as a government takeover.

Even though Republican leaders said they agreed with Obama that there are no “death panels’’ contained in the proposals in Congress, the allegation clearly had an impact. In an NBC News/Wall Street Journal poll released this week, 45 percent of those surveyed said it was likely that the federal government planned to decide when to stop providing medical care to the elderly. Also, 55 percent of respondents believed that the health care plan would insure illegal immigrants, and 54 percent believed the plan would lead to a “complete’’ government takeover. Obama has refuted both notions.

Obama’s presidential campaign was lauded by political analysts for its groundbreaking use of Internet organizing, text messaging, neighborhood “meet-ups,’’ and many other tools that helped increase support for the candidate. It was buttressed by a disciplined candidate who projected calm and stayed on message, while the Republican candidate, Senator John McCain, was viewed by some as having difficulty portraying a consistent theme on the economy.

Now, as he struggles with the messy business of governing, some are hoping for a return of Obama’s campaign-style focus.

Howard Dean, the former Democratic National Committee chairman who has been critical of the White House’s equivocation about support for the public-option plan, said the White House is going through a catharsis as it tries to figure out how to transfer campaign tactics to winning one of the most difficult legislative battles in recent history.

“It is a learning experience, a major initiative like this in the first year,’’ Dean said in an interview. “It is a different kind of campaign and that’s why they had trouble with the message. I don’t think they were prepared for the vociferousness of the attack.’’

Jon Cowan, president of a moderate think tank, Third Way, said that Obama’s campaign shouldn’t be remembered as perfect, but instead was notable for being able to realize missteps and quickly recalibrate. “When things got off track, the campaign was brilliant in looking at how things got off track and how to get back on track,’’ he said.

He said the same thing is now happening with the health care battle, evidenced by Obama’s effort to emphasize the importance of reform even to those who already have insurance. Obama has said the insured would be protected from losing coverage and exorbitant out-of-pocket expenses.

Still, some of Obama’s efforts to replicate the campaign have been halting. Yesterday, in a last push before leaving today for vacation, he returned to a campaign favorite by speaking with conservative talk-radio host Michael Smerconish, who had endorsed his presidential campaign. During the show broadcast from the White House, a caller said that many people did not understand his proposals.

Another caller told the president that “it’s very frustrating to watch you try and compromise with a lot of these people who aren’t willing to compromise with you.’’ Obama said he understood the “hand wringing,’’ but vowed: “I guarantee you, Joe, we are going to get health care reform done. . . . Passing a big bill like this is always messy.’’

Later yesterday, Obama appeared in an online forum with Organizing for America, his postelection grass-roots group. He told supporters that he was facing similar hurdles in his health care push as in his once-longshot campaign, and criticized Republican leaders for opposing him on health care for political advantage. But he optimistically declared, “Nothing’s more powerful than millions of voices calling for change.’’

But the question is whether the effort is coming too late.

“One of the big surprises is that a campaign that was able to activate its grass-roots constituency through the Internet and then activate and send them into the streets to meet their neighbors to persuade them to vote for Obama has not been successful in mobilizing individuals in this health insurance effort,’’ said Kathleen Hall Jamieson, a specialist on political communication and director of the Annenberg Public Policy Center at the University of Pennsylvania.

There is a crucial difference between the campaign and the health care battle that seems to have stymied the White House - and it is one that Obama himself has analyzed.

During the campaign, Obama marveled at the way many supporters viewed him as a clean slate onto which they could write their hopes and dreams. Obama talked in generalities about health care reform during the campaign and, for instance, barely mentioned the idea of a public-option plan. Now, as specifics about the plan replace campaign platitudes, it is inevitable that a certain number of supporters will be disappointed by the details, Jamieson said.

That has given Republicans an opening to go after elements of the plan while still saying they support an overhaul. “There is a big difference between health care reform, which everybody is for, and a bill that raises taxes and cuts Medicare and increases government involvement in your health care,’’ said Don Stewart, a spokesman for the Republican leader of the US Senate, Mitch McConnell of Kentucky. “Once you get into specifics, you are going to lose people.’’

Obama has said he wants to raise taxes on the wealthiest Americans in order to pay for more coverage, and he prefers the public-option plan, but he has said his proposed cuts in Medicare are intended to reduce waste and would not result in fewer benefits.

Paul Begala, who was an adviser to President Clinton during the failed 1993 effort to overhaul health care, suggested that Obama should return to the campaign mode of explaining why the current system is bad and spend less time on the nuances of the various plans.

“This is heretical, but I would explain less,’’ Begala said. “When you get into the minute details of a 1,000-page bill, you lose people in the weeds.’’