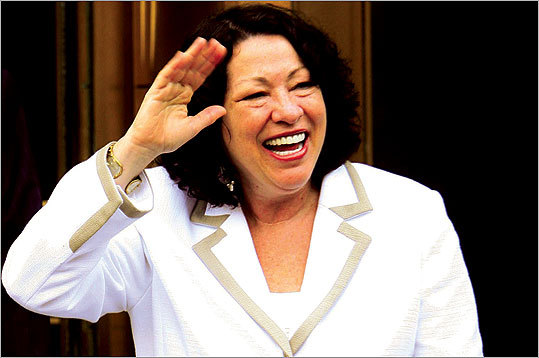 Federal Appeals Judge Sonia Sotomayor left a Manhattan courthouse yesterday after the US Senate approved her nomination to the Supreme Court on a largely party-line vote. Sotomayor, who will be sworn in tomorrow to replace the retiring David Souter, will become the first Hispanic justice in the court's history and the third female. (Mary Altaffer/Associated Press)
By Susan Milligan Globe Staff / August 7, 2009

WASHINGTON - Hopes for a bipartisan approach to solving the nation’s ills, a goal President Obama made a core element of his “change’’ election campaign pitch, have virtually evaporated as party-line feuding and harsh exchanges between political leaders overshadow their earlier efforts to work together.

The Supreme Court confirmation of Judge Sonia Sotomayor yesterday garnered just nine GOP votes in the Senate. Several Republicans lauded Sotomayor’s personal history but voted against her anyway, citing past Democratic treatment of GOP nominees to the court, a clear sign that partisan payback is alive and well.

The proposed expansion of healthcare coverage to all Americans - an ambitious undertaking that Democrats desperately hoped would win bipartisan backing - is evolving with little GOP support. Obama and Democratic Senate leaders in recent days have raised the possibility of trying to pass a healthcare overhaul without reaching across the aisle, using a parliamentary maneuver to prevent Republicans from blocking the bill with a filibuster.

And while Republicans were wary earlier this year of personally criticizing the popular president, they have been emboldened by Obama’s drop in public opinion polls, slamming the “Obamacare’’ package that has been crafted largely on the Hill and not in the White House.

“The idea that Washington is ever going to be anything other than a partisan town doesn’t really float,’’ said Lee Miringoff, director of the nonpartisan Marist Institute for Public Affairs in Poughkeepsie, N.Y. While the majority Democrats see a rare opportunity to push through game-changing legislation, “the Republicans aren’t going to roll over and join this crusade,’’ he said.

Obama ran on a theme to “change the culture’’ of Washington, and initially, his outreach appeared to soothe long-simmering tensions on Capitol Hill. Lawmakers in both parties responded to Obama’s nonconfrontational tone.

Even conservative Representative Louis Goehmert of Texas remarked on the respectful treatment he received from White House chief of staff Rahm Emanuel when Goehmert called with a policy suggestion. The president hosted a bipartisan cocktail party at the White House.

But the landscape has changed dramatically for Obama after his first half-year in office, with his efforts to reach out to Republicans having diminishing returns.

A recent pattern of partisan warfare over Supreme Court nominees continued yesterday. Obama’s opponent in the presidential campaign, Arizona Republican John McCain, who has cultivated an image as a moderate and frequently broke from former president George W. Bush, joined most of his party in the Senate yesterday and voted against Sotomayor. So did Senator Orrin Hatch of Utah, even though he voted in favor of Sotomayor for her US Court of Appeals position in 1998.

Republicans have launched a full-on assault on the healthcare bill, with Senator Jim DeMint, Republican of South Carolina, personalizing the issue by calling it Obama’s “Waterloo.’’ House Minority Leader John Boehner, Republican of Ohio, released a Web video ridiculing the healthcare plan and targeting Obama as the driving force behind it.

Senate Majority Leader Harry Reid, Democrat of Nevada, shot back yesterday, accusing the GOP of being taken over by talk-radio personalities that he said are encouraging conservatives to disrupt Democratic congressmen’s town meetings on healthcare.

Asked directly yesterday whether the president was losing patience with the quest for bipartisanship, White House press secretary Robert Gibbs said no. But Gibbs indicated that Obama would not wait much longer before giving up on a strong bipartisan healthcare bill.

A few Senate Democrats have already alluded to the option of attaching at least some of the healthcare package to a budget bill - a parliamentary maneuver that would mean just a simple majority of senators would be required to approve it.

Republicans chafe at the idea of attaching healthcare to a bill that cannot be filibustered.

“I think the health bill will be the ultimate test,’’ said Senator Judd Gregg, Republican of New Hampshire.

“If it’s a bipartisan bill, then we can argue [Obama is] governing from middle as a post-partisan president.’’

Representative Edward Markey, a veteran Malden Democrat heavily involved in both the climate change and healthcare bills in the House, said Democrats want the GOP on board, but will not let the opposing party stand in the way of passing Obama’s agenda.

“These are historic bills. They have to be completed,’’ Markey said in an interview.

“We want to do it on a bipartisan basis, but we will move forward to accomplish the goal with or without the support of those who are obstinately opposed to change.’’

John Pitney, a former House GOP staffer who is now a professor at Claremont McKenna College in Claremont, Calif., said Obama, like previous presidents, is limited in his ability to bring long-battling members of Congress together.

Obama was “initially seen as a different kind of figure’’ in Washington, Pitney said. “But reality has bought him back to earth. He’s mortal. Like other presidents, his numbers have come down, and when numbers come down, the political attacks begin.’’