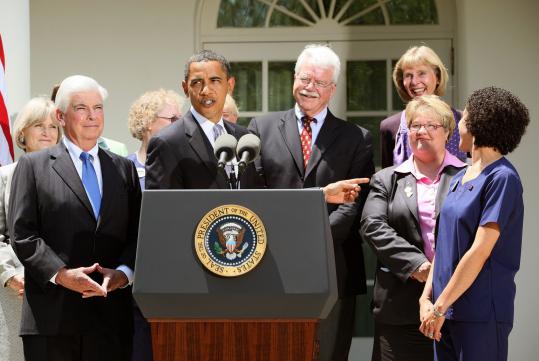 WASHINGTON - President Obama’s healthcare overhaul cleared its first hurdle in Congress on a partisan vote yesterday as he pressed lawmakers to “buck up’’ and pass legislation this summer and met with Republicans in search of an elusive bipartisan compromise.

Like House Democrats’ bill unveiled Tuesday, the $615 billion measure approved by the Senate health committee would require individuals to get health insurance and would provide financial assistance to poorer individuals and families.

Like the House bill, the Senate plan would require employers to offer coverage to their workers or pay a fee to the government instead. And like the House bill, the Senate committee’s bill would create a new government insurance plan to compete with private insurers and impose tough new rules on insurance companies to prevent them from denying coverage because of a person’s medical history.

The Senate Finance Committee is still working on its bill, which is to be combined with the health panel’s version for a floor vote in the full Senate. Finance Chairman Max Baucus met yesterday with committee Democrats to try to settle how to pay for the bill and other issues. Finance Committee members are considering a proposal that would raise $100 billion over 10 years by imposing new fees on health insurance companies, a new source of potential financing for a $1 trillion package that’s short on funds.

But the 13-to-10 party-line tally in the health committee signaled a deepening rift in Congress. Senator Chris Dodd, a Connecticut Democrat, said he regretted that no Republicans voted for the bill, but that it was more important to get good legislation than to get GOP votes.

“We have delivered on the promise of real change,’’ a reference both to the bill and Obama’s campaign promise, said Dodd, who stood in as chairman for Senator Edward M. Kennedy of Massachusetts, who is being treated for brain cancer.

Kennedy called for bipartisanship, saying universal healthcare “is a cause that can and should unite us all as Americans.’’ “As we move from our committee room to the Senate floor, we must continue the search for solutions that unite us, so that the great promise of quality affordable healthcare for all can be fulfilled,’’ he said in a statement.

The president, in a Rose Garden appearance with nurses, also gave a nod to the goal of bipartisanship. But he left no doubt that he wants action - and quickly. In the House, Democrats began pushing their legislation through the first of three committees, although moderate and conservative members of the rank and file were demanding changes.

This week’s congressional action “should make us hopeful - but it can’t make us complacent,’’ said Obama, who also conducted a number of network television interviews to push his message. “It should instead provide the urgency for both the House and the Senate to finish their critical work on health reform before the August recess.’’

Obama wants legislation on his desk this fall that would cover the nearly 50 million uninsured Americans while trying to slow the rate of increase in healthcare costs. He supports a government-run insurance plan to compete with private insurers, but he says he doesn’t want to overturn the system of employer-sponsored health benefits that has served middle-class families for better than half a century. He wants the legislation to be fully paid for and the total cost kept around $1 trillion over 10 years.

But a senior Republican whom Obama courted only a few months ago to become his commerce secretary sounded alarm bells. “This supposed healthcare fix is a healthcare failure and a disaster for the American people,’’ said Senator Judd Gregg, a New Hampshire Republican. “We still have time to turn this process around instead of steamrolling our country into a sub-par government-run plan, but it will require serious action from Democrats and Republicans and a pledge to put politics aside.’’

The debate is taking on the flavor of a campaign. In the crosshairs are moderate senators, Democrats and Republicans, whose votes could provide the edge in a divided Senate.