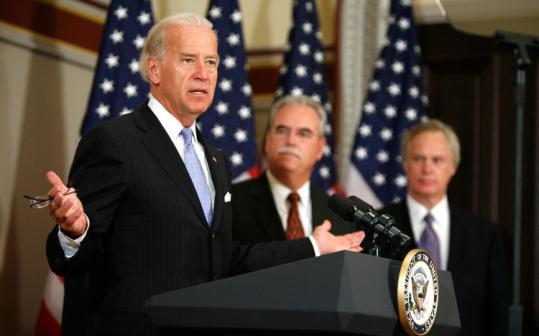 WASHINGTON - The race in Congress to pass bipartisan healthcare legislation this summer hit a rough spot yesterday as key senators raised doubts about whether they could sort out complex policy disagreements in time.

Republicans called on Democrats to slow the pace of deliberations, and Democratic leaders sounded decidedly less confident about speedy approval amid festering divisions. Members of the Senate Finance Committee, which is searching for a bipartisan compromise, acknowledged they were not close to a deal.

Last spring Democratic leaders set an aggressive timetable for passage of universal healthcare coverage, agreeing to vote before the Aug. 8 recess, return in September to work out the differences between House and Senate versions, and send a bill to the president before the end of the year. The schedule reflected a widespread belief among Democrats that they must move quickly to take advantage of the popular new president’s political momentum, and to avoid the political distraction of the midterm elections in 2010.

But in recent weeks progress has slowed dramatically. Moderate Democrats and Republicans are balking at the idea of creating a government insurance option, which more liberal Democrats insist is crucial if insurance will be affordable. Many Democrats also are resisting the idea of taxing a portion of health benefits for employees with the most generous insurance plans.

Moderates in both parties are also worried about the costs of expanded healthcare coverage - it is likely to exceed $1 trillion - at a time when deficits are soaring and the economy is weak.

Pressed by reporters yesterday on whether the Senate could pass a bill by August, the Senate Finance Committee chairman, Max Baucus, sounded less certain than he had a month or so ago. “I hope,’’ he said. “It’s a goal. We’ll see.’’

“I don’t see any way it can make it to the floor by the August recess,’’ said Senator Judd Gregg of New Hampshire, the ranking Republican on the Budget Committee, citing delays in producing a bill and this month’s Supreme Court confirmation hearings for Sonia Sotomayor. “So the calendar doesn’t work.’’

Meanwhile the Congressional Budget Office, a critical nonpartisan authority that tallies up the cost of legislation, is swamped with the job of analyzing competing healthcare proposals.

“I think they’re trying to put together one-sixth of the American economy in too short a period of time,’’ said Senator Orrin Hatch, a Utah Republican and Finance Committee member.

The Obama administration and Democratic leaders have pursued their legislative agenda at hyper speed this year, eager to get their proposals passed and signed into law while voters are still eager for sweeping change. In just the last six months, Democrats have pushed through a children’s health bill, an equal pay law, and a credit cardholders’ bill of rights.

Late last month, House Speaker Nancy Pelosi, a California Democrat, pushed through a climate change bill that would impose historic new limits on pollutants tied to global warming. While Pelosi did not have the votes in hand even a few hours before the pre-Independence Day recess vote, she and the White House conducted an 11th-hour lobbying blitz and won its passage.

Democrats are approaching the healthcare overhaul with a similar sense of urgency. Yesterday the Obama administration announced a significant agreement Baucus reached with hospital groups to reduce Medicare and Medicaid payments by $155 billion over 10 years, savings that will help pay for the health overhaul.

“Reform is coming,’’ said Vice President Joseph Biden, who announced the deal while Obama was at the G-8 summit in Italy. “It is on track. It is coming.’’

But it is not clear whether lawmakers will be able to move as quickly on an issue that is at least as complex and much more politically sensitive.

“It doesn’t become any easier because someone’s put a deadline out there,’’ said Senator Ben Nelson, a Nebraska Democrat.

But stretching out the schedule may risk the votes of fence-sitting lawmakers if they lose their nerve over the August recess, when interest groups are poised to run millions of dollars worth of TV ads and organize ground campaigns on an unprecedented scale.

Further, two key Democratic senators, Edward M. Kennedy of Massachusetts and Robert Byrd of West Virginia, are seriously ill, and leaders want to schedule key votes when the two legendary lawmakers are well enough to show up for session.

But even if they do, Democratic leaders may ultimately need GOP votes to pass the package. While the swearing-in of Senator Al Franken of Minnesota this week brought the Democratic caucus count to 60 - the number needed to prevent the minority party from blocking passage - not all Democrats are necessarily on board.

Hatch said that in a 90-minute meeting with Republicans working on healthcare issues yesterday, Senate majority leader Harry Reid insisted he had not ordered Baucus against making concessions to moderates, as the website Politico reported yesterday.

Baucus also insisted that nothing like that had happened.

“No, no, no,’’ he told reporters, adding that the negotiations were “still very bipartisan,’’ and that a vote before August remained the goal.

“If you had told me [we] were going to go through the health reform debate in July without any dips in the roller coaster, I’d ask you what hallucinogenic substances you were smoking,’’ said Senator Ron Wyden, and Oregon Democrat and a member of the Finance Committee.

But despite the threat of a delay, he said, “I do not see this as a meltdown for the cause of bipartisan health reform.’’