Healthcare firms load up on lobbyists 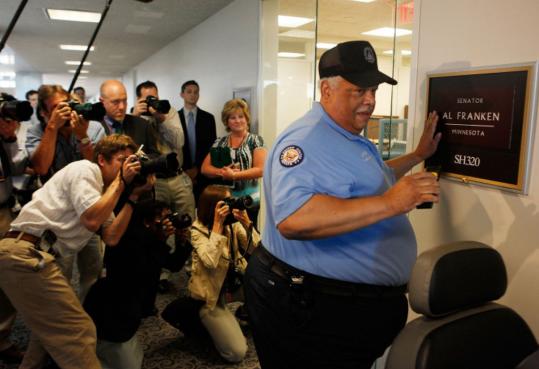 A workman installed the name plate yesterday for Democrat Al Franken of Minnesota, who is to be sworn in today as the junior senator. "I am ready to get to work," Franken said. (Mark Wilson/ Getty Images)
Associated Press / July 7, 2009
Text size – +

WASHINGTON - The nation’s largest insurers, hospitals, and medical groups have hired more than 350 former government staff members and retired members of Congress in hopes of influencing their old bosses and colleagues, according to an analysis of lobbying disclosures and other records.

The tactic is so widespread that three of every four major healthcare firms have at least one former insider on their lobbying payrolls, according to The Washington Post’s analysis.

Nearly half of the insiders previously worked for the key committees and lawmakers, including Senators Max Baucus, a Montana Democrat, and Charles Grassley, an Iowa Republican, that are debating whether to adopt a public insurance option opposed by major industry groups. At least 10 others have been members of Congress, such as former House majority leaders Richard Armey, a Texas Republican, and Richard Gephardt, a Missouri Democrat, both of whom represent a New Jersey pharmaceutical firm.

The hirings are part of a record-breaking influence campaign by the healthcare industry, which is spending more than $1.4 million a day on lobbying in the current fight, according to disclosure records. Overall, healthcare companies and their representatives spent more than $126 million on lobbying in the first quarter, leading all other industries, according to Senate data and the Center for Responsive Politics.

The television ad wars are also beginning and expected to grow this summer.

Through June 27, $31 million was spent for roughly 47,000 TV ads on healthcare this year, said Evan Tracey, president of the Campaign Media Analysis Group, a firm that tracks issue advertising. That’s double the roughly $14 million the insurance industry spent in 1993 and 1994 for the famous “Harry and Louise’’ ads credited with helping kill President Clinton’s healthcare drive, but a fraction of the $250 million Tracey guesses will ultimately be spent this year.

So far about $15 million has been spent on ads favoring the Democrats’ push to revamp healthcare, and $4 million to oppose it. Another $12 million has gone to ads generally favoring better healthcare - nearly all of that was spent by the Pharmaceutical Research and Manufacturers of America, representing drug makers, which hopes its market will expand.

White House and hospitals reported near deal on costs
WASHINGTON - The Obama administration and major hospital associations were nearing a deal late yesterday for about $150 billion in cost savings to help pay for an overhaul of the nation’s healthcare system, with an announcement expected at the White House as early as tomorrow, officials said.

If an agreement is reached, it would be the latest step in a continuing effort by the White House to win concessions from major health industry groups to help pay for legislation to provide health insurance to all Americans. Democrats are hoping to keep the cost of the overhaul at about $1 trillion over 10 years.

Lawmakers, industry groups, and other officials involved in the negotiations over hospital costs would not immediately provide details of any agreement.

“Discussions are ongoing,’’ said Jennifer Armstrong Gay, a spokeswoman for the American Hospital Association, one of the groups involved in the talks. “We are continuing to meet with Congress and the White House.’’

Senator Max Baucus, Democrat of Montana and chairman of the Finance Committee, who is leading efforts to draft a bipartisan healthcare bill, would not discuss specifics about the potential deal with hospital organizations.

Baucus said he remains confident that Senate Democrats can bring a healthcare bill to the floor before the summer recess begins Aug. 8.

Funny guy Franken skips the jokes on day 1 in D.C.
WASHINGTON - So, did you hear the one about the comedian who spent a whole day on Capitol Hill and told no jokes?

Democrat Al Franken arrived yesterday on Capitol Hill content to be as mundane in the Senate as he was brazen in his previous job as a “Saturday Night Live’’ performer.

After he showed up in a Senate hallway, Franken made clear his new schtick is serious senator from Minnesota, the once-funny funny man.

Franken is expected to be sworn in today as the junior senator from Minnesota, alongside fellow Democrat Amy Klobuchar.