President seeks ways to save jobs 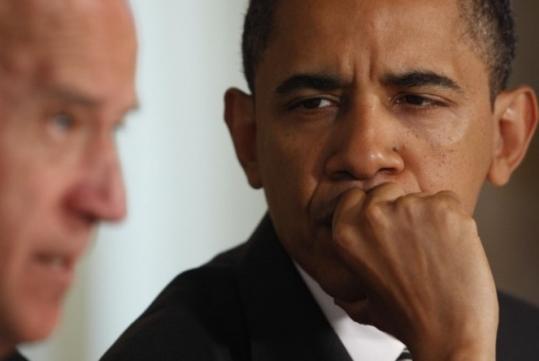 WASHINGTON - The Bunker Hill monument will get repairs, the town of Sutton will get a new $1.4 million wastewater system, and 36 health clinics statewide will expand care - all by the end of summer - under a plan President Obama outlined yesterday to accelerate spending of the $787 billion economic stimulus package. His goal: create or save 600,000 jobs in the next three months.

The president, returning from his second major foreign trip, tried to reassure Americans that the stimulus plan is on track - even though the 150,000 jobs the White House says it created or saved since he signed the bill in February was far outpaced by 1.6 million job losses over the same period.

Saying he's not satisfied with the progress, Obama delivered a set of marching orders to his Cabinet: cut red tape and ramp up hundreds of public works and other projects designed to stabilize the economy and reduce unemployment.

In Massachusetts, the proposal would spend federal money more quickly on projects, including more than $15 million in highway work from Bourne to the Berkshires, and taxiway repairs at Hanscom Field in Bedford, Beverly Municipal Airport, and Orange Municipal Airport. Also, the brick walls at the historic Charlestown Navy Yard will be repaired, and the state will get to spend $25 million for youth summer jobs, including about 800 in Boston.

Speaking to reporters before the Cabinet meeting, Obama noted that the 345,000 jobs lost in May made up the lowest total since September, asserting that "it's a sign that we're moving in the right direction."

Since taking office five months ago, his administration has "done more than ever, faster than ever, more responsibly than ever, to get the gears of the economy moving again," Obama said. "We've got more work to do."

The first 100 days of the stimulus - when about $44 billion not going to tax cuts was spent - established the foundation for job growth, and "now we're in a position to really accelerate," Obama said.

While his overall job approval ratings remain high, disapproval of Obama's handling of the economy has risen from 30 percent in February to 42 percent in late May, according to a Gallup poll.

Yesterday's White House announcement repackaged and reemphasized its goal of 600,000 jobs created or saved during the second 100 days of the stimulus. It includes 125,000 temporary summer youth jobs, and is an estimate based on economic projections, not a count of jobs.

House Republicans, not a single one of whom voted for the package, immediately highlighted the number of temporary jobs, and raised more questions about how much return on investment taxpayers are getting - and how much money is being wasted.

"Today's announcement is an acknowledgement that the Democrats' trillion-dollar stimulus is not working, and the American people know it," Representative John Boehner, the top House Republican, said in a statement. Though Democrats promised quick results, he added, "nearly four months later, unemployment has continued to climb and none of their rosy predictions have come true."

Eric Cantor of Virginia, the number two House Republican, said that Obama's plan "looks dramatically out of touch as they highlight the creation of temporary summer employment in the face of job losses unseen in decades, record unemployment and massive deficits."

The White House is racing against the clock: the next jobs report comes out July 2 and most economists expect the nation's unemployment rate - 9.4 percent last month and already the highest in 25 years - to move into double digits, passing a psychologically damaging barrier.

Jared Bernstein, Vice President Joseph Biden's chief economist, admitted yesterday that the administration, which had projected the unemployment rate would be about 8 percent in May, "was clearly too optimistic" about the depth of the recession. However, he stood by estimates that by the end of next year, the stimulus will create or save 3.5 million jobs and lower the unemployment rate by 1.5 to 2 percentage points.

Some economists and political analysts said the White House is still being too optimistic. They said Obama's announcement was an attempt to get ahead of an economic reality: most stimulus plans take time, and the jobless rate will probably get worse even as the economy shows signs of recovery.

Raymond Hill, an Emory University finance professor and a former Wall Street investment banker, said while "President Obama is doing the right thing" to have the stimulus money spent faster to stanch rising unemployment and promote consumer optimism, bidding procedures and antifraud rules that accompany major government spending will slow down the stimulus impact. Much of the spending won't happen until after the economy begins to rebound, which most specialists predict will happen next year, he added.

Bruce Buchanan, a University of Texas political science professor, said Obama is trying to "head off criticism by the Republicans."

The White House "has to be perceived as moving, and show that the money is being spent and the president is moving to energize the process," Buchanan said.