Tries to engage key allies in efforts to stabilize nation 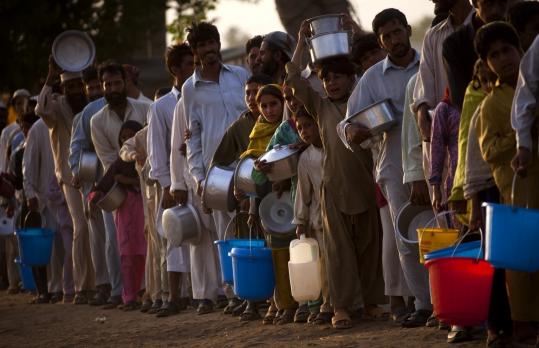 WASHINGTON - The Obama administration has appealed to China to provide training and even military equipment to help Pakistan counter a growing militant threat, US officials said.

The proposal is part of a broad US push to enlist key allies of Pakistan in an effort to stabilize the country. The United States is seeking to persuade Pakistan to step up its efforts against militants, while supporting the fragile civilian government and its tottering economy.

Richard C. Holbrooke, the administration's special representative for Pakistan and Afghanistan, has visited China and Saudi Arabia, another key ally, in recent weeks as part of the effort.

The American appeal to China underscores that country's importance in security issues. The United States considers China to be the most influential country for dealing with militaristic North Korea. China also plays a crucial role in the international effort to pressure Iran over its nuclear ambitions.

China traditionally has been reluctant to intervene in other countries' affairs. Chinese officials are concerned, however, about the militant threat to its west, fearing it could destabilize the region and threaten China's growing economic presence in Pakistan.

A senior US official, while acknowledging China's hesitation to become more deeply involved, said, "You can see that they're thinking about it." He spoke on the condition of anonymity because of the diplomatic sensitivity of the subject.

US officials believe China is skilled at counterinsurgency, a holdover of the knowledge gained during the country's lengthy civil war that ended with a Communist victory in 1949. And with China's strong military ties to Pakistan, US officials hope Beijing could help craft a more sophisticated strategy than Pakistan's current heavy-handed approach.

The Pakistani military has used artillery and aircraft against Taliban extremists in the Swat Valley and surrounding areas in its ongoing offensive. "They're very focused on hardware," the senior US official said of the Pakistanis. But the fighting has forced more than 2 million civilians to flee, United Nations officials estimate, threatening a humanitarian crisis.

The tide of displaced people could set off a backlash against the antimilitant effort among ordinary Pakistanis, many of whom already see the fight as driven by American, rather than Pakistani, interests.

China's strategic alliance with Pakistan reaches back to the 1960s. China has sold Pakistan billions of dollars worth of military equipment, including missiles, warships, and tanks.

China also maintains a huge economic presence in Pakistan. China's ambassador, Luo Zhaohui, said in a speech earlier this month that 10,000 Chinese engineers and technicians work in the country.

But China is increasingly concerned about the Pakistani insurgency, in part because Muslim separatists from the northwestern Chinese region inhabited by Uighurs have trained in Pakistani camps.

Officials in Beijing are also concerned because of recurrent kidnappings and killings of Chinese workers in Pakistan. China repeatedly has pressed the Pakistani government to protect its citizens better.

Analysts say the Pakistani government launched an attack on militants controlling Red Mosque in Islamabad in 2007 in part because of pressure from China for the release of its workers, who had been kidnapped by militants. More than 100 people died in the assault, and Islamic militants say it represented a turning point in their struggle against the government.

Pakistani officials in Washington acknowledged a lengthy alliance with China.

"Pakistan and China have a time-tested bilateral relationship, and Chinese support and cooperation have been crucial for Pakistan at many difficult times in our history," said Husain Haqqani, Pakistan's ambassador to the United States. "At this moment, too, we continue to look to China as a trusted friend and partner while laying the foundations of a more enduring strategic relationship with the US."

Chinese officials did not immediately respond to requests for comment.