Some question usefulness of promise 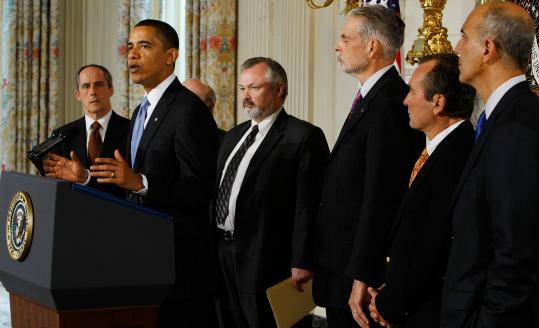 WASHINGTON - President Obama praised the healthcare industry's promise to cut $2 trillion in costs over 10 years, but lawmakers and economists questioned how much it really helps in coming up with a solution for the millions of uninsured.

It's "a watershed event in the long and elusive quest for healthcare reform," Obama declared yesterday at the White House with representatives of the insurance industry, doctors, hospitals, pharmaceutical companies, and a top labor union at his side.

It was a noteworthy sight as leaders of the industry who have killed past attempts at overhauling healthcare stood behind the president with a proposal to curb their costs.

"This is an extraordinary moment of opportunity for real reform in healthcare," said Senator Edward M. Kennedy of Massachusetts, who is helping lead the healthcare effort in Congress.

The proposal, however, was short on specifics. And it appeared to do little to shift positions in Congress as lawmakers attempt to write legislation to implement Obama's goal of extending healthcare to some 50 million uninsured Americans.

Several lawmakers made clear that the industry proposal would do nothing to stave off the outcome health insurers and others are trying to avoid - a new government insurance plan that would be available to middle-income Americans. Health insurers say such a plan would drive them out of business.

"This commitment to cost-cutting is a good-faith gesture by the healthcare industry, but it does not mitigate the need for a public plan option in the upcoming reform bill," said Senator Charles Schumer, a member of the Senate Finance Committee that's writing a health reform bill.

The industry groups said they would slow the growth of healthcare costs by 1.5 percent a year by coordinating care, reducing administrative costs, and focusing on quality, efficiency, and standardization. Healthcare costs would still grow faster than the economy as a whole, but not as fast as they otherwise would.

And slowing the increases doesn't translate directly to paying the estimated $1.5 trillion cost of covering the uninsured. Money saved by the private sector doesn't flow directly to the federal treasury.

The top Republican on the Senate Finance Committee, Chuck Grassley of Iowa, called the announcement a "move in the right direction," but said it would be more significant if the Congressional Budget Office, Washington's arbiter of what costs or saves money for the government, determined it saved money.

Many economists, however, say true spending reductions will require much more than nips and tucks.

"Everybody is going to have to make less money if we're really going to rein in costs," said Jean Mitchell, a Georgetown University health economist.

Significant changes in the way hospitals and doctors are paid also may be necessary, said Dr. Mark McClellan, an economist who ran Medicare and the Food and Drug Administration for President George W. Bush.

He noted, for instance, that past attempts to restrain Medicare payments haven't worked in part because they force doctors to cycle more patients through their office to make up for the declining revenue. He said a system that ties payment more to quality, rather than quantity, must be developed.

Harvard economist David Cutler said trillions of dollars in savings are possible over the next couple of decades. Medical mistakes - which can range widely from infections developed in hospitals to improper prescriptions - can cost as much as $100 billion a year. A lack of preventive medicine and poor care coordination also can drive up costs by leading to patients who need more extensive care.

"This is not rationing," he said. "This is just kind of, 'Stop doing things that are stupid.' "