At Holocaust remembrance, Obama warns against the dangers of silence 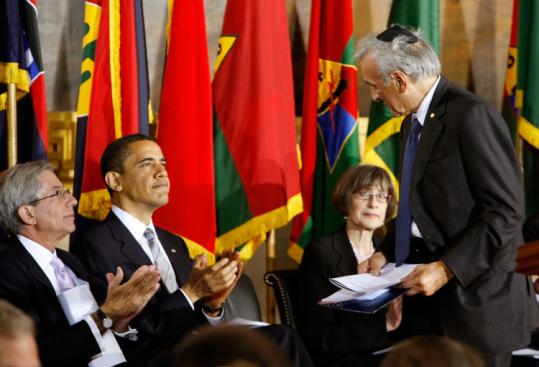 Obama warned against what he called the dangers of silence, saying that every day, somewhere in the world people must resist the urge to turn away from scenes of horror, hate, injustice, and intolerance.

All people, he said, must "fight the impulse to turn the channel" from distressing TV images of suffering, the sort of inhumanity known not only in the time of Nazi Germany, but more recently in Rwanda and Darfur.

Obama declared that people cannot wrap themselves "in the false comfort that others' sufferings are not our own." The president also called for people to "make a habit of empathy, to recognize ourselves in each other."

The risk of genocide has not been eliminated since about 6 million Jews were systematically murdered by Nazi Germany and its collaborators during World War II, he said.

"We've seen it, in this century, in the mass graves and the ashes of villages burned to the ground and children used as soldiers and rape used as a weapon of war," Obama said.

Without naming names, he noted that some still deny the Holocaust. At the same time, Obama said that apathy in the face of such a mind-set must be fought at all times.

Iranian President Mahmoud Ahmadinejad recently caused a stir at a UN conference by accusing Israel of being a racist nation. Earlier in yesterday's ceremony, Holocaust survivor and Nobel laureate Elie Wiesel noted his disgust with Ahmadinejad's comments and thanked the Obama administration for boycotting the UN conference.

Obama said part of the responsibility for the Holocaust rests with people who "accepted the assigned role of bystander."

He paid tribute to those who risked their own safety to help those targeted by the Nazis escape, including five rescuers from Poland who participated in a candle lighting ceremony.

"They remind us that no one is born a savior or a murderer," he said. "They teach us that no one can make us into bystanders without our consent, and that we are never truly alone."

He also cited stories of hope, in places where vicious conflict has given way to forgiveness.

"Our fellow citizens of the world, showing us how to make the journey from oppression to survival, from witness to resistance, and ultimately to reconciliation," Obama noted.

The annual Holocaust Day of Remembrance event is organized by the United States Holocaust Memorial Museum.