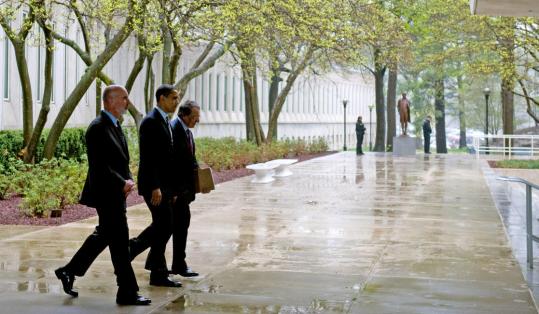 WASHINGTON - Pressure mounted on President Obama yesterday for a more thorough investigation into harsh interrogations of terrorism suspects under the Bush administration, even as he tried to reassure the CIA that it would not be blamed for following legal advice.

Obama said it was time to admit "mistakes" and "move forward." But there were signs that he might not be able to avoid a protracted inquiry into the use of interrogation techniques that the president's top aides and many critics say crossed the line into torture. And while Obama vowed not to prosecute CIA officers for acting on legal advice, aides yesterday did not rule out legal sanctions for the Bush lawyers who developed the legal basis for the use of the techniques.

The president's decision last week to release secret memorandums detailing the harsh tactics employed by the CIA under his predecessor provoked a furor that continued to grow yesterday as critics on various fronts assailed his position. Among other things, the memos revealed that two captured Al Qaeda operatives were subjected to a form of near-drowning known as waterboarding 266 times.

Some Bush administration officials, including former Vice President Dick Cheney, accused the administration of endangering the country by disclosing national secrets. Cheney appeared on Fox News Channel to announce that he has asked the CIA to declassify reports documenting the intelligence gained from the interrogations. General Michael V. Hayden, the former CIA director, has also condemned the release of the memorandums and said the harsh questioning had value.

On the other side of the spectrum, human rights activists, congressional Democrats, and international officials pressed for a fuller accounting of what happened.

Senator Dianne Feinstein, a Democrat from California, the chairwoman of the Intelligence Committee, wrote Obama asking him not to rule out prosecutions until her panel completes an investigation over the next six to eight months.

Obama tried to calm the situation with his first visit to CIA headquarters since taking office. Concerned about alienating the agency, Obama went out of his way to lavish praise on intelligence officers, using words like "indispensable," "courage," and "remarkable" and promising his "support and appreciation."

"Don't be discouraged by what's happened in the last few weeks," he told employees. "Don't be discouraged that we have to acknowledge potentially we've made some mistakes. That's how we learn. But the fact that we are willing to acknowledge them and then move forward, that is precisely why I am proud to be president of the United States and that's why you should be proud to be members of the CIA."

As the debate escalated, Cheney weighed in, saying if the country is to judge the methods used in the interrogations, it should have information about what was obtained from the tough tactics. "I find it a little bit disturbing" that "they didn't put out the memos that showed the success of the effort," Cheney said on Fox News. He said, "There are reports that show specifically what we gained as a result of this activity."

On Sunday, Rahm Emanuel, the White House chief of staff, said on the ABC program "This Week" that "those who devised policy" also "should not be prosecuted."