US to join nuclear talks with Tehran

Iran's president says he is wary, but willing 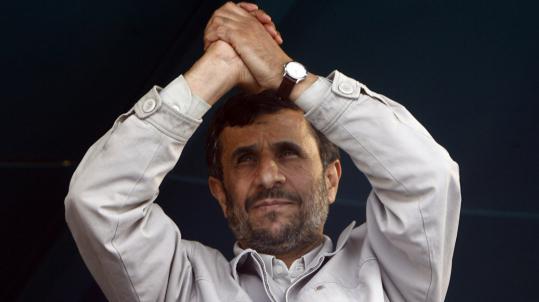 WASHINGTON - The Obama administration yesterday agreed to join regular, direct talks with Iran concerning its nuclear program along with five other countries, a major policy shift from previous administrations that have rejected face-to-face negotiations with Iranians.

Secretary of State Hillary Rodham Clinton portrayed the talks as part of a broader effort to open up communications with a nation that the United States has largely shunned since its 1979 revolution.

"We believe that pursuing very careful engagement on a range of issues that affect our interests and the interests of the world with Iran makes sense," Clinton told reporters yesterday. "There's nothing more important than trying to convince Iran to cease its efforts to obtain a nuclear weapon."

The decision to join the talks occurs as the Obama administration wraps up a much-anticipated review of Iran policy, and as top diplomats from Britain, France, Germany, China, and Russia met in London and decided to invite Iran to join a new round of negotiations centered on curtailing its enrichment of uranium, which can be used as fuel for either a nuclear weapon or to create electricity.

"If Iran accepts, we hope this will be the occasion to seriously engage Iran on how to break the logjam of recent years," said State Department spokesman Robert Wood. "If Iran accepts that invitation, we look forward to direct engagement."

US diplomats have been banned from meeting their Iranian counterparts - except in special, rare circumstances - since 1980, when Washington cut off diplomatic ties in the midst of the crisis following the seizure of the US Embassy in Tehran.

But Obama signaled as a presidential candidate last year that he would seek to engage US enemies, including Iran. In his inaugural speech, Obama pledged to "extend a hand" to those who are willing to "unclench" their fists.

Yesterday, Iranian President Mahmoud Ahmadinejad, a hard-liner and staunch defender of Iran's nuclear program, spoke positively about Obama's offer, telling an audience in the city of Isfahan: "If a hand has truly been extended with sincerity, based on justice and respect, Iran will welcome it."

But he also warned that if Obama's offer is only for appearances, then "Iran's answer will be the same as the one given to Mr. Bush."

Yesterday's announcement by the Obama administration was the most significant in a string of overtures to Iran, including a videotaped message from Obama to the Iranian people released on the Persian New Year, the partial lifting of a longstanding ban on face-to-face interaction between some senior State Department officials and their Iranian counterparts, and a direct diplomatic note passed by Clinton to the Iranian government regarding the fate of an Iranian-American journalist who has been arrested in Iran and charged with espionage.

Iran insists that it has the legal right to try to master the complex process of uranium enrichment to help create electricity, and has agreed to allow United Nations inspectors to monitor its actions. But the United States and its European and Arab allies insist that Iran lost the right to enrich uranium when it kept its enrichment facility secret and out of view of inspectors for more than a decade, raising suspicions that it is aimed at creating a weapon.

Iran's industrial-size enrichment program at Natanz was revealed to the world in 2002 by an Iranian exile group.

The country's nuclear program has become a matter of national pride in Iran. Even pro-Western politicians support it and risk public scorn if they signal that they might agree to shut it down.

"It is extremely difficult, if not impossible, for any faction in Iran to come out in favor of anything else than making sure they have enrichment on their soil," said Trita Parsi, president of the National Iranian American Council, a Washington-based organization that encourages US-Iranian engagement.

Parsi said the United States might consider allowing some small amounts of uranium enrichment for research purposes only, or perhaps to seek Iran's permission to convert Natanz into an international facility.

"These talks are going to be to a large extent about making sure that all sides find a face-saving way out of the current impasse," Parsi said.

The administration has declined to say whether it would consider any alternatives to a complete shutdown of enrichment efforts, pending its ongoing policy review.

But Kenneth Katzman, a senior analyst at the Congressional Research Service, a nonpartisan research wing of Congress, also said he believes the administration is considering dropping the US demand for zero enrichment on Iranian soil.

"Given how far along Iran is [in mastering the process of uranium enrichment], to put the genie back in the bottle is difficult at this point," he said. "It is almost like accepting the inevitable."

Since the Natanz facility came to light in 2002, Britain, France, and Germany have held on-and-off talks to try to persuade Iran to halt its enrichment activities. But former president George W. Bush refused to have the United States join in those talks until Iran suspended the enrichment program.

In 2005, the Bush administration shifted its stance somewhat, and agreed to help its European allies by offering incentives to sweeten the deal they were offering Tehran, such as removing the US opposition to Iran's entrance into the World Trade Organization.

But Iran failed to agree to the incentives package, so the UN Security Council, which includes Russia and China, imposed three rounds of economic sanctions on Iran.

Last summer, world powers offered a new package of incentives to Iran, and then-Secretary of State Condoleezza Rice also allowed top diplomat William Burns to attend the nuclear talks in Switzerland - but only as a onetime observer, not a regular participant.

Iran: life at the margins