'We want our money back,' Pelosi says 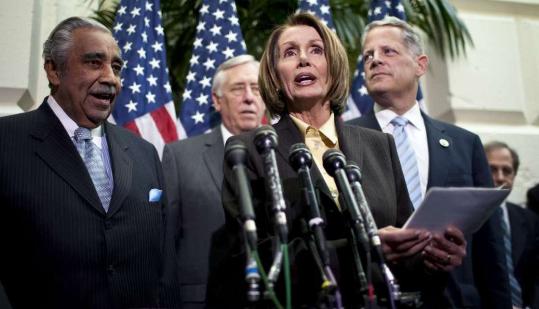 WASHINGTON - Denouncing a "squandering of the people's money," House lawmakers voted decisively yesterday to slap punishing taxes on employee bonuses paid by troubled insurance giant AIG and other companies bailed out by taxpayers.

The bill would impose a 90 percent tax on bonuses given to employees with family incomes above $250,000 at and other companies that have received at least $5 billion in government bailout money.

"We want our money back now for the taxpayers," House Speaker Nancy Pelosi said.

Democrats led the charge in an attempt to get in front of raging public anger over the AIG bonuses, totaling $165 million, which were paid to employees over the weekend. The recipients included traders in the unit that nearly brought about the company's collapse and forced the federal bailout, which stands at more than $180 billion so far.

But Republicans said the bill was a ploy to divert attention from mistakes made by the Obama administration and congressional Democrats in not blocking the bonuses. Representative John Boehner, the Republican leader in the House, called the bill a "political circus" that "is not getting to the bottom of the questions of who knew what and when did they know it."

In a statement last evening, President Obama said that the vote "rightly reflects the outrage that so many feel" over the bonuses and that he looks forward to "a final product that will serve as a strong signal to the executives who run these firms that such compensation will not be tolerated."

Representative Charles Rangel, a New York Democrat and chairman of the tax-writing House Ways and Means Committee, said he expected local and state governments to take the remaining 10 percent of the bonuses, nullifying the payouts. Rangel said the bill would apply to mortgage giants and , among others, while excluding community banks and other, smaller companies that have received less bailout money.

While Republicans and other critics questioned whether the bill was legal, a tax specialist said there is plenty of precedent for levying punitive taxes on behavior that lawmakers find objectionable. "You can write very narrowly tailored laws," said Robert Willens, a corporate tax lawyer in New York.

New York state Attorney General Andrew M. Cuomo said yesterday that AIG has given him the list of employees who received the retention bonuses, but he won't release any names until his office has answered any security concerns. He also said he will work with AIG to determine which workers have decided to return the payments. AIG's CEO, Edward M. Liddy, has asked those who received bonuses of more than $100,000 to return at least half.

The tax bill passed as controversy swirled around the disclosure that a provision that would have made such payouts illegal was stripped from last month's $787 billion economic stimulus bill by its Democratic sponsors.

Senator Chris Dodd, a Connecticut Democrat who is chairman of the Banking Committee, said Wednesday his staff agreed to a request from the Treasury Department to delete the provision because of legal issues. However, Dodd said he was not aware of any AIG bonuses at the time the change was made.

Geithner said that he did not know about the "full scale" of the AIG bonuses until March 10, two days before he informed the White House, but "I was in a position where I didn't know about those sooner. I take full responsibility for that."

Republicans are ratcheting up the pressure on Geithner, though Obama has stood steadfastly behind him so far.

Representative Connie Mack of Florida on Wednesday became the first to publicly call for Geithner to step down. Yesterday, Senator Jim Bunning, a Kentucky Republican, said on Fox Business Network that Geithner should resign or be dismissed, saying the former New York Fed chief has "an incestuous relationship with Wall Street."

In the CNN interview, Geithner brushed off calls to resign, saying it "just comes with the job."