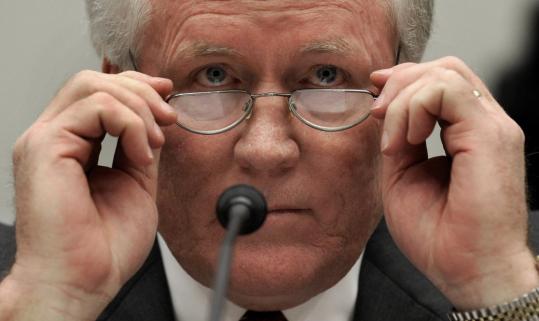 WASHINGTON - Working to quell a furor over decision to award bonuses to employees whose deals crippled their company, the CEO of the limping financial behemoth announced yesterday that he had requested that the workers forfeit some of the controversial payments.

Edward M. Liddy told a House subcommittee that he asked employees who had received more than $100,000 in the so-called retention bonuses to "step up and do the right thing" and return at least half of what they received. An unidentified number, according to Liddy, volunteered to give back their bonuses in their entirety.

But the concession did little to assuage indignation or alter the hearing's dynamic: a gathering of aggrieved shareholders confronting the runaway management of a company they control but seem happy to loathe.

Representative Barney Frank, the Massachusetts Democrat who is chairman of the House Financial Services Committee, said he still planned to subpoena the names of individuals who received the bonuses for potential public disclosure. He was unmoved even after Liddy read from personal death threats targeting employees and their families, including one suggesting executions by piano wire.

Today the House plans to vote on whether to seize their compensation through a 90 percent tax on bonuses paid to employees earning more than $250,000 at AIG and other firms receiving funds from the bailout.

AIG quickly became a target of public rage after it was disclosed over the weekend that the company had awarded $165 million to employees of a London-based division that Pennsylvania insurance commissioner Joel Ario described yesterday as a "hedge fund that failed to hedge its own bets" and became "a poster child for systemic risk."

The 418 individual bonuses ranged from $1,000 to $6.4 million, with 298 receiving more than $100,000, according to information obtained through a subpoena by New York state Attorney General Andrew M. Cuomo. More than 50 have since left the company, including 11 of the 73 who received more than $1 million each, said Cuomo, who issued a statement yesterday saying that Liddy's offer was "simply too little, too late."

Liddy, who would not say how many employees had chosen to return at least part of their bonuses, argued that the payments, while "distasteful," were necessary to keep traders with the expertise to "wind down" the division's portfolio. That work, he said, is essential for taxpayers to be repaid as much of the $180 billion they have put into AIG as possible.

"I'm trying desperately to prevent an uncontrolled collapse of that business," he said. "The risk was too great that we would lose all the progress we made."

Liddy, who said "we've heard the American people loudly and clearly" on their anger over the bonuses, testified yesterday that the Federal Reserve had been aware of AIG's contractual obligation to deliver the bonuses but did not intervene. The capital markets subcommittee chairman, Pennsylvania Representative Paul Kanjorski, said that he knew about the bonuses weeks ago and instructed Liddy to abandon them.

Several subcommittee members insisted that there should be little reward for those who developed and issued complex derivative instruments that amounted to "Madoff writ large," as New York Democrat Gary Ackerman put it.

"This old schoolteacher is going to give you a little bit of advice: Pay the $165 million back," Ackerman told Liddy. "You've got legislation coming down the pike that they're going to call 'I can't believe it's not waterboarding.' "

Yet despite a broad interest in recovering the bonuses, there has been little consensus about the most efficient way for the federal government to do so. White House officials have said they are exploring whether there are channels to abrogate the compensation contracts, while members of Congress have proposed an array of confiscatory taxes narrowly targeted to apply to the bonuses received by AIG employees.

"Bonuses should be based on creating value, not destroying it, at a formerly great company like AIG," said New York Representative Carolyn Maloney, author of a bill to impose a 100 percent tax on the bonuses.

Frank discouraged the government from trying to tax or regulate its way to reparations, acknowledging the legal questions surrounding federal meddling in private contracts.

"What I think we should be doing is exercising our rights as owners of this company, and bring lawsuits," said Frank, noting that the government now owns nearly 80 percent of the company. "These people performed so badly, the magnitude of the losses were so great, that we're justified in rescinding these bonuses."

Liddy, a longtime insurance executive who joined AIG last fall at government request as a $1-per-year CEO, said he is trying to build a new AIG with new levels of transparency and accountability in the hopes of quickly paying back $38 billion borrowed from the Federal Reserve and $40 billion invested from the financial rescue package passed by Congress last fall.

"You can vilify this new man if it makes you feel better," said Representative Spencer Bachus of Alabama, the committee's ranking Republican member. "We need to give this new management team the time it needs to get this job done. . . . The government trying to get more involved than it is, is just going to be a sad experience."

Representative Stephen Lynch, a Massachusetts Democrat, had a contentious exchange with Liddy, accusing him of going along with a contract that read like "the captain and the crew of the ship reserving the lifeboats."

"Well, you take it rightly. Offense was intended," Lynch shot back.

Republicans chose to turn responsibility for the bonuses back on the Obama administration. Representative Connie Mack of Florida demanded the resignation of Treasury Secretary Timothy Geithner. President Obama said yesterday he had "complete confidence" in Geithner and said the "buck stops with me."

Senator Chris Dodd, a Connecticut Democrat who is chairman of the Senate Banking Committee, acknowledged yesterday that his staff agreed to dilute an executive pay provision in the economic stimulus bill that would have applied retroactively to recipients of federal aid and possibly blocked the AIG bonuses. Dodd told CNN he reluctantly agreed to the request, which he said came from Treasury Department officials he would not identify, who said it would cause numerous lawsuits.

A Republican who boasted that he opposed the initial bailout legislation suggested that the bonus flap offered an opportunity for AIG's derivative specialists to "have skin in the game" in helping to save the company and recover the federal investment. Would the company, asked Texas Representative Jeb Hensarling, agree to go "double or nothing" on the bonuses?

"Interesting idea," Liddy replied. "I would guess it's probably not in the taxpayer's best interest to go there."

Sasha Issenberg can be reached at sissenberg@globe.com