Bush says he won't criticize because Obama 'deserves my silence' 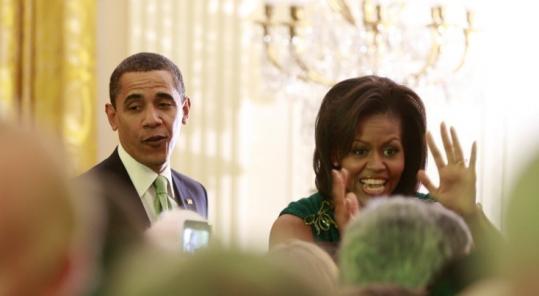 CALGARY, Alberta - Former president George W. Bush said yesterday that he won't criticize President Obama because Obama "deserves my silence," and said he plans to write a book about the 12 toughest decisions he made in office.

"I'm not going to spend my time criticizing him. There are plenty of critics in the arena," Bush said. "He deserves my silence."

Bush said he wants Obama to succeed and said it's important that he has that support. Talk-show host Rush Limbaugh has said he hopes Obama fails because his policies would hurt the country.

"I love my country a lot more than I love politics," Bush said. "I think it is essential that he be helped in office."

Obama fends off dissenters on budget
Facing discomfort and some dissension in his own ranks, President Obama defended his sweeping $3.6 trillion spending plan yesterday after huddling with top Democratic budget writers.

While Republicans have been saying that Obama wants to raise taxes during a recession - and some accuse him of using the economic crisis to move the country toward socialism - some Democrats are also fretting about some major components of Obama's plan, including carbon emissions limits that would lead to higher energy bills, and restrictions on how much in charitable donations that higher-income taxpayers could deduct.

Republicans noted that Conrad, himself, said last week that he worried that the growing deficit "fundamentally threatens the economic security of this country. I believe it in my bones."

Conrad told reporters yesterday that he anticipates new estimates this week will show a worse fiscal picture than predicted by Obama's budget - and that will probably mean less spending on Obama initiatives and greater efforts to curb the deficit.

Obama is projecting a federal deficit of $1.75 trillion this year, by far the largest in history, but says he can get it down to $533 billion by 2013. But, he said, he won't cut back spending that will lead to real prosperity.

Obama also lashed out at Republicans who are opposing his budget without proposing alternatives.

" 'Just say no' is the right advice to give your teenagers about drugs," Obama said. "It is not an acceptable response to whatever economic policy is proposed by the other party."

At the same time, the White House labeled as a "youthful indiscretion" a misdemeanor theft that Vivek Kundra committed 13 years ago.

Kundra was appointed March 5 as White House chief information officer in charge of federal computer purchasing but was put on leave after the FBI raided the DC technology office he headed until recently. Agents arrested a city employee and a tech consultant on corruption charges.