US would consider tapping oil in ANWR 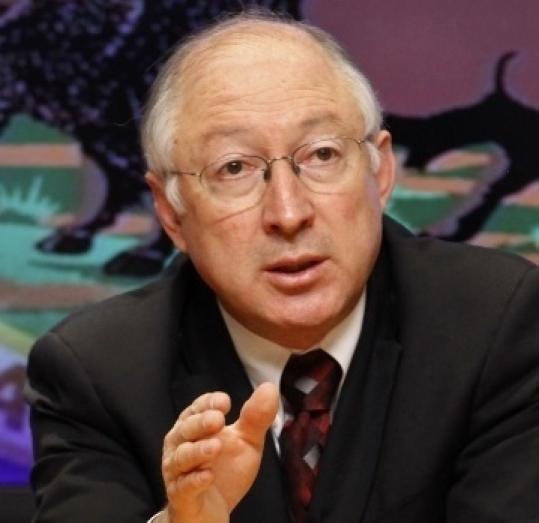 "My message to the oil companies will be simple." -- Ken Salazar, Secretary of the Interior.
By H. Josef Hebert Associated Press / March 17, 2009
Text size – +

WASHINGTON - Interior Secretary Ken Salazar said yesterday that he would consider tapping oil from Alaska's Arctic National Wildlife Refuge by drilling outside its boundaries if it can be shown that the refuge's wildlife and environment will remain undisturbed.

But Salazar emphasized that the Obama administration stands firm that the Alaska refuge, known as ANWR, "is a very special place" that must be protected and that he is not yet convinced directional drilling would meet that test.

Senator Lisa Murkowski, Republican of Alaska, has introduced legislation that would allow companies access to oil beneath the Arctic refuge's coastal plain through directional drilling from platforms outside the refuge itself.

"The question of whether or not you can do directional drilling without impairing the ecological values of ANWR is an open question. Most of what I've seen up to this point is it would not be possible to do that," Salazar said in a conference call with reporters.

The directional drilling idea is "something that can be discussed," Salazar said, because of recent advancements in technology.

But Salazar said that protecting ANWR's ecology and wildlife is "not something we're going to change our position on" when considering future oil and gas production. "There are special places to be protected and ANWR is one of those," Salazar said when asked about Murkowski's proposal.

The political battle over access to an estimated 11 billion barrels of oil beneath ANWR's coastal strip has been fought for more than two decades. Congress has repeatedly rejected opening the refuge to oil companies, arguing that drilling would harm an ecologically sensitive area that is home to millions of migratory birds, polar bears, caribou and other wildlife.

The Bush administration contended the oil resource is needed and drilling could be done in a way that protects the environment.

Salazar said he will meet Thursday with major oil company executives to reassure them that the Obama administration views oil as important to the country's energy future.

"My message to the oil companies will be simple. They are and will remain an important part of our energy future," said Salazar. "We share much common ground. We need to have an open dialogue."

At the same time, Salazar defended proposals to end a manufacturers' tax break for the largest oil companies as well as higher royalties and new fees on oil pumped from federal waters.

"It's simply a sense of fairness," said Salazar.