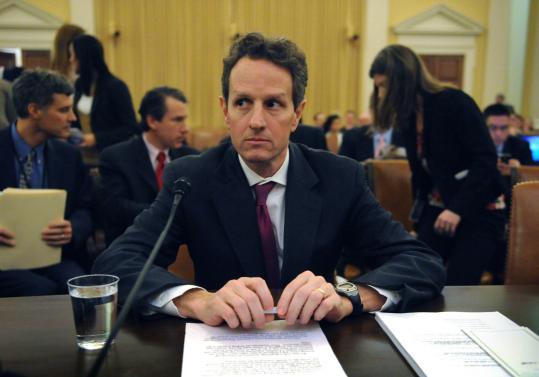 WASHINGTON - Two of the administration's top economic officials defended President Obama's $3.6 trillion budget plan yesterday, arguing that the proposal would finance a historic investment in critical economic priorities while restoring balance to a tax code tipped in favor of the wealthy.

Rebutting Republican charges that the plan would raise taxes on a broad swath of Americans, White House budget director Peter Orszag and Treasury Secretary Timothy Geithner said the tax increases - aimed primarily at business and a few million families who earn more than $250,000 a year - are essential to reducing record budget deficits bloated by bailouts of the financial sector and federal spending to prop up the economy.

"This is a deep moral imperative to make our society more just. But it's very good economic policy, too," Geithner told the House Ways and Means Committee, emphasizing that none of the tax increases would take effect "until we are safely into recovery" in 2011. "It will make our nation stronger and not just more just."

Republicans countered that high earners are not the only targets of Obama's budget proposal: His plan to raise $646 billion over the next decade by auctioning off pollution permits to industries that generate greenhouse gases would increase the cost of gasoline, electricity, and other forms of energy for every US consumer, regardless of income, they said.

While Obama proposes to use some of the profits from that so-called cap-and-trade program to finance a permanent tax credit of up to $800 a year for working families, Representative Dave Camp, Republican of Michigan, said the value of the tax cut would pale in comparison to rising energy costs.

"The 20 cents an hour you might get under the 'Make Work Pay' credit would barely cover the added $1.60 per gallon EPA says gas could cost, let alone the potential for an 80 percent jump in electricity rates," said Camp, the senior Republican on the Ways and Means Committee.

Geithner and Orszag, testifying separately before the House Budget Committee, both defended the proposal as a critical step toward reducing the effects of global warming. But some Democrats are worried about the effect of a cap-and-trade system and are urging that the money raised through permit auctions be returned to consumers.

Some Democrats also joined Republicans in complaining about another tax provision: a proposal to reduce the value of itemized deductions for charitable contributions and other items for high-earning families. Representative Shelley Berkley, Democrat of Nevada, called the proposal "a nonstarter," telling Geithner: "I'd like to think that people give out of the goodness of their hearts, but that tax deduction helps to loosen up their heartstrings."

Outside the hearing, Berkley said the proposed tax increase was "the number one issue" on the minds of her constituents over the weekend. Reminded that the provision is intended to raise hundreds of billions of dollars to finance an expansion of health insurance coverage, Obama's top domestic priority, she said: "We can find another way."

Despite those and a few other contentious issues, Obama's budget request was generally well-received yesterday, as lawmakers took their first opportunity to comment on an agenda that many have described as the most ambitious and transformative since the dawn of the Reagan era. Democratic budget leaders said they are likely to endorse most of Obama's proposals sometime in April in the form of a nonbinding budget resolution. That document, which does not require the president's signature, sets goals for spending and revenue that must be enacted separately.

Republicans and Democrats praised Obama for delivering an honest assessment of the nation's finances that acknowledges that Congress will never permit the alternative minimum tax to collect billions of fresh dollars. Meanwhile, Obama's budget includes the projected cost of the Iraq war, a big-ticket item left off the books by former President George W. Bush.

Representative Paul Ryan of Wisconsin, the senior Republican on the House Budget Committee, also complimented the administration's proposal to charge wealthier families more for prescription drug coverage under Medicare, the federal health program for retirees, and to "stop subsidizing" agribusiness.

But Ryan and other Republicans accused the administration of using budgetary maneuvers to inflate projected savings and minimize future budget deficits.