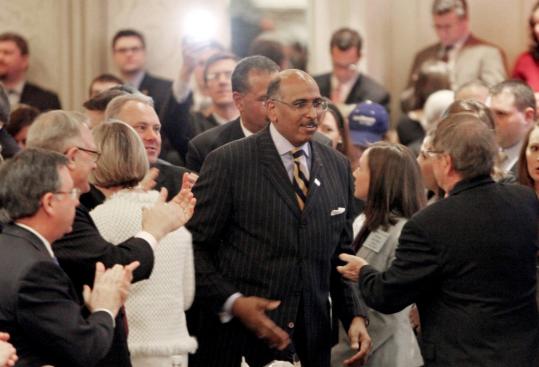 "You can't use Deval Patrick as a barometer for Republican strengths and weaknesses" in New England, said Steele, who has vowed to rebuild his party in New England, where Republican support has dwindled. "That was a historic election. You have to look at it for what it is."

But he predicted that both Patrick, who followed four straight Republican governors and is running for reelection next year, and President Obama will lose star power the second time around without history on their side. The president and the governor, he said, will be run-of-the-mill political incumbents and voters "will take a more normal view" of their candidacies.

"It will be interesting to see what happens in 2012, when the novelty of having a black president has worn off," Steele said. "I don't have to guess the answer."

The critiques of Patrick and Obama come just weeks after Steele broke the color line, winning the Republican National Committee chairmanship in a six-round election. He promptly fired the entire RNC staff and outlined ambitious plans for a turnaround following the party's heavy losses in the last two elections - including the presidency and control of Congress.

Steele, Maryland's former lieutenant governor, vowed to bring all ethnic and racial groups, and the "the hip-hop generation," into the GOP. He also appointed himself Obama's toughest critic, throwing a rapper's boast at the new president: "How'ya like me now?"

For black Republicans, largely marginalized - and at times derided - by other black people during Obama's historic inauguration, Steele proves the Grand Old Party isn't just for whites. "The party is beginning to show its inclusiveness," said Tara Wall, a former RNC spokeswoman.

But some political analysts doubt whether Steele can recruit minorities, a herculean task in the age of the highly popular Obama. Others question whether electing Steele was the party's nod to white swing voters who supported the first black president - a tacit sign that Republicans have become more inclusive.

A black chairman "is almost exclusively about white moderates," said Michael K. Fauntroy, a political science professor at George Mason University. "If you're a moderate white, it's easier to vote with a party that appears to reflect where the country's going."

Not so, said Steele, noting the Republican Party's historic role in opposing slavery and favoring African-American rights during Reconstruction. Those arguing that his election simply puts a black face on an exclusively white party "don't know me" and don't understand his commitment to recruiting people of color.

"I have a pretty doggone good Republican message," said Steele, whose genial style won praise as he rose to prominence in Maryland. "I need to show how our values and their values line up. The question is, how do you begin to engage those folks at that meeting point?"

Yet Ronald Walters, University of Maryland professor, noted that Republicans were hit hard in 2006 and 2008 elections "essentially because of message and their position on the issues." Party heavyweights, he said, seem to be ignoring projections that indicate whites will no longer dominate the US population in the coming decades.

Without fundamental change, Walters said, it will be tough for the GOP "to convince people that they're worthy of governing."

By any measure, the RNC has elected a leader experienced in facing long odds.

Adopted at birth, Steele was raised in a working-class household, and graduated from prestigious Johns Hopkins University. He almost flunked out, however, before qualifying for readmission after summer school. Steele, a Roman Catholic, entered seminary after graduation but left for Georgetown University law school and Republican Party politics, rising to the state chairmanship in Maryland, a Democratic stronghold.

In 2002, Republican gubernatorial candidate Robert Ehrlich chose Steele as his running mate, and the pair defeated the Democratic ticket headed by Kathleen Kennedy Townsend, the state's lieutenant governor and niece of Senator Edward M. Kennedy of Massachusetts. The win made Steele the first African-American to hold a statewide elected office in Maryland.

Four years later, Steele won the Republican nomination for a vacant US Senate seat, taking on Ben Cardin, a veteran Democratic congressman. Cardin defeated him by 10 points, but Steele held his own in a reliably Democratic state in a year Democrats made big national gains - an impressive run that set him up for the chairmanship.

Ed Gillespie, a former RNC chairman and a White House aide to President Bush, said Steele's election "injected a shot of adrenaline into the party." He's also confident Steele can pull off a difficult feat: opening the party to minorities and white moderates while keeping the conservative rank-and-file on board.

"The key to any election and to winning nationwide is to hold your base and capture the bulk of the middle - we haven't done that for two cycles now," said Gillespie. The new chairman, he said, is a friend who "has front-line experience in reaching out to the middle. That is very valuable experience in this job."

Still, Obama's phenomenal popularity, which drew nearly 2 million people to his inauguration, casts a huge shadow over Steele's plan to rebuild the party with nonwhite voters. "It's a greater challenge when you have a historic figure in the presidency," Gillespie said.

Wall, who is now an editorial page editor at The Washington Times, said the new chairman must not change the party's core philosophy, but extend it to a new range of issues to a new, diverse audience.

Job one: get back to Republican basics, surround himself with people "who get it," and eliminate "some of the same old consultants and strategists from back in the day" that don't reflect diversity, Wall said, adding that Republicans need to put issues like social justice and the environment on their platform to draw in minority voters.

That may be easier said than done, given the Republicans' general reputation of racial insensitivity.

Steele vied for the RNC chairmanship with Chip Saltsman, a Tennessee conservative who was criticized for distributing a music CD with the parody song, "Barack the Magic Negro." Latinos are still angry over the right's security-first stance on immigration reform. And while Steele pledged to make the GOP "relevant" to all voters, he stands to the right on gay marriage and civil unions - social issues that split the minority vote.

At the same time, federal investigators confirmed earlier this month that they are examining Steele's campaign-finance records from his Senate race, stemming from more than $37,000 paid to his sister's defunct catering business. Steele has denied any wrongdoing, but news of the investigation clouded his first days in office.

Meanwhile, despite public support for Obama's economic stimulus plan, the entire House Republican caucus voted against it, and got a big thumbs-up from their new chairman: "The goose egg you laid on the president's desk was just beautiful," Steele said.

That's more likely to shore up traditional conservative support for Steele than win over nonwhite voters, many of whom will benefit from spending plans in the stimulus bill, according to economists. And with opinion polls showing the GOP's popularity languishing at below 40 percent - compared to Obama's 67 percent - Steele's got a tough sales job, especially among African-Americans.

"I believe the GOP has lost a generation of voters to Barack Obama and the Democrats. Having a black chairman cannot overcome that," said George Mason's Fauntroy. Compared to the first black president, a Democrat, and the first black GOP chairman, Fauntroy said, "there's no contest."