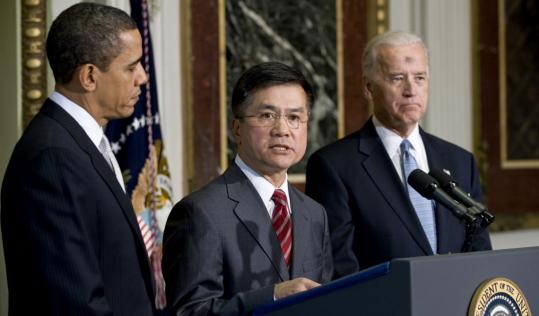 "We've tried this a couple of times. But I'm a big believer in keeping at something until you get it right," Obama said. "And Gary is the right man."

The president's two earlier choices for the post dropped out - Democratic Governor Bill Richardson of New Mexico over questions about a donor and state contracts, and Republican Senator Judd Gregg of New Hampshire, who had a change of heart about working for a president from the opposition party - well before the Senate had an opportunity to confirm them.

Obama praised Locke as a man who shares his vision for turning around the moribund economy, and as someone who is committed to doing what it takes to keep the American dream alive and whose family history embodies that dream. "Gary will be a trusted voice in my Cabinet, a tireless advocate for our economic competitiveness and an influential ambassador for American industry who will help us do everything we can, especially now, to promote our industry around the globe," Obama said.

In turn, Locke said he was committed to making the sprawling agency an "active and integral partner" in advancing Obama's economic agenda, as it nurtures innovation, expands global markets, protects ocean fisheries, and fosters growth.

"The Department of Commerce can and will help create the jobs and the economic vitality our nation needs," Locke said.

If confirmed by the Senate, Locke would assume control of a large agency with a broad portfolio that includes overseeing many aspects of international trade and the 2010 Census. Prompting outcry from Republicans, the administration recently took steps to assert greater control over the US head count. It has political implications because it is used to redraw congressional districts.