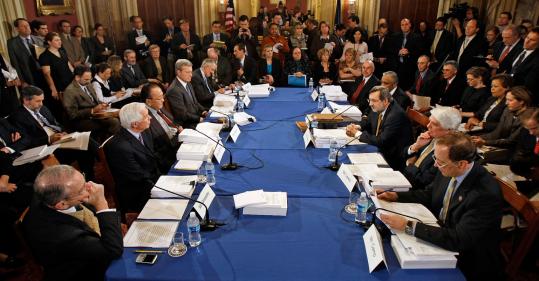 Members of the Senate and House Appropriations Committees met to hash out differences between the two versions of the economic stimulus legislation in the LBJ Room at the US Capitol in Washington, D.C., yesterday. (Chip Somodevilla/Getty Images)
By Sasha Issenberg Globe Staff / February 12, 2009
Text size – +

WASHINGTON - Democratic leaders in Congress reached a compromise on an economic stimulus bill yesterday, excising some tax cuts and new school funding to settle on a package totaling $789 billion to confront the worst recession in decades.

The deal was announced by Senate leaders, who appeared to drive the private negotiations with their House counterparts. They had to navigate competing interests as they worked to deliver a bill to President Obama by his end-of-week deadline, balancing a House majority that sought robust new funding for long-standing priorities and Senate centrists of both parties who had threatened to scuttle any bill that emerged larger than $800 billion.

"We came a long way in a relatively short time," said Senator Joe Lieberman, a Connecticut independent who affiliates with the Democrats and helped broker Republican support for the bill. "Everybody gave something in these negotiations to achieve something bigger for our country and our people."

Barring any last-minute snags, the bill will go to both chambers for an up-or-down vote as soon as today to send it to Obama's desk.

The contours of the compromise plan - significantly smaller than either the $819 billion plan the House passed on Jan. 28 or the $838 billion version the Senate approved Tuesday - demonstrated the guidance and prodding of a popular White House, which held off from authoring the original House legislation but orchestrated the final Senate negotiations once the legislation began to teeter last week.

In a statement last evening, Obama thanked "the Democrats and Republicans in Congress who came together around a hard-fought compromise that will save or create more than 3.5 million jobs and get our economy back on track."

The elements that survived reflected the new president's shifting ambitions in what he calls the worst economic crisis since the Great Depression. He began the year trying to earn broad bipartisan support for the package, but this week his chief of staff, Rahm Emanuel, worked merely to hold enough votes for final passage.

A middle-class tax cut Obama pledged during his campaign survived largely intact, promising most workers $400 a year (and couples $800), about $13 more a week parceled out by decreasing the federal income taxes withheld from paychecks. The White House originally sought $500 per worker and $1,000 per couple.

The compromise also preserves expanded benefits for the unemployed, while costly provisions with backers in each chamber fell away.

Negotiators abandoned half of the $79 billion in direct aid to states in the House version, along with tax cuts that had been adopted by the Senate with the support of Republican members who intended to oppose the legislation regardless. A $15,000 tax credit for homebuyers and a deduction for the sales tax paid by purchasers of new cars were both slashed.

About $500 billion of the bill is new spending, while the remainder is tax relief.

To the end, the leverage was held by three moderate, northeastern Republicans - including Susan Collins and Olympia Snowe of Maine - who had threatened to withdraw their support for the bill if it did not emerge from the conference committee to their liking. Over the last week, they proved a crucial bridge for an expanded Democratic caucus to reach the 60 votes necessary to pass such a bill in the Senate.

"The Republican moderates were able to see to it that more than $100 billion was cut from this program. Now there are people who like to spend less, some like to spend nothing," said Pennsylvania Senator Arlen Specter, the third key GOP supporter. "The fact is we hung tough and it was modified only in the case of absolute necessity."

Yet most Republicans, including those in the House who voted unanimously against the bill, said that the changes made it no more appetizing to them, though there not enough of them to stop passage.

House GOP leader John Boehner of Ohio told reporters that "it appears that Democrats have made a bad bill worse by reducing the tax relief for working families in order to pay for more wasteful government spending."

Obama, who has insisted that such a bill offers the nation its only path away from economic catastrophe, heralded the congressional negotiations in an appearance yesterday morning designed to build public support for new spending on infrastructure projects.

"We're at the doorstep of getting this plan through Congress, but the work is not over," he said at a suburban Virginia highway construction site.

Indeed, even after Reid's afternoon announcement of a deal, the House-Senate conference committee required to formalize the arrangement was postponed. The move was apparently made by House Speaker Nancy Pelosi, who held out to expand the bill's funding for school construction.

She emerged last evening from meeting with her rank and file to say they are on board and are proud of the work they did on the bill.

"I think people are pretty happy," she said, though she acknowledged there were items she wished were still in the package.

The dispute seemed to highlight continued friction between Democratic leaders in the two chambers. Earlier this week, Pelosi had criticized Senate Democrats for removing spending provisions from the bill that passed her chamber two weeks ago and vowed not to retreat from them in conference-committee negotiations.

"Pelosi can rule with an iron fist, but Reid has to walk a tightrope," said Rebecca Kirszner, a former Reid aide who now works as a political consultant in New York. "If Pelosi loses a few votes, she can still likely get a deal, but if Reid loses a few votes the deal doesn't happen."