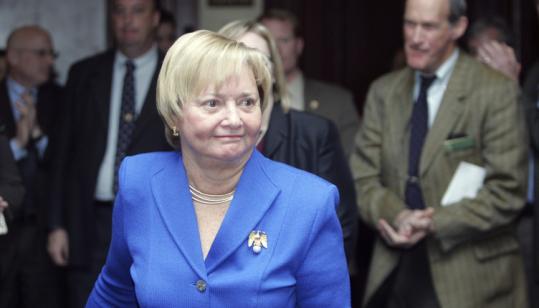 In fact, Newman's views on hot-button political issues are unknown, and she held back yesterday when asked how she might differ politically from Gregg, who was selected as President Obama's nominee for commerce secretary.

Governor John Lynch's announcement came at a feel-good press conference yesterday marked by cheers and laughter from a crowd filled with those who have come to know and respect Newman from her decades of service in the public, private, and nonprofit sectors. The selection lacked the drawn-out intrigue and controversy that has swirled around Senate openings in New York and Illinois.

Lynch and Newman first met nearly 40 years ago when the future governor was a college freshman and Newman was a young dean at the University of New Hampshire. They hugged yesterday after he introduced her.

"In my wildest, wildest dreams it never occurred to me that we would be standing here today," said Newman, 63, a former White House administrator, congressional chief of staff, and college executive, in a televised press conference from the New Hampshire State House.

Newman, a Lawrence, Mass., native, does not plan to seek election in 2010 when the term expires and will not endorse a candidate at that time but vows to do more than keep the seat warm.

"I commit to the citizens of New Hampshire that I will work not as a caretaker, but tirelessly and to the very best of my ability to fulfill the trust the governor has placed in me today," said Newman, who, if Gregg is confirmed, will become the record 18th woman in the 100-member Senate and make New Hampshire's delegation one of four all-female Senate teams, along with Democratic Senator Jeanne Shaheen.

Lynch said he quickly thought of Newman after Gregg approached him in mid-January to signal his possible Cabinet selection and made it clear he would leave the Senate only if replaced by a fellow Republican. The president's administration understood as much.

"My response was to find the right person for New Hampshire: Not just a Republican, but a person I was confident would represent the people of New Hampshire well, someone of outstanding integrity, someone who would put the interest of the people of New Hampshire above all else and someone who would work with Democrats, Republicans, and President Obama to address the challenges that our nation faces," Lynch said. "Bonnie Newman is someone who meets all of these qualifications. Bonnie is someone I would have considered regardless of party."

Newman did not elaborate on her political views yesterday or how she might differ from Gregg, beyond describing herself as a "reasonable Republican."

"The devil is always in the details," she said, vowing to review each bill on its merits, and saying that she would offer more specifics about her political positions should Gregg be confirmed.

Newman's selection elicited praise from Democrats and Republicans at all levels of elected office as well as from people with whom she served in the private, education, and nonprofit sectors. They called her a thoughtful, fair, and inclusive leader.

"She has a remarkable capacity to zero in on what's important on any debate," said John D. Crosier Sr., a trustee of the University System of New Hampshire who served with Newman during her tenure as dean of the Whittemore School of Business and Economics, and later as interim president of the university, from 2006-07.

Newman, who holds a master's degree in education from Penn State and has rreceived five honorary degrees, served as a UNH administrator in the 1970s before leaving to become involved in Republican politics.

In the 1980s, Newman held a variety of roles in Washington, serving as chief of staff to Gregg when he was a US representative and holding multiple positions in the executive branch. She was assistant commerce secretary for economic development under President Reagan and head of administrative operations for the White House under the first President Bush.

Returning to New England, Newman assumed a variety of positions in business and education, including stints as executive dean of Harvard's Kennedy School and president of the New England Council, a regional business lobbying group.

Ann McLane Kuster, a Democratic activist who has known Newman since 1980, said, "Bonnie represents the best of the New Hampshire tradition of moderate Republicans."

Kuster, a lawyer and lobbyist who supported Obama in the primary, said advocates and opponents of abortion rights were scrambling yesterday around the Capitol to find out more about Newman's political views, asking each other, "Is she one of yours?"

Newman's appointment, with her abortion views still unknown to the public, carried echoes of the nomination of another New Hampshire product, Supreme Court Justice David Souter, nearly two decades ago.

Tom Rath, the Republican strategist and former state attorney general who helped prepare Souter for that process, said Newman will bring "enormous goodwill" to Washington from the political, business, and nonprofit leaders who know and respect her in New Hampshire. But her politics, at the moment, remain somewhat mysterious.

Lisa Wangsness of the Globe Staff contributed to this report Eric Moskowitz can be reached at emoskowitz@globe.com.