For Gregg, an unlikely new assignment

'Stunned' to get the call from Obama 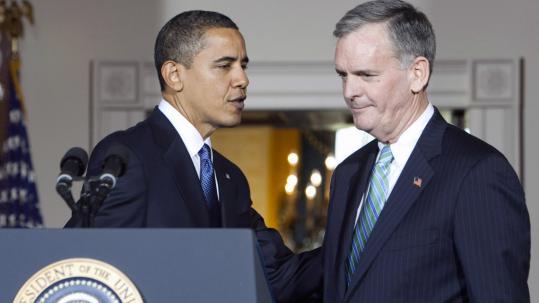 WASHINGTON - Senator Judd Gregg was "stunned" when, a few days before the inauguration, Barack Obama invited him to the transition office to talk about the commerce secretary's job.

The New Hampshire Republican, one of the Senate's most prominent and reliable fiscal conservatives, barely knew Obama. He stood in for John F. Kerry during practice debates when George W. Bush ran for reelection. He once even voted to abolish the Commerce Department.

Yesterday, Gregg still looked a bit dazed as he accepted Obama's nomination at a White House press conference, thanking New Hampshire Governor John Lynch, a Democrat, for agreeing to replace him with a Republican, a condition Gregg set for taking the job. If his seat changed hands, Democrats could have come within a single seat of a 60-vote, potentially filibuster-proof supermajority in the Senate - last year's Minnesota race remains unresolved - which Gregg said would be unfair to his colleagues.

He told reporters later that though he and Obama "weren't friends" as fellow senators, he has been impressed with the new president so far and welcomes the opportunity to help fix the economy.

"This economy has thrown a lot of people in the boat together, and we're all trying to row together," Gregg said.

Flanked by Gregg and Vice President Joe Biden, the president said it was time to "put aside stale ideology and petty partisanship, and embrace what works." Obama praised Gregg's fiscal restraint, saying he was "famous, or infamous" for his "strict fiscal discipline."

"It's not that he enjoys saying 'No' - although if it's directed at your bill, you might feel that way - it's that he shares my deep-seated commitment to guaranteeing that our children inherit a future they can afford," Obama said.

If confirmed, Gregg would be the third Republican in Obama's Cabinet, joining Defense Secretary Robert M. Gates, who stayed on from the Bush administration, and Transportation Secretary Ray LaHood, a former Illinois congressman.

The Commerce Department handles a wide array of functions; in addition to promoting trade and small-business development, it also oversees the National Oceanic and Atmospheric Administration, the US Census, and patents and trademarks.

Gregg said yesterday that his most important priority at Commerce would be job creation, and that he would serve as Obama's ambassador on economic issues to Republicans in Congress. Among the most urgent is the president's stimulus package, which Republicans say is too expensive and not sufficiently focused on tax cuts. Gregg called it "an extraordinarily bold and aggressive, effective, and comprehensive plan to get the economy moving."

Gregg sheepishly called his vote more than a decade ago against funding the Commerce Department a remnant of his "wild and crazy days," adding that he has since been an "extremely strong supporter of that agency."

Gregg, 61, comes from a wealthy Nashua political family - his father, the late Hugh Gregg, was governor in the 1950s. Trained as a lawyer with a specialty in tax law, he has spent most of his adult life in public service, serving as an executive councilor, congressman, governor, and, since 1993, senator.

Ross Gittell, a professor of business and economics at the Whittemore School of Business and Economics at the University of New Hampshire, said Gregg has helped secure money for environmental science research for UNH and clearly sees the connection between green energy and business development in New Hampshire, something that is also a top agenda item for the Obama administration. He described Gregg as pragmatic and nonideological.

Tom Rath, a veteran New Hampshire GOP strategist who has worked closely with Gregg over the years, said he believes Gregg decided to take the job out of a deep concern about the economy.

"I think he may just say that this is one of those tipping points, one of those moments when things could go either way," he said. "You have a chance to do something, you'd better go do it."

But some analysts questioned whether Gregg would have the opportunity to work on significant economic issues in a department that has typically been overshadowed on such issues by the Treasury, the Federal Reserve, and the Council of Economic Advisors.

"I am baffled as to why Judd Gregg would want to go from being ranking member on the Budget Committee to a backwater department," said Daniel J. Mitchell, an economist and senior fellow at the libertarian Cato Institute.