Some call for Bush administration trials 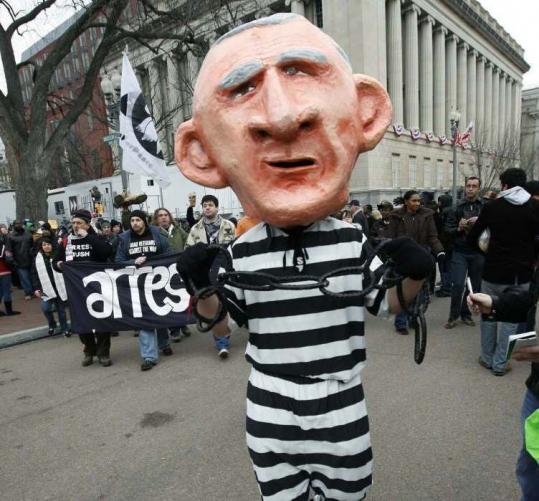 A demonstrator dressed up as George W. Bush in a prison outfit protested at the White House before the inauguration. (Mike Segar/ Reuters)
By Joseph Williams Globe Staff / February 3, 2009
Text size – +

WASHINGTON - Like others bundled against the cold on Inauguration Day, a few dozen people along the Pennsylvania Avenue parade route were determined to catch a glimpse of President Obama. But they wanted him to see their simple, unmistakable message spelled out on black-and-white signs, adding a call-and-response chant for emphasis.

"Who's our president?" one shouted.

"Who's going to arrest Bush?"

Though the new president probably didn't notice them, the protesters holding the "ARREST BUSH" placards illustrated a thorny problem he will have to confront, perhaps sooner rather than later.

While most viewed Obama's inauguration as a fresh start for the country, many on the political left - among some of Obama's most ardent supporters - want to hold George W. Bush accountable for what they believe were illegal activities in office, including misleading Congress on the Iraq war, spying on Americans, and permitting coercive interrogations that critics consider to have been torture.

While Obama has tried to discourage talk of such a politically explosive investigation, the issue surfaced during the confirmation hearings for Eric Holder, the president's choice for attorney general.

Though the full Senate confirmed Holder last night on a 75-to-21 vote, the debate had a partisan edge. Senator Patrick Leahy, a Vermont Democrat, scolded a small group of Republicans - Texas Republican John Cornyn, in particular - who threatened to block the nomination unless Holder promised he would not prosecute intelligence agents who participated in harsh interrogations.

Leahy, chairman of the Judiciary Committee, said Cornyn wanted Holder to "turn a blind eye to possible lawbreaking" before knowing whether it had actually occurred. "No one should be seeking to trade a vote for such a pledge," Leahy said.

Last month, Holder told the committee that waterboarding - a harsh interrogation technique the Bush administration apparently endorsed for use against top terror suspects - was torture. In theory, the attorney general has the discretion to take action or appoint an independent prosecutor if there were evidence of criminal wrongdoing. But politics - the appearance of partisanship, public opinion, and the president's agenda - would almost certainly play a role.

Last month, House Speaker Nancy Pelosi, the top congressional Democrat, told Fox News Channel that she favors investigations of the Bush administration and is open to prosecutions, depending on the evidence. And House Judiciary Committee chairman John Conyers of Michigan plans to set up an independent criminal probe to find out whether Bush himself broke any laws by invading Iraq and authorizing aggressive interrogations.

Meanwhile, a recent poll indicates that about half of all Americans surveyed believe Bush should be investigated for potentially illegal activities - more fuel for grass-roots activists who are keeping up the pressure with protests, petitions, and websites.

While few expect such prosecutions to go forward against Bush administration officials, let alone the former president, the continuing demand for investigations could become an increasingly larger headache for Obama.

During last year's campaign, Obama did not rule out prosecutions, but in one interview also emphasized the difference between what he called "really dumb policies and policies that rise to the level of criminal activity."

In an ABC News interview on Jan. 11, Obama said while no one is "above the law," "my orientation's going to be to move forward." On his second day as president, when Obama issued orders banning torture and closing the Guantanamo Bay detention center, he also scrapped every legal opinion and memo that justified harsh interrogations, secret CIA prisons, and detentions of terror suspects outside the judicial system.

Legal scholars say that bringing criminal charges against Bush, former vice president Dick Cheney, and other senior Bush administration officials would be a complex, highly-charged undertaking, and a conviction - even with strong evidence - would be an uncertainty at best.

"Based on what is in the public record thus far, the allegation that would have the most teeth is the one having to do with torture," said Stephen Vladeck, an American University constitutional law professor. "There is a clear prohibition under both domestic and international law on torture. It clearly applied on the executive branch. And it's pretty clear that the executive branch disregarded it on several occasions."

Bush or Cheney probably would cite as a defense their administration's expansive view of presidential power under Congress' grant of authority for Bush to pursue the war on terror "with all necessary and appropriate force." They could also invoke the decisions of President Lincoln, who suspended the writ of habeas corpus - guaranteeing a suspect's right to the courts - in the Civil War.

Vladeck said Bush administration officials would probably argue that they authorized "enhanced interrogations" to protect the country from terrorist attacks, and that "protecting the country is more important than protecting the right of the individual person."

Brian Walsh, a senior legal research fellow at the conservative Heritage Foundation, said charging the former president and his advisers is a long shot at best because any prosecutor would "have to have an abundance of evidence to start with" that they willfully broke the law against the country's best interests.

Though some liberals believe prosecuting Bush would recalibrate the limits on presidential power, Walsh said it would set a dangerous precedent and hamstring Obama and future presidents who might need that authority in a crisis. Moreover, liberals who vilify Bush as "Satan incarnate" are dragging the nation closer to a "banana republic" where political victors use their new power to destroy their enemies, he said.

"We used to think that when somebody lost an election, it was serious reproval," Walsh said.

That echoed Senator Arlen Specter of Pennsylvania, the ranking Republican on the Judiciary Committee that voted, 17 to 2, to send Holder's nomination to the full Senate.

After a private meeting with Holder about his nomination, Specter said the nominee had given him a satisfactory answer: possible prosecutions of those suspected of using torture would be decided on a case-by-case basis, and any potential defendant would have White House legal opinions on the issue as a viable defense. "I do think that President Obama has the right approach when he said that it is preferable not to look backwards but to look forwards," Specter said in a press conference last week. "If every administration started to reexamine what every prior administration did, there would be no end to it. This is not Latin America."

Yet many on the left argue the Bush White House operated with such secrecy and impunity that only full accountability - including punishment - can restore the governmental balance of power, renew the public trust, and show that not even the president is above the law.

In a radio interview earlier this month, Senator Sheldon Whitehouse, a Rhode Island Democrat, acknowledged why Obama, dealing with two wars and a financial crisis, might want to move on. But "we in Congress have an independent responsibility, and I fully intend to discharge that responsibility," he said.