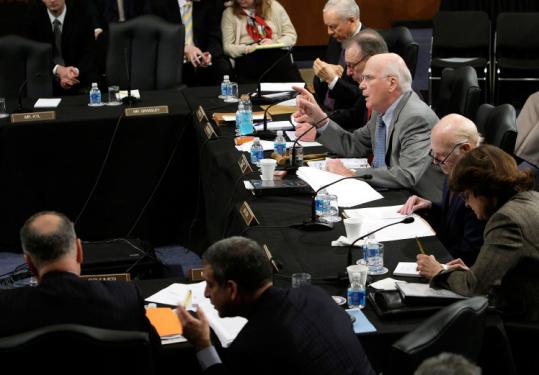 WASHINGTON - Eric Holder's nomination as the first African-American attorney general moved to the full Senate yesterday with broad bipartisan support, as Republicans who earlier criticized the nominee determined he was qualified for the job.

The Senate Judiciary Committee voted, 17 to 2, to favorably recommend Holder for the post. The only senators who voted against Holder in committee were Republicans John Cornyn of Texas and Tom Coburn of Oklahoma.

Cornyn criticized Holder's role in controversial pardons during the Clinton administration and questioned whether he would protect intelligence agents who participated in harsh interrogations.

Holder's supporters said he wouldn't be afraid to tell President Barack Obama he was wrong. They praised him for declaring that waterboarding as an interrogation technique is torture. And they said he would be tough on crime.

Several senators praised Holder for his willingness to admit he made a mistake when he told the White House he was leaning in favor of Bill Clinton's pardon of fugitive financier Marc Rich, whose wife was a major Democratic contributor.

America's northern neighbor is the traditional first stop for a new occupant of the White House.

"This is a testament, not just to the size of our trading relationship and the closeness of our alliance, but also the strength of our friendship," Canadian Prime Minister Stephen Harper told the House of Commons yesterday.

Since Parliament is not in session the week of Obama's visit, it appears unlikely he will deliver a speech there, as many in Ottawa had expected.

Obama can also be expected to visit Mexico soon, and he has also talked about stopping in the capital of a Muslim country early in his presidency.

But with his focus on the economy - he hopes Congress will have passed and he will have signed a recovery package before heading across the border - Obama might not be making too many other foreign forays for a while.

The selection is at least the third high-profile exception to a policy by President Obama that says no one who has lobbied on a set of issues within the past two years can take a role in his administration that deals with the same subject matter.

Until last April, Patterson, a Goldman vice president for government relations, acted as a lobbyist on a wide range of issues that could cover a large swath of his duties at Treasury, including mortgage foreclosure legislation, credit default swaps, bond market liquidity, and credit rating agencies. Patterson's former Wall Street firm has also received $10 billion in government bailouts in the current recession.

Patterson would be severely hampered in the new job unless he gets a waiver from the White House on grounds that it is in the public interest.

Last week, the administration granted a waiver to William J. Lynn III, the president's choice to become the Defense Department's number two official, who was registered until July as a lobbyist for .

The organization, NoLimits.org, is headed by longtime senior Clinton aides Ann Lewis and Sarah Nolan. The group has solicited the members of HillaryClinton.com, Clinton's presidential campaign e-mail list, to be part of "a new community dedicated to speaking up, sharing ideas and solving problems in our communities, our cities, our states and our world."

As the new secretary of state, Clinton must abide by strict federal laws that limit her political activity. To comply with the new rules, Clinton dissolved her political action committee, and cannot take an active role in paying off the more than $6 million her campaign still owes.

He will be President Obama's top intelligence adviser, running a budget of nearly $50 billion across 16 intelligence agencies, and replaces Michael McConnell, who resigned the post Tuesday after nearly two years in the job.