Asks all to put politics aside Shows some compromise 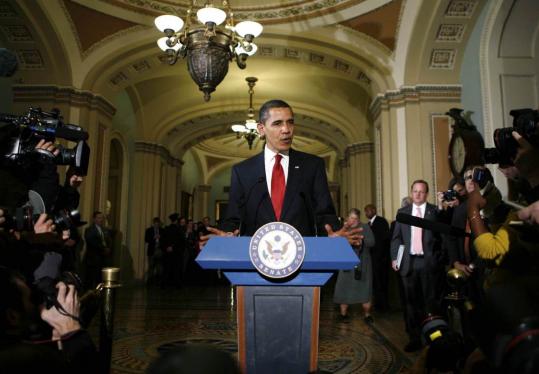 President Obama, who addressed reporters yesterday, was at the Capitol to listen to concerns from Republicans who have been threatening to oppose the $825 billion stimulus measure over what they call insufficient tax cuts and excessive spending. (Kevin Lamarque/Reuters)
By Shailagh Murray and Paul Kane Washington Post / January 28, 2009
Text size – +

WASHINGTON - On the eve of a House vote on a massive spending and tax cut package that will help to shape the success or failure of his administration, President Obama pressed Republicans yesterday to hold their fire on the economic stimulus legislation, urging them "to keep politics to a minimum" as the legislation nears the finish line.

Obama devoted nearly three hours for separate, closed-door meetings with House and Senate Republicans, an investment that is unlikely to result in new support for the relief package but could help clear the path to final passage. Participants in the meetings said Obama conceded that both the House and Senate versions of the bill had been larded with Democratic spending priorities and sought to reassure GOP lawmakers that their concerns would receive consideration during final negotiations. As a show of good faith, Obama persuaded House Democrats to drop a $335 million Medicaid provision funding contraception programs that conservatives had protested, and also reiterated an earlier pledge to consider more small-business tax relief.

But the final product is certain to fall well short of the Republican ideal of seeing a package heavy with tax breaks and light on new domestic spending, and both the White House and Democratic leaders worry that GOP lawmakers will use procedural tactics to stall a final vote as they seek to erode support for the plan with the public. The large Democratic majority in the House makes it all but certain the bill will pass the chamber today.

For Obama, the stimulus represents the first step in a broader effort to address the economy's structural problems and prevent a steeper decline, a complex process that could cost many hundreds of billions in additional funding, and will probably require Republican cooperation.

"The recovery package that we have proposed and is moving its way through Congress is just one leg in a multilegged stool," Obama told reporters during a break between the two sessions with Republicans. "We're still going to have to have much better financial regulation, we've got to get credit flowing again, we're going to have to deal with the troubled assets that many banks are still carrying."

But he acknowledged that the new era of bipartisanship he promised as a candidate has not yet firmly taken hold. "Old habits die hard," Obama said.

The House is scheduled to vote tonight on an $825 billion stimulus proposal aimed at creating 4 million jobs and giving individuals and businesses a much-needed infusion of cash. The bill includes $275 billion in tax cuts and $550 billion in spending on roads and bridges, alternative-energy development, healthcare technology, unemployment assistance, and aid to beleaguered states and local governments.

The Senate is expected to consider a separate bill next week that could carry a price tag of $900 billion, and its rising costs have resulted in the rapid shedding of GOP support. Even after Obama's appearance, only about a dozen House Republicans said they remained open-minded about backing the legislation. That group was invited to the White House last night for final lobbying with White House chief of staff Rahm Emanuel.

Obama officials said they were realistic about their prospects. "We've all seen votes in this town where a few Republicans sometimes are hard to come by or a few Democrats are hard to come by," White House press secretary Robert Gibbs told reporters after the two sessions. "We'll take what we can get tomorrow."

In lengthy exchanges with Obama, Republicans expressed concerns that the legislation would add to an already soaring deficit, complained they had been left out of the drafting process, and vented that many provisions would fail to make an immediate impact. Obama acknowledged during the House session that certain extraneous provisions had worked their way into the bill's text.

Republicans praised Obama's candor and willingness to reach across the aisle, but said he conceded little ground and probably won few, if any, converts. He staunchly defended one of their least favorite provisions, a $500-per-individual tax credit that can be claimed by people who make too little to pay income taxes but currently pay payroll taxes. Republicans oppose the so-called refundable credits, arguing they are a form of welfare.

"Feel free to whack me over the head because I probably will not compromise on that part," Obama said of the refundability portion, according to a GOP participant who took notes during the House meeting. "I will watch you on Fox News and feel bad about myself."