Geithner confirmed, sworn in at Treasury 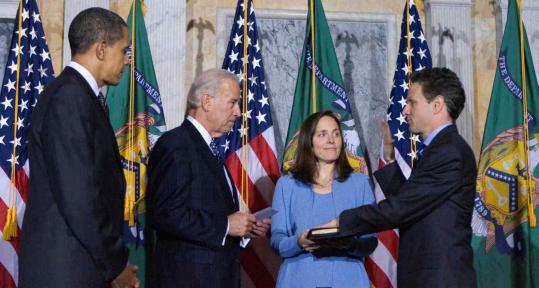 The 60-34 vote, in which handfuls of Republicans and Democrats voted against their party leaders, put Geithner at the helm of Obama's economic team as it races to halt the worst financial slide in generations.

Reflecting the urgency, Obama attended Geithner's swearing-in a little more than an hour after his confirmation. The president said Geithner has his full confidence and is needed in such dire times.

"We cannot lose a day because every day the economic picture is darkening," Obama said.

Obama and others supporting Geithner's nomination said the nation couldn't afford to wait for Obama to search for another nominee.

But some senators were concerned that Geithner, who would oversee the Internal Revenue Service, did not pay all of his taxes until he had been tapped for the president's Cabinet. Geithner called it an unintentional oversight and settled his $42,702 bill for overdue taxes and interest.

Geithner, 47, served as undersecretary of the Treasury for international affairs during the Clinton administration. As president of the New York Federal Reserve Bank, he has been key in the government's response to collapsing financial institutions and the housing and credit markets since last summer.

Ten Republicans overlooked the tax matter and voted for confirmation. "People make mistakes and commit oversights," said Senator Orrin Hatch of Utah. "Even the most intelligent and gifted - two adjectives that certainly apply to Mr. Geithner - make errors in their financial dealings."

One Republican, Senator Arlen Specter of Pennsylvania, told reporters earlier in the day that he would vote yes, but he ultimately voted no. Three Democrats and one independent voted against Geithner's confirmation, including Senator Robert C. Byrd of West Virginia. "Had he not been nominated for Treasury secretary, it's doubtful that he would have ever paid these taxes," Byrd said in a statement.