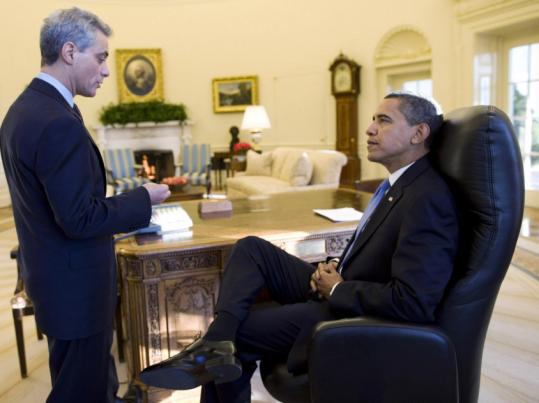 WASHINGTON - Signaling a swift and sweeping break with his predecessor, President Obama yesterday prepared to issue an order closing the controversial Guantanamo Bay terrorist detention center, called in top military commanders to plan the withdrawal of US troops from Iraq, and signed a series of executive orders designed to limit the influence of lobbyists and make government more open.

In his first full day in office, Obama also huddled with his key economic advisers and - in a symbolic, share-the-sacrifice move - announced he was freezing the pay of about 100 senior White House staffers making more than $100,000 a year. "Families are tightening their belts, and so should Washington," he said.

The burst of activity gave Obama a running start on his foreign and domestic policy agendas and fulfilled several campaign pledges that were crucial to the support he received from core Democratic constituencies. But his first actions also seemed explicitly designed to sweep away lingering policies of former President Bush, who left office Tuesday as one of the most unpopular chief executives in US history.

Though the economy has dominated Obama's attention since the election, the most dramatic moves he made yesterday involved the Guantanamo detention center, created under Bush and decried around the world as a violation of human rights.

At Obama's direction, Secretary of Defense Robert M. Gates yesterday requested - and tribunal judges agreed to - a 120-day suspension of the trials of terrorism suspects at the military-run facility in Cuba. The suspensions include the ongoing trial of the five members of the Al Qaeda network accused of planning the Sept. 11, 2001, terrorist attacks, and the proceedings of a Canadian who allegedly killed an American soldier in Afghanistan.

As a candidate, Obama pledged to end the special military commissions to try terrorism suspects, which rely on secret evidence and have no independent appeals process. He said he wants to establish a more transparent legal framework to try terrorist suspects in either standard military or civilian courts while transferring the rest to other countries.

The suspension of the Guantanamo trials is seen as the first step toward closing the controversial prison altogether. Obama's advisers have already drafted an executive order for his signature that would shutter the detention center within a year. Closing the facility "would further the national security and foreign policy interests of the United States and the interests of justice," states the draft order, obtained yesterday by the Associated Press, which reported that Obama plans to sign it today.

Longtime advisers on the issue said Obama would probably establish a team to conduct a case-by-case review of the evidence against all 245 detainees remaining at the prison with the aim of sending as many as possible back home. The governments of Ireland and Switzerland signaled yesterday that they would be open to resettling some of the inmates should the United States not be able to return them to their home countries and did not want to keep them.

"With the stroke of a pen, President Obama will make great progress toward restoring America's moral authority," Jennifer Daskal, senior counterterrorism counsel at Human Rights Watch, said in a statement. "By shutting down a global symbol of abuse, he will deprive terrorists of a powerful recruitment tool."

But other human-rights advocates were not satisfied.

"It only took days to put these men in Guantanamo, it shouldn't take a year to get them out," said Vincent Warren, executive director of the Center for Constitutional Rights, which provides many of the detainees with legal representation. "President Obama should commit to dismantling the military commissions, not just suspending them, and to prosecuting any cases before federal criminal courts - real courts with real laws."

In another break from Bush, Obama also huddled yesterday with his top military commanders to act on another major foreign policy goal: formulating a plan to pull the vast majority of American combat troops out of Iraq within 16 months.

In late afternoon, Obama convened a closed session in the White House Situation Room with top Pentagon and military leaders, including Gates; Admiral Mike Mullen, chairman of the Joint Chiefs of Staff; General David Petraeus, the head of the US Central Command; by video link, General Raymond Odierno, the top commander in Iraq; and Ryan Crocker, the US ambassador to Iraq.

A senior Pentagon official said the meeting was intended to focus solely on Iraq, an opportunity for the new commander in chief to hear firsthand from his top field generals and get their advice on how to end the war without jeopardizing the military's hard-won gains.

After the meeting, Obama said in a statement: "I asked the military leadership to engage in additional planning necessary to execute a responsible military drawdown from Iraq. In the coming days and weeks, I will also visit the Department of Defense to consult with the Joint Chiefs on these issues, and we will undertake a full review of the situation in Afghanistan in order to develop a comprehensive policy for the entire region."

Earlier in the day, the Army's vice chief of staff provided a flavor of the cautionary warnings Obama could expect from the top brass, telling reporters that any withdrawal plan has to be carefully drawn. "You can pick up and leave anything very quickly, but if you do, you'll leave it in a certain condition that won't be as good if you went through a certain deliberative process," said General Pete Chiarelli.

Also yesterday, the president phoned four Mideast leaders - President Hosni Mubarak of Egypt, Prime Minister Ehud Olmert of Israel, King Abdullah II of Jordan, and President Mahmoud Abbas of the Palestinian Authority - to reinforce his promise to push for Arab-Israeli peace and to strengthen the Gaza cease-fire by helping on ways to prevent the smuggling of arms and to rebuild the devastated territory. Former Senator George Mitchell of Maine is expected to be named special envoy for the Mideast for new Secretary of State Hillary Clinton.

On domestic policy, Obama signed an executive order to shut the revolving door between lobbyists and government, banning former lobbyists from working in government agencies they had courted or from getting involved in policies they lobbied on. The order also bars officials who leave his administration from working as lobbyists for two years after their departure.

The president also vowed to make his administration more open and transparent, issuing a memorandum requiring federal agencies to "adopt a presumption in favor of disclosure" when the public seeks government records under the Freedom of Information Act and a separate executive order designed to make presidential records more accessible.

Obama told assembled White House staffers that they are now public servants. "We need to make the White House the people's house," he said, saying his actions represent a "clean break from business as usual."

Before getting down to work, Obama observed several traditions yesterday.

Arriving in the Oval Office for the first time as president, he read a personal note that George W. Bush left him in an envelope addressed, "To: #44, From: #43." Then, Obama and first lady Michelle Obama attended a prayer service at the Washington National Cathedral, sharing a front pew with Vice President Joe Biden, his wife Jill Biden, former President Clinton and Hillary Rodham Clinton.

Later, Obama began a tradition of his own, hosting an open house with his wife. They greeted a steady stream of visitors to the White House.

"Enjoy yourself, roam around," a smiling Obama told one guest. "Don't break anything."