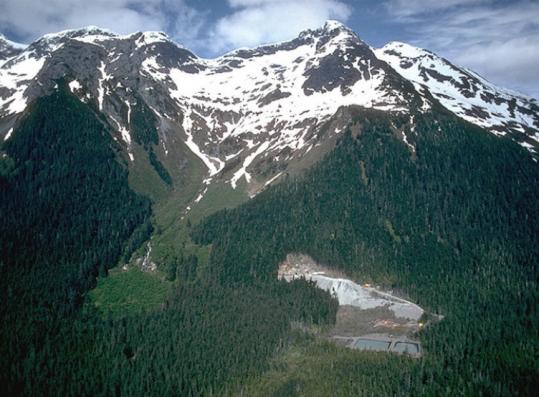 WASHINGTON - A lawyer representing an Alaska gold mine urged the Supreme Court yesterday to uphold the mine owner's permit even though he acknowledged that the company's plan to dump metal waste into a nearby lake would kill all aquatic life.

But mining company lawyer Theodore Olson told justices that the waste is more accurately defined as "fill." And, after a decade or more of mining, he said, the lake could be restocked with no permanent harm to the environment.

"There will be more fish in a bigger lake, and more livable conditions for the fish and the aquatic life after this process is finished," Olson said.

Justice David Souter called that logic "Orwellian." He said the mining company, Coeur Alaska Inc., and the US Army Corps of Engineers, which granted a permit for the mine, were "defining away" the problem by calling the wastewater discharge fill.

"When you are destroying the entire living [bodies] of this lake, it seems to me that it's getting Orwellian to say there are rigorous environmental standards," Souter said.

Other justices appeared to disagree, noting that an alternative to the dumping would destroy nearby wetlands and create a stack of tailings larger than the Pentagon.

"Isn't it arguable that the best place for really toxic stuff is at the bottom of a lake so long as it stays there?" asked Justice Antonin Scalia.

The Army Corps of Engineers in 2005 issued a permit for waste disposal at the proposed Kensington mine north of Juneau. Under the plan, tailings - waste left after metals are extracted from ore - would be dumped into Lower Slate Lake.

Environmentalists sued to halt the practice, saying that dumping the mine tailings in the lake would kill fish. A federal appeals court blocked the permit, saying the dumping is barred by stringent Environmental Protection Agency requirements under the Clean Water Act of 1972.

The company and the state of Alaska appealed the ruling, setting the stage for yesterday's hearing.

The high court's decision in the case could set a precedent for how mining waste is disposed of in the nation's streams, rivers and lakes.

A ruling in favor of the mining company could allow such waste to be dumped into waterways throughout the United States, said Tom Waldo, a lawyer with the environmental group Earthjustice.

"The whole reason Congress passed the Clean Water Act was to stop turning our lakes and rivers into industrial waste dumps," Waldo said.

Waldo said about 1,000 trout-like fish known as Dolly Varden char live in the 23-acre lake. He said the lake and the brightly colored fish were unlikely to recover from mining operations that could last up to 15 years.

Waldo called Olson's arguments that the lake could be restored dubious, and said the mining industry has a poor track record in repairing environmental damage.

Olson, a former US solicitor general, said tailings from the Kensington mine would be inert sandy material, and almost half would be recycled back into mine operations. He called the land-only alternative for disposal unacceptable.