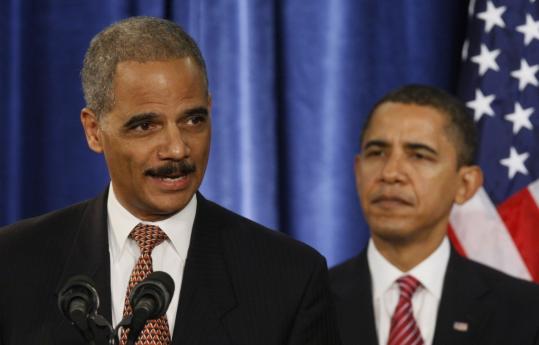 Republicans have vowed to press Eric Holder, tapped by President-elect Barack Obama to be attorney general, about how his corporate ties would affect work at the Justice Department. (Charles Dharapak/Associated Press)
By Eric Lichtblau New York Times / January 11, 2009
Text size – +

WASHINGTON - Chiquita was facing the prospect of federal charges for paying protection money to Colombian terrorists to safeguard its banana crops, and the company needed help. It turned to Eric H. Holder Jr., an elite Washington lawyer well versed in the ways of the Justice Department.

"We were in an extraordinarily difficult position," James E. Thompson, the general counsel for Chiquita, recalled in an interview last week. As a former prosecutor, Holder "carries a level of credibility with him, and that's a valuable commodity," he said.

Holder, now President-elect Barack Obama's pick for attorney general, made his name publicly during a quarter-century in government service, first as a corruption prosecutor, then as a judge, and finally as the second-ranking official in the Clinton Justice Department. But it is as a power lawyer in Washington over the last eight years that Holder, 57, has made his wealth, as well as a reputation as a legal fixer for clients in crisis.

The Senate Judiciary Committee is to begin confirmation hearings on Holder on Thursday. If he is confirmed, he will take over at the Justice Department with perhaps the most extensive private practice of any attorney general in modern times. Admirers see his impressive range of work as a sign of a lawyer who has seen the law from all sides.

But some Republicans plan to press Holder about what they view as potential conflicts of interest posed by his client list and how he would go about deciding whether to bow out of issues that come before him involving past clients, staff members said. Others question how his corporate ties will affect his work at the Justice Department.

"We've had eight years of an administration that turned a blind eye to corporate criminals," said Terry Collingsworth, a Washington lawyer who is suing Chiquita over the Colombian protection money and is facing Holder in the case. "We need someone with his level of experience and cachet to clean up the Justice Department. Yet I do have a concern, and I sure hope that he doesn't carry over his corporate defense practice into his approach to the job and how he handles these types of cases."

When the National Football League was facing a legal and public-relations disaster in 2007 over a dog-fighting scandal involving Falcons quarterback Michael Vick, it turned to Holder to help navigate the maelstrom. The pharmaceutical giant tapped him as its lawyer in a Medicaid overbilling case that ended in a $671 million civil settlement. And Rod R. Blagojevich, the now-impeached governor of Illinois, picked him, briefly, to investigate for the state of Illinois a controversy over a casino development and possible ties to organized crime.

Holder's brief association with Blagojevich has drawn scrutiny from Republicans, who are waging a more spirited campaign against Holder's nomination than many had anticipated. Until now, most of the scrutiny has focused on controversies during the nominee's time as deputy attorney general at the end of the Clinton administration, particularly his role in the pardon of fugitive financier Marc Rich.

In responding to written questions from the Senate Judiciary Committee, Holder made no mention of a 2004 announcement in which Blagojevich introduced him as a "special investigator" under a $300,000 contract with the state.

The appointment fell through, and Holder's aides said his failure to mention the episode was an oversight that was soon corrected. But some Republicans said they were troubled by the omission.

Senator Arlen Specter of Pennsylvania, the ranking Republican on the Judiciary Committee, sharply questioned Holder's character and political independence in a speech last week on the Senate floor. Specter told reporters on Friday that he wanted to see more information about Holder's private practice, to assess whether he is up to the job of attorney general.

"Covington & Burling is a very prominent, prestigious firm," Specter said. He said Republican investigators had not yet found anything untoward in Holder's private practice, but added, "We're looking through all his records."