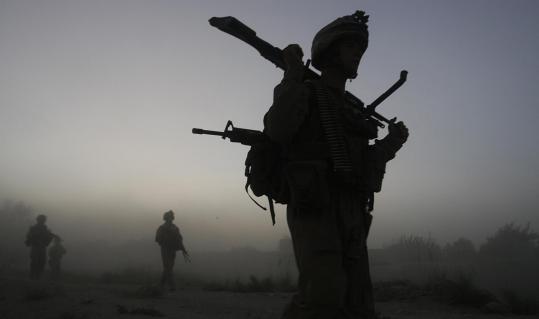 WASHINGTON - Buoyed by more recruiters, bigger bonuses, and an elite reputation, the Marine Corps has grown by nearly 27,000 members in a little more than two years - half the time that military officials believed it would take.

While the rapid expansion has stretched the Marine budget and put some recruits in temporary or quickly refurbished barracks, it is also easing the strain on Marine forces tapped for duty in Iraq and Afghanistan.

According to Brigadier General Robert Milstead Jr., commander of Marine Corps Recruiting Command, the Marines brought on more than 500 additional recruiters and increased the budget for recruiting bonuses from $66 million in fiscal year 2007 to $89 million in 2008.

At the same time, as more recruits were coming in the doors, military leaders also launched a campaign to get more current Marines to reenlist for another tour. In the fiscal year that ended Sept. 30, the budget for retention bonuses was $464 million, and that amount was boosted to $469.5 million for the current fiscal year.

The bonuses made their mark. In fiscal 2008, 35 percent of active duty Marines reenlisted, compared with 24 percent two years ago.

As the size of the Marine Corps grew, officials increased the number of battalions from 24 to 27 and bolstered the ranks of critically needed specialties, including linguists, cryptologists, and intelligence officers.

By 2007, Pentagon leaders approved plans to grow the Marines and the Army, the two services that have borne the brunt of combat duties for the wars in Iraq and Afghanistan, serving long and multiple tours in both countries.

Plans are to increase the numbers of active-duty Army, Army Guard, and Army Reserve troops by 74,000 overall, with the active-duty force growing by 65,000 to a total of 547,000. A year ago, top Army leaders projected that they could accomplish their goal by 2010 - also earlier than initially thought.

Lieutenant Colonel Mike Moose, an Army spokesman, said the Army had grown to nearly 541,900 soldiers by the end of October. The active-duty troop increase will boost the number of Army combat brigades from the 2006 level of 42 to 48.

The Marine increase is already paying off.

"We're already starting to see the injection of those units into the rotation schemes," said Conway, adding that putting just one more infantry battalion into the mix helps to extend the time other units get to spend at home between deployments.

He said the top priority was to get more people into high-stress units, including intelligence, reconnaissance, and surveillance jobs.

"We went early and often to those people, and they were being ridden hard," said Conway. He said it's taken longer to fill out gaps in aviation units, because of the extra time it takes to get the aircraft and other equipment to them.

Marine leaders said retention rates may be benefiting a bit from the economic meltdown. Marines and their families may be deciding that now is a good time to stay on and wait out the plunging job market, said Milstead.

With the expansion all but over, Milstead said he has told Conway he can reduce the pool of roughly 4,000 recruiters by more than 130 over the next two years - shifting those Marines back into other jobs. And the retention pressure will also ease.

That will be accomplished, Milstead said, by cutting reenlistment opportunities.