Kennedy to step down from Judiciary panel

Health reform a priority, he says 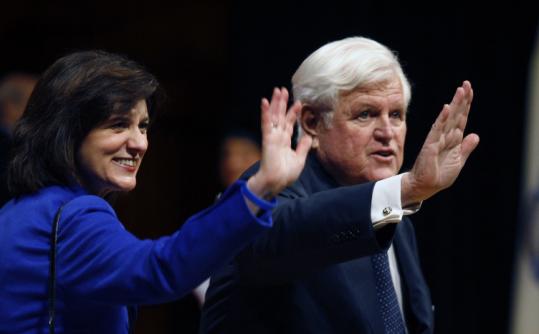 WASHINGTON - Senator Edward M. Kennedy said yesterday he will step down from his powerful post on the Senate Judiciary Committee, where he led memorable battles against Republican judicial nominees, so he can concentrate on healthcare reform.

Kennedy, who is battling an aggressive brain tumor, said he is determined to return to the Senate in January to work for passage of universal healthcare coverage, which he has been advocating for most of his 46-year career in the Senate.

"As chairman of the Senate Health, Education, Labor and Pensions Committee, I expect to lead a very full agenda in the next Congress, including working with President Obama to guarantee affordable health care, at long last, for every American," Kennedy said in a statement.

"This is the opportunity of a lifetime, and I intend to make the most of it," Kennedy added.

In stepping down from the Judiciary Committee, Kennedy leaves a panel he has served since 1962, the same year he joined the Senate. For decades, he fought fiercely for civil rights and immigration reform, and waged legendary battles against a number of Republican judicial nominees. Kennedy was instrumental in bringing down the nomination of Judge Robert Bork, whom President Reagan nominated to the Supreme Court in 1987.

"Robert Bork's America is a land in which women would be forced into back-alley abortions, blacks would sit at segregated lunch counters, rogue police could break down citizens' doors in midnight raids, schoolchildren could not be taught about evolution, writers and artists could be censored at the whim of the Government, and the doors of the federal courts would be shut on the fingers of millions of citizens for whom the judiciary is - and is often the only - protector of the individual rights that are the heart of our democracy," Kennedy said in a floor speech opposing the selection. Bork's nomination was ultimately defeated.

Kennedy is also honoring a request by Senate Majority Leader Harry Reid of Nevada, who asked Democratic caucus members last month to give up some of their committee assignments to make room for the eight new Democrats elected to the Senate.

Kennedy was diagnosed with a malignant glioma, a lethal brain tumor, in May, and underwent surgery in June, but has continued to work from his home on Cape Cod and occasionally from his Senate office. Kennedy spoke at the Democratic National Convention in August - despite having kidney stones, as well as the tumor - and returned briefly to the Senate late last month.

Kennedy, 76, and his staff have been working throughout his illness on developing a national healthcare plan that would cover the nation's 47 million uninsured. Kennedy is vacationing in Florida but expects to be back in Washington for the start of the next Congress.

Kennedy and his team have been holding regular meetings with interest groups and working with other senators to determine the basics of a health reform bill his office has said he hopes to prepare by President-elect Barack Obama's inauguration.

Ron Pollack, president of Families USA, a left-leaning health consumer advocacy group that is working closely with Kennedy and a spectrum of other interests on health reform, said Kennedy's decision to forsake his spot on the Judiciary Committee would "enable him to focus his enormous energies on that task which he has said is his first, second and third priority."

Pollack noted the Judiciary Committee is charged with the time-consuming tasks of handling confirmation hearings on the attorney general and judicial appointments, in addition to its legislative responsibilities.

"If one is really devoted to an enormous cause that has been difficult to achieve in the past, it really is helpful to have that extra time to devote to that effort," he said.

Lisa Wangsness of the Globe staff contributed to this report.