Pledge to make their firms lean, their cars better 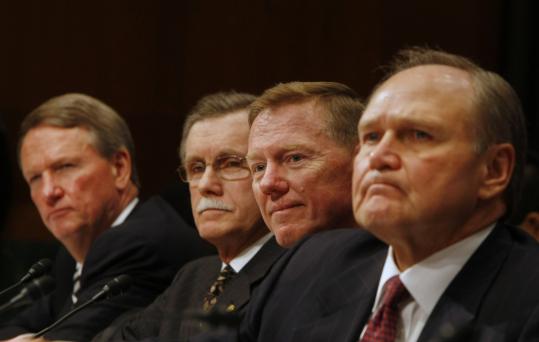 WASHINGTON - Amid warnings of a cataclysmic impact on the economy, the top executives of the Big Three automakers and the United Auto Workers pleaded yesterday with a skeptical Senate panel for a $34 billion lifeline to stay in business while they remake themselves into leaner companies that emphasize fuel-efficient vehicles.

But the fate of the appeal remained unclear, as even supportive senators looked for ways to provide the money while avoiding a direct vote that could go against the companies.

Chastened executives of GM, Ford, and Chrysler, who were pilloried last month when they arrived on corporate jets with their hands out for $25 billion, appeared at yesterday's Senate Banking Committee hearing after driving hybrid vehicles to Washington, increasing their request by $9 billion, and providing much more detail about their proposed paths to viability, including pledges to cut the number of dealerships and to take only $1 a year in pay if they get the aid.

The executives assured senators the money would help them retool their businesses and help them build fuel-efficient cars that Americans would buy. GM chief executive Rick Wagoner, who said his company needed $4 billion immediately to avoid bankruptcy by the end of the month, presented a more contrite stance, saying, "We made mistakes, which we're learning from."

Mark Zandi, a economist who was praised by members of both political parties, delivered a stark warning that the companies would probably be back to ask for as much as $125 billion. Yet he still urged Congress to hand out the funds in carefully overseen stages in order to save the companies from bankruptcy. "Failure at this time will be cataclysmic for the economy," Zandi said. "I really believe that."

Senators appeared divided over whether the full lame-duck Congress should return next week to act on the request for a total of $34 billion in loans and lines of credit amid uncertainty about whether there would be enough support for the package.

Senator Chris Dodd of Connecticut, the panel's chairman, backed the plea for help, saying that if the automakers fail, the consequences would be severe and sweeping throughout the economy. Inaction, he said, "plays Russian roulette with the entire economy of the United States."

But the committee's ranking Republican, Senator Richard Shelby of Alabama, strongly opposed any bailout. And Senator Bob Corker, a Tennessee Republican, grilled Chrysler boss Robert Nardelli over whether the privately owned company was trying to be sold a competitor and wanted its $7 billion only to make such a deal possible.

After Nardelli denied that motive, Corker said, "There's not a human being alive in the automobile industry who thinks that Chrysler is doing anything other than looking for someone to marry."

On the other hand, Ford executive Alan Mulally, who said his company hoped not to tap the line of credit, repeatedly was singled out for praise for having taken some early refinancing steps to protect his firm.

With so many senators expressing skepticism about the loans, supporters of the measure spent much of the hearing exploring how to get money to the companies without requiring a vote by Congress next week.

Dodd began the hearing by saying that the Bush administration could take the money from the previously appropriated $700 billion for the financial industry, an idea that House Speaker Nancy Pelosi and Senate Majority Leader Harry Reid also suggested in a letter yesterday to President Bush, but that the White House has consistently opposed. "No matter how important the autos are to our economy, we don't want to put good money after bad," Bush said in an interview aired last night on NBC.

Dodd also said that the Federal Reserve Board could loan the money, just as it has done for some financial institutions. Some senators said the companies could be given some money from a previously appropriated $25 billion fund that was supposed to be used by the automakers to retool their factories to build hybrid and electric vehicles.

Dodd repeatedly blasted the Bush administration and the Federal Reserve Board for rejecting his request to send representatives to the hearing to explain why they weren't using existing pools of money to help the automakers. After the hearing, an angry Dodd told reporters that Treasury Secretary Henry Paulson should return from an overseas trip to deal with the crisis.

The panel did not vote on any proposal, but Dodd vowed to work through the weekend to try to come up with a compromise that has a chance of passage.

Michael Kranish can be reached at kranish@globe.com