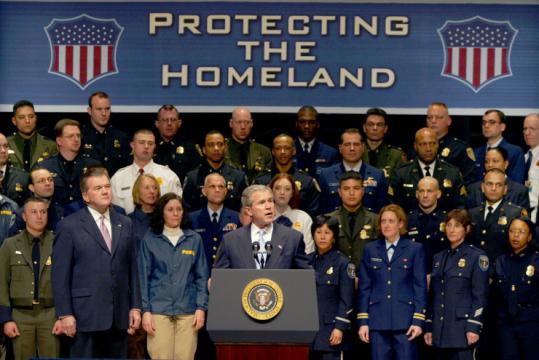 WASHINGTON - As the Department of Homeland Security prepares for its first transition, a series of major projects - including a communication network linking state and locals officials in a crisis, a system to scan shipping containers for terrorist weapons, and a massive border-control initiative - face serious technical delays or cost overruns.

In addition, the agency is struggling in its relationship with Congress, where it answers to dozens of committees with jurisdiction over its operations - a chaotic structure that requires a large number of personnel simply to respond to lawmakers' requests.

And with an estimated three-quarters of its headquarters staff having less than two years of experience managing the agency's $50 billion-a-year operation, there is an urgent requirement to invest in "human capital," according to interviews with more than a dozen current and former senior government officials.

The result, they say, is disarray at the federal department responsible for developing the nation's defenses against terrorism and natural disasters. With a variety of key security measures in limbo - the department has yet to implement laws requiring that maritime cargo be scanned for nuclear materials and that hazardous materials be rerouted around urban areas - the incoming Obama administration is facing what one adviser to the president-elect described as a "superhuman task."

"There are significant and pervasive management challenges," said David Heyman, director of the Homeland Security Program at the nonpartisan Center for Strategic and International Studies in Washington and coauthor of a new report, Homeland Security 3.0, a blueprint for strengthening domestic preparedness. "There is still much to be done."

The challenges identified by current and former government officials cut across the vast department, which combined 22 government entities when it opened its doors in 2003.

A major task is managing large investment programs - many of which are in trouble.

"The least progress has been made on management," said Cathleen Berrick, director of homeland security and justice at the Government Accountability Office, the investigative arm of Congress. "But it is very important. That is how they let contracts and oversee programs. It is such a huge challenge."

The list of problem-plagued programs includes the $24 billion "Deepwater" project to build a fleet of Coast Guard vessels, helicopters, and other high-tech gear that is experiencing major delays and ballooning costs.

The Secure Border Initiative, costing more than $2 billion this year alone, is a major effort to increase Customs and Border Protection personnel, introduce detection technologies, and construct a fence along the border with Mexico. But major elements of the project, including a network called SBInet to ensure different agencies can coordinate, have been put on hold pending further testing and development.

Meanwhile, although recent intelligence assessments have warned that a biological attack poses the greatest terror threat, signature defense measures - including the multibillion-dollar Project Bioshield to stockpile antidotes - have made only limited strides, according to Tom Ridge, the first secretary of homeland security.

"There has been a modest amount of work done in that venue, candidly," Ridge said in a recent interview. He said Americans "have spent billions on the development of a bio-defense stockpile but they don't have much to show for it."

Specialistrs in the field have criticized the process by which the Department of Homeland Security determines which biological threats to defend against. Another struggling program is the Homeland Security Information Network, designed to allow "all states and major urban areas to collect and disseminate information between federal, state, and local agencies involved in combating terrorism."

"That platform," said Heyman, "has increased in cost and has performance shortfalls and delayed schedules."

Ridge, who served as homeland security chief from 2003 to 2005, said that getting a handle on the procurement system at the department will be a chief challenge for the new administration. "The system is a mess and it is crying out for reform," he said.

According to the GAO, homeland security "has not developed clear and transparent policies and procedures" and "lacks a sufficient acquisition workforce to implement and oversee its complex and varied procurement needs."

But the challenges don't stop there. The department has made some progress improving coordination with state and local officials - the so-called first responders in the event of a disaster - but still has very far to go, according to officials.

The Homeland Security Advisory Council, an internal body headed by Judge William L. Webster, a former director of the FBI and CIA, concluded in a recent report for the next administration that improving intelligence-sharing will be a "key challenge."

The new leadership needs to "improve the quality, timeliness, and operational utility of intelligence and information-sharing systems with all Homeland Security partners," including the private sector, the advisory group wrote.

Ridge agrees: "You can't secure the country from inside the Beltway."

But the department's masters on Capitol Hill are considered a big part of what is holding it back.

But committee and subcommittee chairmen with oversight responsibility - by some counts as many as 89 - simply do not want to cede any power.

The likelihood of congressional oversight reforms is "about as good as you climbing Mount Everest without oxygen," Ridge said, though he held out hope that a Democratic president dealing with a Democrat-controlled Congress can do something to improve a committee structure he said "is ugly. It is god awful."

In the short term, however, the team chosen to run the department may make the biggest difference, specialists said.

With the prospect of a terrorist attack at any moment - and the transition period considered particularly attractive to terrorists - the department needs a new leadership team that can take over almost seamlessly, according to members of the current and incoming teams.

"At the Justice Department you can postpone cases if you have to," said one Obama adviser who asked not to be identified because he is not authorized to speak to the media. But at Homeland Security, "you have to be operational on day one."

Many specialists, like Ridge, believe Obama - who news reports say is planning to nominate Governor Janet Napolitano of Arizona to replace Michael Chertoff as homeland security chief - will retain some senior appointees.

"It has only been up since March 1, 2003," Ridge said. "It would be nice to have some people around who have been there, regardless of what their party affiliation is."

It was inundated with briefing books and other materials spelling out the Herculean task ahead, according to officials involved.

"We have had very wide-ranging conversations, " Rear Admiral John C. Acton, director of the homeland security presidential transition team, said in an interview.

He said what the new team needs most is "correct, accurate information" about the department's operations and a "very candid" assessment of the challenges ahead.

"We will do everything to help this team succeed," he said.