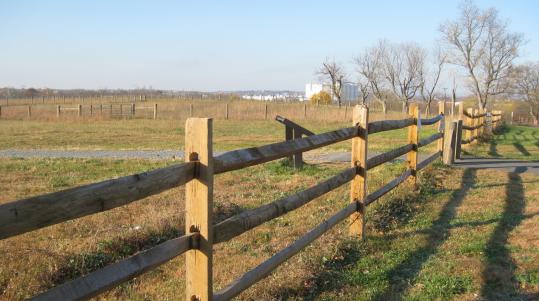 A $3.35 million land sale will preserve 209 acres of woods and hayfields on one of Northern Virginia's most significant battle sites, where Yankee and Rebel forces waged brutal hand-to-hand combat for control of the Shenandoah Valley. (Civil War Preservation Trust via the Washington Post)
By Nick Miroff Washington Post / November 23, 2008
Text size – +

WASHINGTON - In 1762, the Huntsberry family settled the land along Redbud Run, outside Winchester, with a deed from Lord Fairfax. Eight generations later, Bob Huntsberry spent his summers there as a child, finding old minie balls that had been fired from the muskets of Civil War soldiers. He grew up steeped in elders' stories of the day, late in the summer of 1864, when Union General Philip Sheridan and 39,000 troops came marching in.

Now, Huntsberry, 80, has reached a $3.35 million deal with Civil War preservation groups to protect the land and with it, the little-known legacy of a decisive event in the war.

The sale will preserve 209 acres of woods and hayfields on one of Northern Virginia's most significant battle sites, where Yankee and Rebel forces waged brutal hand-to-hand combat for control of the Shenandoah Valley. Preservation groups will add the land to their holdings to create a 575-acre park with trails, interpretive signs and free public access.

"The historic significance of this site is huge in every way," said Elizabeth Paradis Stern, assistant director of the Shenandoah Valley Battlefields Foundation, describing the site as possibly the second-most important in Northern Virginia after Manassas National Battlefield Park. Her organization arranged the deal as part of a public-private partnership with the state and the Civil War Preservation Trust. A $1 million grant from the state will contribute to acquiring the land, and by May the two preservation groups will need to raise the remaining $2.35 million through grants and private donations.

"There is a lot of meaning in those farm fields," Stern said.

The National Park Service calls the clash, known as the Battle of Third Winchester or the Battle of Opequon, "a turning point in the war" and had deemed the battlefield a top preservation priority, writing, "Because of its size, intensity, and result, many historians consider this the most important conflict of the Shenandoah Valley."

The Huntsberry family was living there and tending its fields when Sheridan launched his scorched-earth Shenandoah Campaign in late summer 1864. Sheridan's forces met Lieutenant General Jubal Early's Confederate troops Sept. 19, and the battle became the largest of the war in the Shenandoah Valley, with almost 9,000 casualties, according to the Park Service.

Park Service historians have described the close-quarters fighting that took place as extremely fierce and "sanguinary." One soldier called a wooded area along Redbud Run where 1,500 men died or were wounded a "basin of Hell."

Two future presidents, Rutherford B. Hayes and William McKinley, saw their first combat in the battle, according to the Civil War Preservation Trust.

Union forces sustained heavier losses but won the battle, the first step in wresting strategic control of the Shenandoah Valley from the Confederacy. "It ended the valley as a source of food for the Confederacy and an avenue of invasion to the North," said Jim Campi, spokesman for the Civil War Preservation Trust.

His foundation owns 222 acres on the site that are contiguous with 144 acres owned by the Shenandoah Valley Battlefields Foundation, and interpretive trails on those portions opened to the public last year. But Campi said the purchase of the Huntsberry family's 209 acres will make the site into a bona fide tourist destination.

"Prior to this, folks would visit for a half-hour or less," he said. "Now people will be able to go out and get lost for hours in the history and beauty of the property. It has essentially been kept as pastureland for 150 years, so it is very much like it was at the time of the battle."

Campi said the preservation groups would conduct extensive archeological and resources studies on the property before hosting any large-scale events, such as battle reenactments.